Manav Kaul: An Actor in Search of a Character

At home in films and theatre, Manav Kaul shuttles between the art house and the mainstream 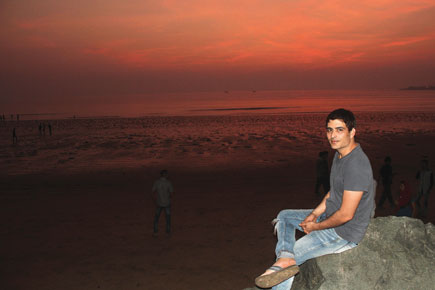 Every few years, an actor in Hindi cinema comes along who breathes new life into a performance. His embrace of that role makes us believe that we have never known him before that moment on screen.

It happened with Kumud Mishra in Rockstar (2011), Neeraj Kabi in Ship of Theseus (2012) and Manav Kaul in Kai Po Che (2013). Kaul stood out as the soft-spoken and conniving right-wing politician responsible for the 2002 Gujarat riots in the film.

Kaul chose to play the political goon with poise and class. Behind a shrewd mind was a smile which stayed with him through the film, and remains intact even three years after its release. “The director thought my smile won’t work for the character as I may end up looking too innocent. Incidentally, it’s what worked the best,” says Kaul carefully pouring black coffee into two sparkling white cups sitting on his kitchen platform. Like a true theatrewaala, he first offers me some hot adrak ki chai till he decides to beat his fatigue with black coffee.

Kaul has just landed in Mumbai after a hectic week, where he staged the last three shows of his play Colour Blind at Prithvi theatre, juggled the release of his latest film Wazir and spent the weekend in Lucknow acting in his own play Peele Scooter Wala Aadmi. “I feel like a storm has just passed. It feels so good to be back home,” he says, politely asking for permission to roll his own cigarette.

We are in his modest apartment on Yari road, Mumbai, where the soft evening sun shines on the walls dotted with his own paintings and posters from his plays. His bookshelves brim with works by Hindi and Russian literary legends.

His phone’s been ringing off the hook with congratulatory texts for Wazir, in which, he says, he literally has three scenes. “I play a minister responsible for some major mishaps in the system. In fact, I said ‘no’ to Wazir twice before I was absolutely sure I wanted to do it. But when I saw the film, I realised how the whole story revolves around my character,” says Kaul, who is being lauded for a stand-out performance in a seemingly mediocre film. “When I thanked Bachchan sahab for sharing screen space with me, he said, ‘Aapne bahut adbudh kaam kiya hai.’ As an actor if I’m looking for some validation, I couldn’t have asked for more,” he adds.

Kaul’s first movie as an actor was Jajantaram Mamantaram, back in 2003. But it is only now that his true potential is coming to the fore. Kaul picks roles which are tinged with grey, be it the politician in Kai Po Che or the security man in CityLights (2014).

His understanding of human behaviour shines through in the way he depicts his characters. “I don’t understand negative and positive roles. All I know is that we all react according to our circumstances and experiences and that’s what I try to do with my characters,” says Kaul, whose life has been as varied as the experiences he depicts on screen.

He was born in and spent many years in Baramulla in Jammu & Kashmir, and belongs to a generation of Kashmiri Pandits who fled the state due to unrest. Though he did not witness much of the violence personally, he recalls the tension well. “I clearly remember my home in Khawaja Bagh—the walls, the texture, the smells, the sounds. I lived with my mother in Hoshangabad in Madhya Pradesh after class 5, but I used to visit my father now and then in Srinagar. I remember we had once gone to watch a film but it was stopped in between because of some communal tension. My father had to flee the state because his office was blown up in a terror strike. Though I was too young to understand what was happening, I had a sense of the worry my family faced at that time,” he says.

He spent the rest of his childhood in Madhya Pradesh, where he was groomed as a national level swimming champion and was introduced to Hindi literature by his mother.

“As a young boy, I used to often jump into the river near my home to find some money to buy myself breakfast. It was a routine with me and my friends and that’s how I was discovered as a swimmer. By the time I was 18, I was the third-best young swimmer in India… but I left everything for theatre.”

He distinctly remembers reading Chadrakanta by Devaki Nandan Khatri. “I was a terrible student, but when I read this book, I realised how much pain words carry within them. People learnt Hindi just to be able to read Chandrakanta. I used to pick up the 10-rupee translated versions of books by Maxim Gorky, Dostoyevsky, Mayakovsky, without even realising how legendary they were. A few years later I watched a street play in my village, and realised this is what I want to do.”

As a swimming champion it was not easy to give up a promising future as a sportsman, but Kaul made a choice: he wanted to act. He recalls vividly the day when he first landed in Bombay. “I waited in the train till everyone had left, wondering why ‘Bombay’ station was not arriving. I asked around and someone told me that this was Bombay!”

It has been 17 years since, and Kaul says that his journey has been something of a potboiler. From sleeping at railway stations to sharing a room with five other actors, to being picked up by the police as a suspect for Gulshan Kumar’s murder, Kaul’s life has taken many a twist and turn. “We’d sleep late and wake up late so we could skip meals because we did not have any money. Thankfully, I started working with Satyadev Dubey, who taught me what the stage is capable of.”

He was soon a thriving young theatre actor in Mumbai, but was still unsatisfied. “I wrote my first play Shakkar ke Paanch Daane in 2003, and at the same time decided to quit acting because I wasn’t happy with the quality of work being offered to me.”

Kaul soon became among the most celebrated writer-directors in the Mumbai theatre space.

A sense of poetry and pathos runs through all his plays, namely Ilhaam, Bali aur Shambhu and his latest play Colour Blind. His characters often philosophised life, asked many questions and were happy even if they did not always find the answers.

“I don’t care about stories. I was interested in the personal space of my characters. I am interested in what happens to you, how you change, how you live, how you die and that’s what storytelling meant to me. I do not direct stories, I direct the feeling,” he says.

His experiences and relationships he says are his biggest inspiration. “I once told Dubeyji that he writes crappy plays. We drank to that thought and that’s where I found my core too. My friends, the women in my life, my time alone, my uncertainties, my mistakes—they were all part of my stories,” he adds.

The biggest turning point in Kaul’s life came in 2012-13. Theatre could barely pay his bills, and he had just invested all his money in his debut directorial venture Hansa. “I was flat broke. I had too many debts to repay and was almost contemplating leaving the city when I got a call from casting director Mukesh Chhabra’s office for Kai Po Che.”

Despite three leading men in the film, Kaul caught the attention of viewers and critics alike. He confesses that though it was a good experience, he discovered acting with Hansal Mehta’s City Lights. “I was so engrossed with the stage and my writing, that I started to feel alien as an actor. But during City Lights something opened up within me. I started to feel everything my own actors would when I direct them. I felt like I was touching and feeling acting as an art for the first time.”

Today, theatre is still very much part of his life and he enjoys the adulation of younger actors. On one hand, he’s part of a full-blown commercial film like Jai Gangaajal and on the other he has just finished three independent films free of charge. “We finished Albert Pinto Ko Gussa Kyoon Aata Hai, which was crowdfunded to a large extent. I’ve also done Bejoy Nambair’s Dobara, which is a beautiful love story, and Pulkit Singh’s Maroon which is a psychological thriller about a man in a house. I haven’t really made much money with these films, but it’s the kind of work that has brought me great satisfaction as an actor. Acting is a big lie. How you train your mind for that lie to be better than the biggest truth is where your craft is.”

Manav Kaul takes time off these days to travel to the hills. He has written a book of short stories, Theek Tumhare Peeche , which will be released in March. He also writes snippet-like stories on Instagram when he feels inspired. ‘Main woh nahi hoon jo dikhta hoon, main woh hoon jo likhta hoon’ (I am not he who you see, I am he who writes), says his latest Facebook post. We wonder if we should go on with this snippet, perhaps with adrak chai this time.