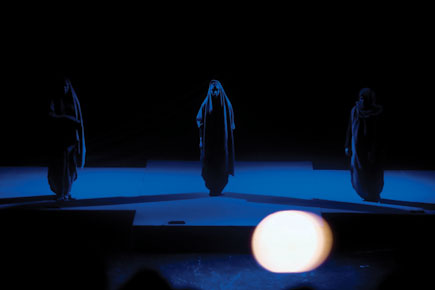 
Musicals, fairly common in traditional Indian theatre, are becoming rare on the contemporary stage. A departure, then, is Stories in a Song, a play directed by Sunil Shanbag on musical forms. Showing at the National Centre for Performing Arts, Mumbai, last week— and shortly to go to Prithvi Theatre—Stories in a Song is a loving medley of India’s traditional forms of music to create a historical narrative of obstacles that musicians faced in their times.

Thus, a courtesan with a ravishing voice routs the hypocritical arbiters of taste and morality, while Buddhist nuns raise an existential chant about shedding worldliness for the joy of enlightenment. In another of the seven episodes that make up the play, Indian women and a British memsahib trade notes on life in a musical form known as Kajri.

While some forms showcased in Stories in a Song, such as Nautanki, continue to be part of the contemporary scene, particularly in the film industry, the play chooses to mount them on stage in their traditional forms. Consequently, they are simultaneously familiar and fresh to the viewer.

According to Shubha Mudgal, the genre-defying vocalist with a Hindustani classical bent, who conceived the play, “It was the idea of engaging with theatre, and using its obvious strengths to recount stories about different aspects of Indian music and music-making that led Aneesh (Aneesh Pradhan, her husband) and me to approach theatre director Sunil Shanbag with the basic idea [for the play].”

For Mudgal, the play realises a long-held dream fuelled by her furious reading habit. Over the years, she says, she has built a personal collection of about 1,200 books, besides a similar sized collection by Aneesh. “There are innumerable accounts, some historical, some literary and some works of fiction, with significant information about music-making and musical styles in India.  Aneesh and I have come across many of these accounts, and as students of music, many of them are so vivid that it is not too difficult to start visualising events as described in these narratives,” says Mudgal.

Two books, in particular— Ye Kothewaliyaan by Amritlal Nagar and Kajri Mirzapur Sarnaam by Dr Arjundas Kesari—came handy while conceptualising Stories in a Song. “Each episode focuses on a specific style of music, so we tried to select classical or archetypal examples of those forms. In the Kajri episode, for example, we selected a simple, traditional Kajri that would also work well with a group of singers.”

Then came what they thought would be the easy part (except it wasn’t): finding actors who could sing as well. The difficulty arose, says Shanbag, because actors are simply “not called upon to sing” anymore, and where required, they usually lip-sync their way through.

After two months of auditions and workshops to match actors with songs and scripts appropriate to their singing styles, the show premiered at the Baajaa Gaajaa Festival in Pune in February 2011. Then came a showing at Prithvi Theatre in June, and a third show at the NCPA.

The show at the NCPA opened with an enactment from Therigatha, a collection of short poems attributed to Buddhist nuns. It features three women, cloaked and mysterious, chanting about the transition from worldliness to asceticism. Therigatha is believed to be the oldest known anthology of women’s writing. One nun chants about the pain of a mother who has lost her child, and another about leaving her past life far behind. Softly, gracefully and draped in darkness, the Therigatha scene plays itself out to make way for a narrator to come to stage and line up the next scene.

We are flown into a courtesan’s kothi. She riffs full-throated on a single phrase, lingers on it, explores its heights, and completely wows a special audience of one. And not a moment too soon—for her hall is soon intruded upon by local citizens who decry that she’s immoral, and must desist from such activities forthwith. The courtesan, who has shown her singing chops, now gets in her share of witty dialogues, and in a flurry of silk, drives her detractors away.

In the next scene , the smell of khadi is conjured, as the narrator tells us how the courtesan had gone to meet Gandhi, who had urged her to use her voice and songs for arousing passions of a more nationalistic nature.

Dealing with wit in colonial times is also a Nautanki skit called Bahadur Ladki—a nostalgically kitschy name. It’s a laugh riot. A girl walking down a street is accosted by a British soldier; the redcoat makes a pass at her, and, after a musical duet, ends up getting intimate with the road instead. The British soldier’s song is more dance hall than opera, and his Hindi lines all through the piece are slathered with a mock British accent.

In fact, Stories in a Song has an English song as well. This is a historical rarity since it’s in the Kajri scene, this being a genre of Hindustani classical singing from Uttar Pradesh and Bihar. Kajri famously deals with a woman’s longing for her lover, who is away on business. She wonders why he doesn’t write to her, and this lament provides the excuse for an Englishwoman and her Indian counterparts to exchange musical notes.