Looking at It This Way 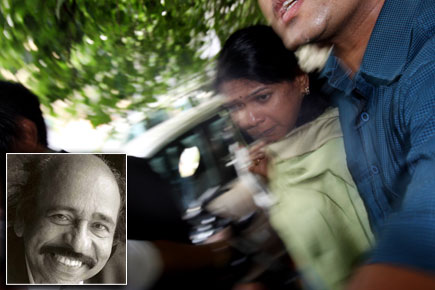 
I am entering this fire / not to prove my truth, / but to cleanse myself / of the stains of your touch

Writing about a beloved acquaintance in deep trouble is sheer agony, especially when one is unsure of the truth and untruth of what has caused her suffering. I have known Kanimozhi for about 18 years now, not Kanimozhi the politician, the Rajya Sabha member and now said to be a willing collaborator in a scam that has shaken the whole nation, but the sensitive poet, a feminist interrogating patriarchal values through her powerful poetry, an activist particularly sympathetic to the women’s cause and, above all, a modest, dignified and intelligent woman.

I had heard of Kanimozhi as a promising poet from my Tamil friends and Tamil-knowing Malayalee friends while I was still in Kerala (now I live in Delhi) . However, I met her for the first time, if my memory serves me right, in November 1997 at the International Poetry Biennale at Ivry-sur-Seine in France, which had brought together poets from across the world with a good representation of Indian poets, India, along with China, being one of the countries in focus that year. The festival had been organised by Des Poètes en Val-de-Marne, a leftist literary organisation headed by Henri Deluy. Besides Kanimozhi, it had other young writers like Kanaka Ha. Ma. (Kannada), Anuradha Mahapatra (Bengali) and Udayan Vajpeyi (Hindi), besides senior poets like Jnanakkoothan and Vijaya Mukhopadhyay. (That was where I also first met Bei Dao, the great Chinese poet, now denied entry to mainland China for having favoured the Tiananmen Square demonstration. Bei, in later years, got much closer to some of us.) I read poetry with Kanimozhi in many locations in and around Paris, including the women’s ward of Paris Central Jail. Even in her worst nightmares she might never have thought she too would be a prisoner one day like those unfortunate women we met there.

All of us liked Kani. She was modest, never showed off, why, she would not even take her father’s name. We also liked her jovial husband, Aravindan, with whom she was then living in Singapore. I particularly remember the ball on the last day of the poetry festival, when we, both of us dance novices, danced together, maybe prompted by the Dutch courage the French wine had momentarily provided us.

In time, I read more of her poetry, published her in English translation in Indian Literature, the Sahitya Akademi journal that I was editing at the time. Later, Attoor Ravivarma, the eminent Malayalam poet, translated some of her poems into Malayalam and included it in his anthology of modern Tamil poetry, Puthunanooru (The New Four Hundred), modelled on the Tamil classic Purananooru. I particularly recall, besides the short poem with which this piece opens, a poem called ‘Shelter’, where she says: ‘Weary with toil throughout the day, I await the dreams on the silver screen I can hire. Following my father’s advice, I joined the school, combed my hair, avoided some friends, clothed myself well, cleaned my teeth, prayed, married and am now waiting for my turn.’ (Open Space carries another translation of the same poem.) In another poem, she, or the speaker in the poem, recalls his/her house that has changed little since his/her birth, with the red marks of paan left by predecessors and the walls with their plaster come loose.

I also met Kani four or five times later, at poets’ meets in Delhi and elsewhere or during my visits to Chennai, and once she came home to see me when she had come to read at the Akademi and I was at home, down with fever. She invited me to release her book of poems, an invitation I had to politely refuse as I was otherwise engaged; but I did respond to her invitation last year to inaugurate the poets’ meet at the Chennai Sangamam, a folk arts-cum-literary meet that she has been organising on a big scale for the past three years or so.

But I was surprised that she had finally taken the plunge she had so carefully refrained from so far, into the soiled DMK politics with all the family feuds that went with it. That was when I began to hear those unfortunate tales about her, about the Kalaignar TV channel that she part-owned and all the rest. I know the law of the land will take its course and even hope against hope that she is proved innocent: so that I may be able to retain that image of the simple, sensitive, imaginative and intelligent girl that I had met in Paris, Delhi and Chennai. Poets have committed suicide in many ways, but should one go this far, I wonder.

To those many Facebook friends who have disowned her poetry after the scandal broke: please remember the innocent and indignant girl who wrote those verses of anguish and anger; that youthful poet lives on in her words even if the person has fallen prey, may be a willing prey, to the dark and lawless power games that every political party seems to be playing in India today.

K Satchidanandan is a noted poet, translator, playwright and critic. He is former Secretary of the Sahitya Akademi