Life on the Dunes

Photographer Gauri Gill’s images of Rajasthan are distinct for their absence of colour. She says that would have just got in her way. 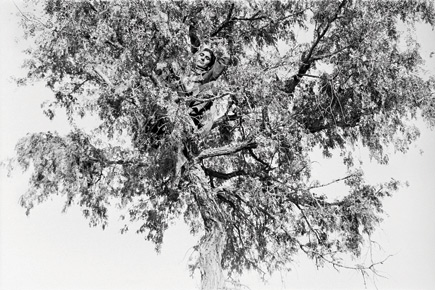 Photographer Gauri Gill’s images of Rajasthan are distinct for their absence of colour.


Ideas that get rejected in newsrooms have a way of taking on a life of their own. Perhaps newsrooms, for all the insensitivity we accuse them of, are unusually prescient. Eleven years ago, restless after seeing a little girl being beaten by her teacher, photographer Gauri Gill came back to Delhi with an idea for a photo essay: what is it like to be a girl in a village school? But the newsmagazine she worked for couldn’t find a ‘peg’ to carry it. Story dropped, Gill took off on a month-long sabbatical to Rajasthan.

Eleven years later, she’s back with an exhibition. In between, there were numerous trips to and fro. (Other exhibitions, too, notably, The Americans, where she chronicles the Subcontinental diaspora in the US.) There were conversations with students, teachers, NGO officials, invitations from nomadic families to travel with them. But somewhere along the way, on her way from ‘school to random school’, Gill’s little project got much, much bigger. What is it that turns an idea into an eleven-year exploration? Perhaps it was a little girl who was terrified of Gill’s jeans and camera. Or perhaps, it was her feisty mother, who insisted on sharing her problems with Gill. Who wrote letters to her, asking her to come back. Gill did, many times. And she’s come back with her own story of the desert and its people. The droughts, the malaria, the moneylenders, the Narega, the death of camels, the camaraderie of poverty. But most of all, it’s the stubborn refusal to surrender to the barren, brutal heart of the desert.

In an evocative note accompanying the photographs, Gill writes, ‘To sleep out on the icy cold sand dunes at night, in the winter, with only some tarpaulin and heavy old quilts means that everyone must huddle in together, along with the dogs, and breathe into the quilt. One isn’t quite sure what is what or who is who, in the huddle.’

Gill’s show, drawn from an astounding 40,000-odd negatives, is in black and white. It’s an unusual road to take in Rajasthan, ever the riot of colour and song and dance. Gill says it helped her keep it real. “I used black and white film because I didn’t want the work to be about colour, and work from Rajasthan is usually all about fantastic colour. I didn’t want it to be exotic in that sense, or within that particular trope. It gets in the way for me.”

The most intriguing section of the show is the ‘Balika Mela’ portraits. The mela was a village fair first organised by an NGO in Lunkaransar town in 2003, attended by close to 1,500 girls from nearby villages. Alongside a ferris wheel, puppet shows and magicians, Gill set up her studio. The results are particularly arresting: girls, sisters, friends, classmates. Girls whose eyes take me right back to my own high school days. Only, we had fountain Cokes and Hallmark cards in our hands, and they, paper hats and peacocks.

Notes From the Desert will show at Nature Morte, New Delhi, from 27 March to 24 April.