Life and Letters in the Mughal Empire 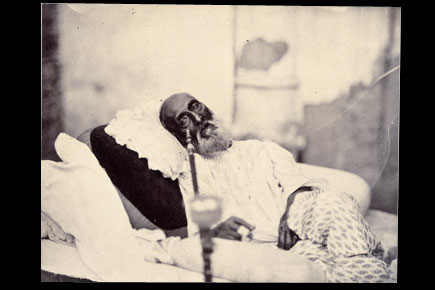 
We had a teacher in school who tried her best to make our dry, crusty history books come alive. Page after page of uninspiring text, interspersed occasionally with black-and-white photographs showing a resolute khadi-clad Gandhi or unflattering line drawings of ancient medieval kings. Somehow, those ICSE and ISC board-approved texts managed to kill the soul of the subject, failing to remind us that history is, ultimately, about people and their innumerable decisions, that it is not so much about dates as about human nature. Our teacher, though, showed us movies and documentaries and took us to the library, where we pored through glossy, high-colour books and played around with interactive ‘teaching resources’ like CDs. If she had walked into the British Library’s current exhibition Mughal India: Art, Culture and Empire, she might have silently wept for joy.

The show, apparently the first of its kind in the country, documents the period between the 16th and 19th centuries through over 200 objects. It traces the rise and fall of the Mughal Empire, showing how at its peak it covered an extraordinarily large mass of land from Kabul in the northwest and most of the South Asian Subcontinent. You enter through an elegant filigreed screen doorway, and even if you’re slightly perturbed by the incongruous décor of the display space—exposed wooden scaffolding that reaches almost up to the ceiling—the works on display are beautiful enough to keep you happily distracted. Through a series of exquisite 16th century paintings, we are first given a glimpse of how the empire was founded, from Babur’s invasion of parts of northern India and the defeat of Ibrahim Shah Lodhi at the Battle of Panipat in 1526 to details of his noble lineage, a descendant of the Mongol emperors Genghis Khan and Timur. A large-scale map, complete with a digital timeline, provides the necessary geographical context.

This sets the tone for the rest of the exhibition—most of the ‘objects’ are writings and paintings from literary and historical texts of the period. The focus is not on illustrations as works of art but as historical markers, as images of certain events at various points in time. In the first section, which serves as an introduction to the Mughal kings, from Babur to Bahadur Shah Zafar, we are offered portraits, biographical tidbits and a selection of items that once belonged to the royal household— Shah Jahan’s jade drinking cup, a gigantic jade tortoise that was found in a royal tank in Allahabad, the (slightly garish) golden crown of Bahadur Shah, which was bought by Queen Victoria. Each portrait has been chosen, albeit rather single dimensionally, to reveal the emperor’s character—hence there’s a gold-hued portrait of Aurangzeb, the most militarist of the Mughals, riding a horse wearing heavy armour and carrying a spear, while that of ‘Rangeela’ Muhammad Shah, apparently infamous for his love of pleasure and sport, shows him coupling with his queen or consort. The portrait of the good king Akbar, however, illustrates an incident on a hunt, when, after a divine spiritual vision, he orders all the captured animals to be released.

The second part of the exhibition focuses on life in the Mughal Empire, beginning with administrative divisions and military and civic governance. High above on a pedestal is a life-size replica of a mid-17th century Mughal cavalryman on an armoured horse—probably the only object on display that holds all the kids in awe. A panel of documents displays correspondence between King William III and Aurangzeb and the journal of British ambassador Thomas Roe, and traces how foreign relations and trade played a large part in securing the wealth of the empire. From land grants carved in copper plates to gold coins engraved with astronomical symbols, we move to palaces and mausoleums, some documented through intricate drawings by unknown ‘Agra draughtsmen’. Amidst the finery of manuscripts drawn from the British Library’s excellent Central and South Asian collections, including Baburnama, Akbarnama and Shahnameh, are humble texts containing song lyrics, instructions on the care and types of horses, pigeon rearing and a guidebook on archery. My favourite was a small recipe book from Shah Jahan’s royal household filled with delicacies and a section on how to cook different types of flat bread. Also displayed is a wine-red tent panel, exquisitely embroidered in golden thread, used as part of a temporary structure set up for an emperor on his travels through his kingdom.

Naturally, the section that shines is the one on Mughal painting, which was born of multiple influences, especially the Safavid school of Persian painting, but rapidly melded with local styles to initiate an entirely new tradition. Largely confined to book illustration and the production of individual miniatures, Mughal painting remained a courtly art, patronised by rulers. On display are several illustrations from the Dastan-e Amir Hamzeh, undertaken during Akbar’s reign, a series of 1,400 illustrations that took over 15 years to create. Alongside, and inextricably linked to painting, is Mughal literature, in which every bound book is a work of art. From texts in the now extinct language of Chagatai, spoken by the early Mughals, to the complete works of the poets Hafiz and Rumi, the selected manuscripts retain their original immediacy and colour. Also highlighted is how finely wrought Persian, Arabic and Urdu calligraphy assumes a form and status of visual art. The section on religion offers rows of exquisitely bound and painted copies of the Quran and images of devotees in a trance. What might have helped bring this to life was if the curator, Dr Malini Roy, had chosen to play qawwalis or Sufi music as background to the show rather than generic instrumental sitar tunes. More lively was the display on science with exhibits of atlases and maps, a beautifully crafted astrolabe, an instrument used since the time of the ancient Greeks to predict the position of the sun, moon and stars, and a wonderful array of pictures of flowers and plants that feature in Mughal art and architectural decoration.

The final section—aptly titled ‘The Last Emperor’—spotlights the decline of the Mughal Empire, its ultimate breakdown in the face of British rule and Bahadur Shah’s forced exile. A large number of photographs, taken mostly by British East India Company officials, document the period. One in particular captures Bahadur Shah reclining on a diwan smoking a hookah and looking into the lens with an empty, almost indifferent gaze. Since Mughal political power had been reduced to the confines of Delhi, the images centre around the spaces of the Red Fort and Jama Masjid. At the end is a striking panoramic painting of Delhi by Mazhar Ali Khan in 1846 that conveys the poignancy of loss—in a decade, after 1857, the Mughal empire would cease to exist. The sweep of the exhibition, covering over three centuries, is exhaustive. And although you might leave feeling like you’ve been immersed in a very long history class, it’s one that succeeds in breathing life and vibrancy into parchment.

Mughal India: Art, Culture and Empire is on at the British Library, London, till 2 April 2013