Reena Saini Kallat uses everyday objects like rubber stamps, electric wires and salt to weave a complex tapestry of the personal and the political 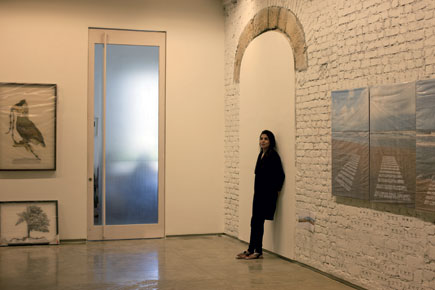 Deo-Yan is a hybrid between the Deodar and the Banyan tree, national trees of Pakistan and India respectively. They both lovingly emerge from the same roots, but on two opposite sides. Zoom out your perspective a bit, and you will see that the hybrid tree is sheathed beneath a pair of human lungs, and small pieces of electric fence are scattered all over the image. Deo-Yan is one of the many imagined species that are part of the multimedia contemporary artist Reena Saini Kallat’s new solo show ‘Hyphenated Lives’ at Chemould Prescott Road in Mumbai.

“‘Hyphenated Lives’ looks at our shared existence. Nature tells you, like nothing else can, how certain species are interdependent on each other. Nature is also in defiance of the divisions that we have created. This particular body of work has come from our long shared historical past that is so deep-rooted,” says Kallat as we sit down for a long chat over evening tea at her studio at Chimbai Road in Bandra West.

There is an inherent simplicity and tranquility about Kallat’s attire and demeanour, almost in contrast to the layers and complexity she weaves in her work. Her serenity extends to her studio as well, a huge rectangular space with white floors. The wall behind us displays the making of some of her older works printed out as photos on paper. Most of the work for ‘Hyphenated Lives’ has been shifted to the gallery, but a few pieces are still here—stacked in one corner, patiently awaiting their impending journey across the city.

‘Hyphenated Lives’ consists of works both brand new and old. It takes forward many of the key themes that have been persistent in her work, especially the theme of conflict. Her use of three main materials, which are also the motifs in her work—rubber stamps, salt and electric wires—pervade this show.

Kallat says that a lot of work in this series comes from a fragile relationship between countries, communities, people, and also with oneself. In these particular works, she makes statements about the conflict between India and Pakistan, Israel and Palestine, Ireland and UK, and USA and Mexico, among others. One of the works also refers to the Jordan River Basin, which is connected to conflicts involving Israel, Syria, Lebanon and Palestine. Many of the hybrid species (created with gouache, charcoal, ink and electric wire on Fabriano paper) have been crafted in ways (including as a stamp or a motif in a coin) to say that they belonged together either in the past or will reunite in the future.

Electric wires form a major character in most of her current work. She started working with wires in 2011 for a work that traced global migration patterns, during a show at Göteborg International Biennial for Contemporary Art. This work’s shelf-life was beautifully extended early this year in Vancouver where Kallat presented it as a public art project titled, ‘Woven Chronicles’. Talking about this medium, she says, “Electric cables are meant to be transmitters of energy and ideas. And here these wires were tracing the historical movements of migrants across the world, and forming these barbed wires and fences. The wires also reflect our inherent contradiction of being in a much more connected world today, yet far more controlled and regulated in our movements beyond borders.”

Another material and motif that is part of ‘Hyphenated Lives’, and of many of her other works, is salt. In Measurement from Evaporating Oceans (2013), a massive hand with a compass tries to estimate the intangible in context of the dates that mark the beginning and end of ‘Wars of Independence’. Saline Notations (2015), a series of photographs, has also made it to this exhibition. They depict a poetic text inscribed with salt, to be eventually washed away by the sea. “People instantly associate salt with purity, permanence, a way to ward off evils in certain cultures. A lot of people also associate it with the idea of resistance that dates back to Mahatma Gandhi’s usage of salt. The idea of resistance is inherent in this medium; resistance towards forgetting. In a sense, it is a way to try to extend life by using a preservative,” she expounds. The disappearance of salt into the sea also reflects its own fragility. Having come from the sea, it returns to it.

In terms of materials, Kallat’s longest relationship has been with rubber stamps, which find a place in this exhibition in the Pause Persist video. These bureaucratic symbols that both confirm and erase our endorsement of being citizens of the state, have found their way to many of her works since. Her rendezvous with rubber stamps began by accident back in 2003. The 2002 Gujarat riots and an upheaval in Mumbai over outsiders from north India were some of its triggers. “These put a lot of beliefs under the scanner, especially for those of us who grew up with a secular outlook. My own personal experiences while moving to the suburbs were unpleasant. Many societies would refuse renting out places to people of religions different from theirs. All these experiences were building up in my head, and even stories about Partition that I had grown up with were subconsciously surfacing.” This led to rubber stamps being used first in Kiosk in 2003 and then many other works such as Synonym, Falling Fables, and culminating in Cobweb/Crossing (a spectacular installation that used hundreds of rubber stamps on the front façade of Bhau Daji Lad Museum in Mumbai).

A strong political stance within the boundaries of art and poetry is evident in almost all of Kallat’s work. She firmly believes that art has a seminal role to play in changing consciousness. She is also an active practitioner of public art, of taking a stand and making the audience participate in the art. “As an artist, I don’t want to create my art only for a niche audience. Of course, there is a certain kind of work that can be shown only in art galleries and museums under conditions that are required to make it effective. However, it is important for me that my work gets seen beyond the art community. To me, presenting in a gallery or museum vis-à-vis a public space is almost like a potted plant in an artificial environment vis-à-vis one that’s in the natural environment. The [latter] means receiving sunshine, rain, weathering all those conditions that come with a public take.”

She also feels that perspectives from people who are not necessarily aware of contemporary art can help an artist derive a different kind of energy which ultimately feeds their work. “It gives you many perspectives that you take for granted within a territory that is very well versed with a certain language. And that pushes you as an artist to devise means of communication that can then form that bridge to the layman,” she says.

A lot of Kallat’s work also takes an inward turn towards the personal. The two videos—Pause Persist and Synapse— that are part of the show take a layered personal route. “Conflict can manifest itself in many ways, like our own conflicted and contradictory thoughts in the battlefield that is the mind. With the Pause Persist video, which is a game of noughts and crosses, you realise that it’s not two people but the same person playing the game! Synapse is a work which shows these people reading text at an eye clinic. There is distortion of these lines they are reading between the changing of the lenses and prodding of the doctor. The video brings forth ideas about reading between the lines, distortion of text, our own fragmented understanding, the element of our inference and interpretations.” This idea of distortion of text is also to be seen in Ruled Paper, where the lines from blank pages of a notebook (created with electric wires on paper) are distorted to give them new meanings.

She was born in Delhi in 1973, but grew up in suburban Chembur in Mumbai. As a child, she constantly drew and was often encouraged by her teachers to take arts more seriously, but she wanted to pursue medicine. She had wanted to change things after she lost her mother when she was eight years old. However, her mother’s influence manifested itself more in art, as she left many handmade objects behind that Kallat developed a secret relationship with. She found herself not only painting but sewing, embroidering and making papier- mâché from a very young age.

Finally, her father had a chat with her one day, telling her if she chose medicine, she would leave behind a lot of her other interests like art, writing and dancing. She decided then to join Sir JJ School of Art. Soon after joining, she knew she had found the space she belonged to. In the five-year degree, Kallat learnt many different things and specialised in painting. She started exhibiting at a very young age, and was launched in 1998 by Chemould and Pundole Art Gallery with a solo show titled ‘Orchard of Home-Grown Secrets’. Since then, she has had exhibitions all over the world, and is considered one of the most notable contemporary artists in India. When Vancouver Biennale was looking for contemporary artists from India who had ‘an eye on its past and a view to the future’ and were ‘examining the social, political, economic and religious implications of becoming a major world economy’ for its 2009-2011 edition, Kallat was one of the six chosen.

She married Jitish Kallat in 1999, whom she met during her JJ days. Of course, being married to him, she is often bombarded with questions like what it’s like to be married to an equally prolific artist. It is a question difficult to resist asking, how much do they participate in each other’s work? She replies, “Both of us are extremely independent-minded. We conceive of things in our heads and form opinions at various different stages. And we may or may not take each other’s opinions. But, of course, we also have the privilege of being each other’s critics, and we can be harsh with each other, because it’s in our best interest. There is mutual understanding and respect, and we are friends and companions first. Ultimately, we want each other to push ourselves and extend our practice beyond the known into other territories.”

She has been very conscious about keeping her practice separate from Jitish, she says, but she doesn’t rule out the possibility of collaboration in the future, especially if they are invited to conceive of an idea together. For now, Kallat has a lot of projects brewing. Soon after ‘Hyphenated Lives’ wraps up, she will be preparing for her solo show at Nature Morte, Delhi, this November. Curation for that show is still going on, but she says that Peter Nagy, curator at Nature Morte, is keen to have a lot of her old work in different mediums for the show. The show would also include one of her earliest works, Walls of the Womb, which was inspired by her mother. “I have always felt that the presence of a person doesn’t end with physical presence. For me, it is always about the intangible that continues to carry the influence, impressions. That’s something I reflect in my early work, about how there is a sense of gain within the sense of loss, and what it is that you receive in the bargain of losing something.”

(‘Hyphenated Lives’ is on view at Chemould Prescott Road, Mumbai, till 10 October 2015)