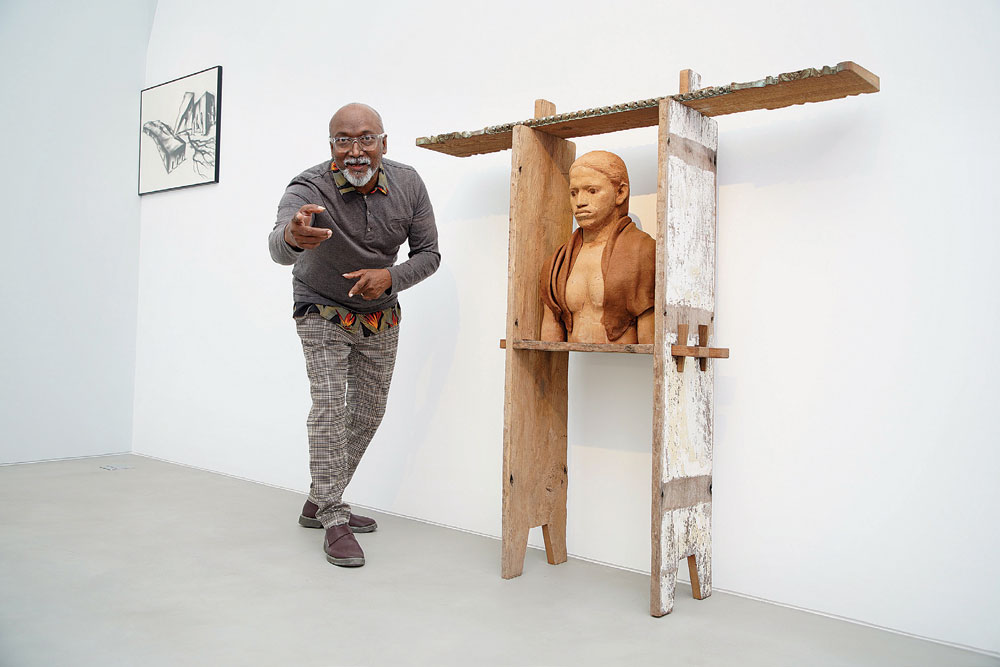 
A MURMUR HAS arisen in the leafy lanes of Koregaon Park in Pune. The murmur has grown into a buzz especially in Lane 8. Koregaon Park has always been known for its sprawling banyan trees, gated mansions, the Osho International Meditation Resort and as a hub for bars and restaurants. Here the city’s trendiest walk alongside those in Osho slippers. In this neighbourhood a new entrant has emerged. It is an art gallery with a restaurant, named Vida Heydari Contemporary.

The gallery is an intimate space with high ceilings and interesting nooks that permit a viewer to enjoy an artwork one-on-one. The space allows for moments of contemplation and does not rush the viewer on. The adjoining 80-seater restaurant (operating at half capacity during pandemic times) is as expansive as the gallery is personal. The restaurant is all chic and classy, the kind of venue where one feels compelled to order a martini and not chai. Apt for a cocktail lounge crowd. The ikat-inspired wall made of plants that borders the restaurant is an aesthetic highpoint of the open-air space.

VHC is founded by Vida Heydari, a curator and gallerist. The Iranian-Canadian gallerist has worked with Indian, Iranian and Chinese contemporary artists for more than a decade and a half. Speaking on a bright mid-December day, Heydari says, “This gallery was created to be a platform for Pune artists as well as artists I work with. There is an abundance of artists and art lovers here. Once I moved here, I felt Pune has given me so much. What better way to give back to it?”

For Heydari, Osho’s teachings were her initial pull to the city. She read a book of his and was so moved by it that she chose to visit the city numerous times. She adds, “It really added to my life. And in the process, I fell in love with Pune. The people are very gentle. The landscape is mesmerising. And that is why I wanted to move here.”


Bose and Heydari have known each other for close to a decade. Heydari reached out to Bose and asked if he would curate the maiden show for the gallery. With sites playing a crucial role to his vision, Bose saw the space, suggested changes and then reached out to artists to create original works for the opening exhibition. When he first visited the space, Bose was immediately attracted to the high ceilings, which are hard to find in smaller venues. Bose and Heydari today joke over the fact that he completely overhauled the space, deleting her office, asking her to break a few of the walls and replace glass panes, in order to systematise the lighting and viewing experience.

“I was looking for artists who made an important statement in their work. i really love artists who work with their hands,” says Bose Krishnamachari, curator

While this entailed a good deal of time and money, Heydari agreed with his plan. She says with a laugh, “I became office-less. But because of his comments, the space has really transformed.” Bose concurs, “I feel this is one of the finest small spaces with great potential because of the aspect of the restaurant and art.”

For Bose, the restaurant is fundamental to the gallery’s vision. As someone who used to have a gallery space in Bombay, which included a restaurant and a bookshop, he knows the importance of a “conversation space”. He says, “This juxtaposition and connecting is very very important.” Artists and viewers of art need a venue where they can immerse themselves not only in viewing but also in conversations. Always aware of Pune’s vibrant arts scene, Heydari is happy with the response, and says that she has met more art lovers in the past few weeks than she knew existed in the city.

ON ENTERING THE gallery, Sumedh Rajendran’s pencil and pen on paper Skin Doubt greets the viewer. Within the frame of a pigeon-like bird, the artist has drawn a grill, the silhouette of a human and a door. The black-and-white-and-blue sketch hints at freedom and restraint, where there is a cage, there is a door out too. The art works on display at Origins of a Perennial Bouquet tell of an inside and outside world: whether it is Tanya Goel’s cement mixed with dye on found debris or Sudarshan Shetty’s sculpture For All That We Gather which consists of objects of home and travel (such as a tiffin dabba, shoes and a potli bag) made from reused teakwood.

I ask Bose how he decided on these five artists. He says, “I was thinking of how in this pandemic time, I didn’t want to make something pessimistic. People talk about being sick, and loneliness. I am tired of things like that. I was also looking for artists who made an important statement in their work. I really love artists who work with their hands. Of course, technology is part of everybody’s practice, but I believe in making with your hands. That process is really important. I started thinking of artists who are working with materials as a serious subject.”

The engagement of the artists with their materials shines through the works. Benitha Perciyal uses a combination of frankincense, myrrh, cinnamon, clove, bark powder, lemongrass, cedar wood, essential oil and reused Burma teakwood in her sculpture The Mysterious Visitor. Her work entails labour-intensive toil of curing and making. Even the pedestal, on which the human figure in The Mysterious Visitor stands, is made of scarred wood. Sumedh Rajendran’s Reverse Land made from teakwood is a hybrid model that questions normal representations. A viewer will come up with her own interpretation of it depending on the length and duration of her gaze. From some angles it might look like a winged horse, from another a peacock and from yet another a ship in sail.

“Pune has a rich art and culture scene. I’ve met so many art collectors who would normally go to Bombay to buy from there. It has been exciting days,” says Vida Heydari, gallerist

Another artist at the show whose work slowly reveals itself to the viewer is Tanya Goel. She is known to make her own pigments from materials such as charcoal, aluminium and concrete. At VHC one can see her work sourced from the demolition site of a building. In Tracing Modernity in Dust, and Light, made from cement mixed with dyes on found debris collected from Central Public Works Departments, she creates a geometric configuration on a boulder-like structure. In Mechanisms 8.5 (fragment 2) she uses graphite, pen, acrylic and silk to create a canvas that reveals her engagement with textures and pigments. It is a dense work of semi-circular lines that speaks of balance and its possible dalliance with chaos. Calling her “a really contemporary artist”, Bose says, “She understands found materials that are historically important. She picks up materials from the demolished building landscapes, which have layers of memories and colours.” Manish Nai’s work Untitled IV is a weblike work on a fly screen made from water colour, primer, varnish and wood. During a walkabout in the gallery, Bose explains Nai’s work, “Textile is an important material, when you talk about the history of Bombay or the history of people who worked in those places.”

In the materiality of the works on display at VHC one can, perhaps, glimpse the future of the gallery itself. As a new space, in a city that is rooting itself into the national art scene, it will be a venue for tangible discoveries. Here artists and those interested in art will find a home under the canopy of trees to seed new ideas and nurture projects to fruition.