Jitish Kallat: The Shadow of the Wind 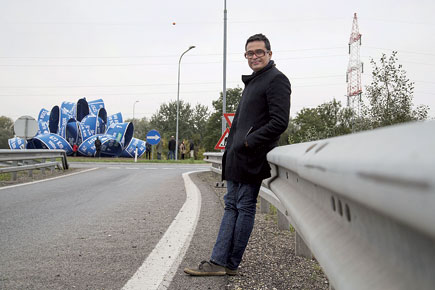 We had been feasting on light. Not that which was streaming in from outside the glass doors and windows but that secretly emerging from ruptures between graphite-hewn lines. We were circled in a moment, there, on the first floor of the beautiful bungalow that Jitish Kallat had adopted as his studio in Mumbai. All around us were large, luminescent paper beings, the consequences of the mid-career artist’s sustained experimentation over the past year. I was there mid-July to witness their ephemeral presence as a collective ensemble. A few days later they were shipped off to Paris where they now hang at Galerie Daniel Templon as part of Kallat’s ongoing solo, ‘The Infinite Episode’, after which they would either improbably return or find themselves dispersed as members of diverse private collections. Staring into their burnt core, I found myself mesmerised by their stunning luminosity.

Though recent, this body of work wasn’t new to me. I’d seen its prototype four months ago at the Galerie Daniel Templon booth at Art Dubai and had been similarly moved. The elements were the same: spontaneously sketched out networks of lines connecting an array of circles. The technique was the same: the application of an adhesive upon a select constellation, followed by its ignition. The effect was the same: the direction of the temporary flames navigated purely by the wind, leaving behind an endoskeleton- like cluster of burnt incandescence. The titles were the same: Wind Study (the hour of the day of the month of the season). What had changed between the first suite he previewed in March and what he had recently produced was the depth and breadth of their formal universe. Kallat had revised the scope and scale of each piece, enlarging it by many inches, thus magnifying the impact of the wind-manufactured light. Both suites were skillful exercises in submission; meditations on the cosmic act of marking time. “The only control that I still hold is the choice of which line I might burn and which one I might not, but thereafter it is the wind that defines both the direction and intensity of the marks left by the line,” Kallat says. “Sometimes, overrun by intense wind, some lines do not have a full life and hence don’t leave any mark or record of their existence as fire. They never arise fully and remain stillborn lines.”

Kallat’s artistic genius was apparent from the beginning of his career, from his debut solo, ‘P.T.O’, held in December 1997 at Gallery Chemould when he was just 23, barely a year after he graduated from JJ School of Art, in Mumbai, his native city. ‘His works on view seemed to acknowledge the impossibility of creating something original and articulated the artist’s dilemma of negotiating a wide field of visual stimuli in order to formulate a relevant response to life as it was lived at the time,’ recounts Peter Nagy, director of New Delhi- based gallery, Nature Morte, that represents Kallat, in an essay titled ‘Jitish Kallat: 21st Century Boy’, published in Universal Recipient to mark his eponymous 2008 solo at Haunch of Venison in Zürich . ‘The fact that most of his works were, at this stage, self-portraits meant that Kallat’s audience would never misinterpret his statements as anything more than the observations of a particularly engaged young man. The personal and the political were successfully merged while humility balanced hubris.’ Kallat’s oeuvre moved from the intensely autobiographical to the more public domain of the city as a living being. Between 2004 and 2005, he showcased a bold new series of works through his solos ‘The Lie of the Land’ and ‘Humiliation Tax’, shown respectively at Walsh Gallery, Chicago, and Gallery Chemould, Mumbai, marking the beginnings of a new direction in his art making. Critic Ranjit Hoskote refers to this juncture as one where Kallat “stepped out of his elaborately conceived theatre of interiority, with its creative oppositions of self/metropolis, mental inside/topographical outside, poetics/artisanship, play/politics, and begun to cultivate for himself a painterly mode of address that is adjusted to a more widely audible frequency… The artist-as-trickster must hold a dialogue with the appearances of his epoch, or else risk the peril of relegation to a specialist niche; but he cannot hold his gifted tongue, cannot too long clench back the beauties and disturbances that he can sing in his own voice. This is his dilemma: the camouflage cannot, over time, become his skin; he must improvise his way out of it.” Hoskote qualifies this modus operandi as “the pictorial declarative”, a credible and honorable resolution to the predicament.

‘The Infinite Episode’, Kallat’s most recent solo, marks a significant departure from his predominant engagement with the vitality of the urban world he inhabits even though his new works share a continuity with the conceptual scaffolding that has always underpinned his artistic concerns; the business of eternity, the question of history, the dialoguing with the self, and the relationship between that self and the universe; concerns that were integral to the curatorial strategy he adopted as artistic director of the highly acclaimed second edition of the Kochi-Muziris Biennale, which were encompassed under the title Whorled Explorations. Perhaps his intense year- long investigation into the poetics of time and space lured him deeper into a meditative mode of being, where, for possibly the first time his process is not as camouflaged as it was before in works like Circa, a 120-part sculpture that was the centerpiece of ‘Fieldnotes: Tomorrow Was Here Yesterday’, his show at the Bhau Daji Lad Museum, Mumbai, mimicking the ubiquitous bamboo structures that are an integral part of the construction of buildings in urban and rural India, punctuated with motifs of animals that appear across the façade of the Victoria Terminus Station, the historic UNESCO-declared world heritage monument. Visitors to the Bhau Daji Lad Museum were tricked by the apparent mundaneness of Circa, only to realise, upon closer inspection, that the entire bamboo edifice was in fact made of resin.

Kallat’s Public Notice series similarly played with different mediums to communicate the urgency of each of the texts that were central to the piece. For the first iteration, made in 2003, Kallat hand-rendered Pandit Jawaharlal Nehru’s historic August 14, 1947 speech with rubber adhesive on five large acrylic mirrors and set each word aflame so that the viewer perceived a distorted reflection of herself against the burnt glass. This was Kallat’s first exercise in cremating either text or line. Four years later he created Public Notice 2, a colossal display of Gandhi’s iconic speech inaugurating the Dandi March, with the text collectively composed of 4,479 pieces of fiberglass bones installed on shelves. The work is part of the collection of the Sydney-based Sherman Contemporary Art Foundation. In 2010, Kallat produced Public Notice 3, his large-scale site-specific LED commissioned by the Art Institute of Chicago linking two distinct yet connected historical events, the First World Parliament of Religions, held in September 1893, where Swami Vivekananda spoke eloquently about the urgent need to end religious fanaticism, and, 108 years later, the terrorist attacks on the World Trade Center and the Pentagon.

On 11 October this year, Kallat unveiled his most ambitious and permanent public sculpture thus far at the Stockerau roundabout in Lower Austria. Titled ‘Here After Here After Here’, the six-meter high, 17-meter spanning loop-like assemblage simultaneously references the mythic symbol of ouroboros, ancient eternal knots, alchemical diagrams and sacred geometry and essentially comprises stretched traffic signage. Though seemingly random, each sign references cities across the world and is placed at the roundabout to gesture the direction and distance from “here” to “there”. Commissioned by the mayors of 10 townships on the suggestion made by an advisory council constituted by leading art experts, the sculpture has been enthusiastically embraced by the Viennese art world cognoscenti. Hildegund Amanshauser, a member of the Advisory Committee calls it a unique and excellent work that “makes a mark in art history”, while Vienna-based cultural theorist and curator, Angelika Fitz refers to it as a three-dimensional sign “in which mystery and play shake hands.”

Like ‘Here After Here After Here’, the works comprising ‘The Infinite Episode’ are fervently poetic. Besides the wind studies, Kallat is showing Sightings, a seven-part lenticular photo piece that appear like microscopic renditions revealing the sub-atomic constitution of the cosmos but are in fact highly magnified reproductions of the skins of different fruits, alongside Forensic Trail of the Grand Banquet, a hypnotic projection of X-rayed food items that, in their skeleton form, resemble cosmic objects floating in outer-space, and The Infinite Episode, a sculptural assemblage of the sleeping forms of 10 animals that are scaled to size, echoing the democracy that the state of slumber can achieve across living beings. These new works are guided by the spontaneity and fullness of lived experience.

When asked to describe where he felt he was at in terms of his artistic practice, Kallat defines his current state as open-ended. “One work can seem like being in the middle of an ocean where the horizon appears equidistant in all directions laying open all possibilities,” he says, “but you never know in which direction the shores of insight might be located. The joy is in following the compass of intuition and finding the image that can best materialise one’s inner inquiries as readable form.”