×
ART: INSIDE THE STUDIO

Jitish Kallat is caught between the mundane and the cosmic 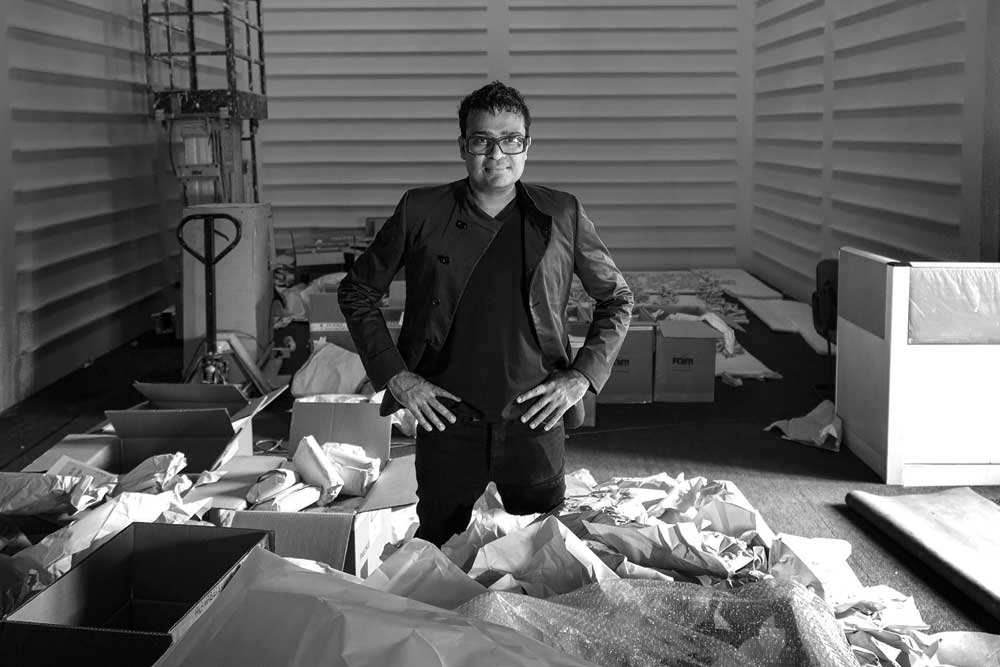 IN RETROSPECT, IT seemed fortuitous that my first intimate conversation with Jitish Kallat should have transpired during the beginning of my now feverish obsession with the subject of Grace. Even more synchronous was the fact that from the vantage point of those hours we spent together on the tenth of July, 2015, we were both due to turn a year older; he in four days, I in six. We were concerned not so much with the discovery of a shared sun sign as much as with our growing consciousness of the onward march of time and where we existed within its span. In the hope of accelerating the ageing process, I had submerged myself in the unorthodox preaching of the French philosopher and Christian mystic, Simone Weil, whom Albert Camus had described as ‘the only great spirit of our times’.

I read aloud to Kallat a few aphorisms I had excerpted in my diary from Weil’s seminal 1947 treatise, Gravity & Grace. ‘Time is an image of eternity, but it is also a substitute for eternity,’ was one such, another being: ‘There is only fault: incapacity to feed upon light, for where capacity to do this has been lost all faults are possible.’ We soon moved from Kallat’s office to the wider room encasing it and seated ourselves nearer to the balcony of the first floor of the spacious, sun-lit bungalow in Bandra he had adopted as his work space that was surrounded by glistening green, moist foliage that had been well fed by intermittent monsoon showers. I happened to make a candid confession about the singular pursuit that had carried me through girlhood and adolescence, predictably seeping into my experience of adulthood—Wisdom. “You know, Rosalyn, Wisdom doesn’t belong to us,” Kallat had intervened. “It temporarily occupies tenancy within us. We must never delude ourselves into believing we are wise.”

My purpose for visiting Kallat’s studio was two-fold. I had been commissioned by his gallerists, Peter Nagy and Aparajita Jain of Nature Morte to assist with several aspects pertaining to the archiving and documentation of his career. I had also been assigned by this magazine to write about Kallat’s then upcoming show, ‘The Infinite Episode’, at Galerie Daniel Templon in Paris. It was a perfectly poised moment as several of Kallat’s latest works slated for display in Paris had yet to leave the studio, and so I was privy to many variations of his Wind Studies, and the titular work, a sculptural installation in dental plaster of a slew of sleeping animals, all scaled such that they appeared to be of the same size, as if the gesture of sleep had rendered them equal. Test prints of the lenticular series, Sightings, lay on the floor, microscopic portraits of the surfaces of multiple fruits that Kallat had purchased at the nearby Pali Naka market. Onto a large board inside his office were pinned working sketches of Here After Here, a six-metre high, 17-metre spanning loop-like permanent public sculpture installed at the Stockerau roundabout in Lower Austria that references the mythic symbol of ouroboros, ancient eternal knots, alchemical diagrams and sacred geometry and encompassing stretched traffic signage referencing cities across the world and the distance to each from ‘here’ to ‘there’. It was unveiled on October 11 that year to immense critical acclaim.

A few months later, when I next visited Kallat’s studio, the same sketches and diagrams had been moved out from his office. The board had been replaced with prints of site plans. Kallat, perhaps with some nudging from me, would borrow the title of this successful work so it could embody the conceptual framework of his mid-career retrospective that was then in the pipeline.

ON THE SIXTH of January 2017, Kallat and I were seated on one the steps right outside the entrance to the old wing of the National Gallery of Modern Art, in Delhi. We had found ourselves in a linguistic predicament. Kallat was convinced of an essential semantic difference between the words ‘transient’ and ‘ephemeral’. I was trying to assure him they could be used interchangeably within the context we were discussing. ‘Transient’ implies the present that is passing, while ‘ephemeral’ suggests the present that is always already passing, or so Kallat seemed to understand. It was past 5 o’clock, and I was desperate to catch a glimpse of the installation of his work at the new wing, so, upon his instruction, I left with the security guard who was to open the section for my private viewing. I returned, elated at how his epic work, Epilogue, memorialising his deceased father’s lifetime through the invocation of 22,889 moons depicted through phased out rotis he would have seen. Kallat was supervising the hanging of Chlorophyll Park. Suitably happy with the alignment, we retreated to a corner to deliberate upon matters pertaining to two books on his practice I was helping edit. “So Rosalyn, I decided to keep ephemeral for now,” Kallat said. I smiled, unable to mask my amusement at the profundity of his sentence construction. “How philosophical of you,” I said, “keeping ephemeral ‘for now’.” His laughter marked his concession.

Wisdom doesn’t belong to us. It temporarily occupies tenancy within us. We must never delude ourselves into believing we are wise

Never before had I felt so intricately responsible for an artist retrospective of this magnitude, primarily because I had been irrevocably involved from its inception. Around this time last year, I had been sent by Jain and Nagy to accompany Kallat during an important visit to the NGMA, when he had to make significant decisions about the scale and scope of the show. By now, I’d lost track of the number of times I’d visited his studio in Mumbai, although each visit remained momentous, given Kallat’s poetic disposition. Where with an artist like Subodh Gupta my primal connection was with food, or where with Bharti Kher it was about our mutual concern for the body politik, or with Mithu Sen it was about the sanctity of mark- making, with Kallat it has always been difficult to pinpoint the basis for our continued association, beyond the enterprise of book-making. When recently, on New Year’s Eve, I called Kallat to speak about pending decisions pertaining to the manuscript of the anthology being published by the NGMA to coincide with the exhibition opening, he sounded startlingly calm. He expressed amazement at how efficiently things were coming together, how enthused the staff seemed to be in terms of facilitating logistics. “You have to understand, Jitish, a lot of it has to do with you,” I said. “You have this way of motivating people to come on board with your plans, you make them feel like they’re part of a collaborative effort.” It was not untrue. Kallat has a unique way of approaching creative decisions. He solicits the opinions of the people around him. He seeks out the advice of people who may be away, all the while asserting, however unconsciously, that his artmaking does not exist in isolation but as part of a communal nexus. His flair for language ensures that his visual vocabulary is always pertinently resolved. Kallat doesn’t leave any question unturned; his practice is diligently steeped in a host of meditative counter-propositions, making it rigorously self-aware. And yet, he keeps himself open to revelations that surface from the lips of others, welcoming them into his narrative with surprising humility while simultaneously dialoging with their complexity.

Thematically, words often form the basis Kallat’s art, while conceptually; he remains belligerently driven by his obsession with the nature of transience. From the very beginning of his career, through his debut solo, P.T.O., where he inscribed his autobiographical self onto his paintings, he played around with the idea of time. A 1996 work, Flower Child Operates The Funeral of a Schedule, created in the month after he completed his graduation at JJ School of Arts, Mumbai, captures layered time encapsulated through routine and ritual, interrupted by death. Kallat, the freshly minted artist, is seen transferring a watch from his wrist into a coffin as ants gather around the about-to- be relinquished artefact. The surrender of the time-keeping instinct, though, was never fully realised, and Kallat’s ongoing preoccupation with marking the hours bears evidence to his intuition, the most recent being his Rain Study series, which I happened to see during a visit in July 2016. A definite continuation of Wind Study, where Kallat temporarily gave up artistic agency, allowing fire to dictate the contours of a network of graphite constellations, each Rain Study, too, marks the hour of the day of the month of the season in which it was made. Except, instead of resembling luminescent maps, the Rain Study series mimics astronomical imagery, the consequence of Kallat allowing paper to be momentarily exposed to rain, then overlaid with a fast-drying paint. The letters BC mark each such ephemeral portrait, connoting the durational measure of the performed action: the artist’s breath cycles.

As a title, Here After Here quite perfectly embodies the infinite realms that constitute Kallat’s artistic practice from 1996 to 2017. The mid-career retrospective that opens shortly marks a very seminal moment not only for him as an artist, but for viewers in India who will, possibly for the first time, encounter the immensity of his artistic gestures, particularly his Public Notice series that are sculptural articulations of historically significant speeches by figures like Gandhi, Swami Vivekanand and Jawaharlal Nehru. Kallat makes the word flesh, then either scars or eviscerates it, thus effecting a bold commentary on the failure of mankind to practise religious tolerance and non-violence.

The title also furthers Kallat’s investigation into the relationship between the mundane and the cosmic, especially since the upcoming exhibition displays works such as Forensic Trail of the Grand Banquet (2009), a video piece containing footage that appears to feature unchartered territories in outer space and its many landmarks—asteroids, clusters of stars and planetary beings—as they float in front of the viewer, evoking the forms of cellular organisms that are in-fact X-rayed images of food. The wall text, written by another collaborator, Nandini Thilak, describes it aptly, ‘Kallat inscribes the fundamental human impulse for sustenance and life into an image that invokes the eternal rhythms of the cosmos.’

I imagine that Kallat’s studio in Bandra is at the moment bare, though not barren. He is soon scheduled to transit to a new space he will share with his wife, Reena—already an occupant— that’s tucked away in the bylanes of Byculla, a site I have yet to visit. By now, his curator, Catherine David, has joined him at the NGMA, and it seems as though the cosmos is strategically aligned to ensure his retrospective is a success. I’m fairly certain the acclaim will be neither transient nor ephemeral but will mark itself indelibly in art historical ink.

Meanwhile, I am eager to witness the twists and turns Kallat’s career will assume after the event of his retrospective. I am convinced his studio will continue to be flooded by light and grace. As Simone Weil says, ‘Grace fills empty spaces, but it can only enter where there is a void to receive it, and it is grace itself which makes this void. The imagination is continually at work filling up all the fissures through which grace might pass.’