Jamming with a Marley

Reggae legend Bob Marley’s son, Rohan, who was in India this week to launch House of Marley audio products, on living and loving like his father 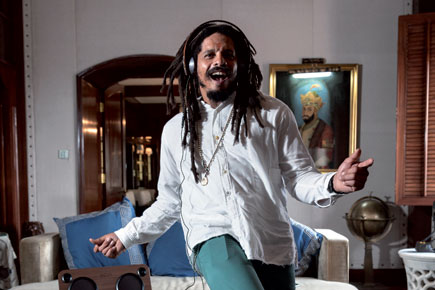 Reggae legend Bob Marley’s son, Rohan, who was in India this week to launch House of Marley audio products, on living and loving like his father


Rohan Marley is not (half) Indian. He gets his name from West Indies cricketer Rohan Kanhai, who his godfather was a fan of. “But when people ask me, ‘Are you Indian?’, I say, ‘Yeah yeah, I am Indian’,” he says, breaking out into ferocious laughter. Rohan, at 40, is a complete goof and he laughs so loud, so often and without any warning that you can’t help but enjoy his impromptu craziness—such as his breaking into a reggae move in the middle of Taj Mahal Palace just because he heard a beat in the background. This bear-it-all attitude behind the dreadlocks also makes you forget that you are with the son of one of the most legendary musicians the world has ever seen.

But Rohan did not pick a career in music like his brothers Stephen, Ziggy, Ky-Mani, Julian or Damian. He became a professional football player instead, playing for the Canadian Football League’s Ottawa Rough Riders. Now, he heads family ventures as chairman of House of Marley, Marley Beverages, Marley Coffee, 1Love.org and Tuff Gong Clothing Company, among other enterprises. “I am keeping my father’s legacy and ambitions alive, of natural and sustainable ideas, of giving back, of sharing and of making the world a better place—all the values of a true Rastafarian. I am just a vehicle for carrying on what my father started. He was the first entrepreneur, he ran a recording studio in the backyard, a press implant for pressing vinyls, a record shop, and he made T-shirts alongside. So I am proud to do this. I don’t just enjoy it, I fulljoy it,” says Rohan.

He was only nine years old when his father passed away at the age of 36 and at the height of his successful reggae career, but Rohan still remembers him as a superhero. In fact, he still sounds awestruck when he talks of him. “I had no understanding of what success meant at that age, I just saw him as someone who was magical. The way he drove cars, the way he walked, the way he carried himself. I just thought he was the greatest human being ever to live. Anything he would do was so special,” he says.

Rohan has the sweetest fleeting memories of his father. Of a concert where he danced alongside him in the final track, of jumping into a bus with all his siblings to go off into the countryside, running on the sand, playing soccer. Most of all, he admired how Bob Marley related to everyone. Good guys, politicians, gangsters, orphans, everyone would come to see his father. “He had an open gate for everyone and he never told them to come back later. That’s what his children have learnt. Ziggy and Stephen do the same thing,” he says.

Rohan particularly remembers one Sunday in Jamaica, when his father summed up what they were to do during their time in the world. “My father would give money to these kids who would wash the windscreen at this stop signal all week. This one Sunday, me and my brother Stephen sent them back saying, ‘This is our day, don’t come here.’ And my father sent us back down, asked us to buy them ice-cream and to sit and watch them eat.” What he said after that struck a chord with Rohan and his siblings: “You are inside the gate, you have food and the same light as me; I am not worried about you, you are with me. I am here for those outside the gate.”

That is why all Marley ventures are big on charity, sustainability, natural and environment-friendly ideas, in sync with Bob’s ideology of a loving world. After launching in over 30 countries, House of Marley made its India debut in November 2012, first in Delhi, and this month in Mumbai, Bangalore, Pune, Chennai and Cochin.

The product range of earphones, headphones, docking stations, watches and bags are all made of reclaimed wood and repurposed leather, their fabrics of recycled waterbottles and organic cotton. A fraction of profits goes to the Marley Foundation, 1love.org and local charities in various countries.

This is Rohan’s second short visit to India since November; the first time he was here, he did not sleep for 92 hours, he was just driving around, visiting temples, taking pictures and “observing and absorbing”. “I look around, and I see people, and I talk to them. And I see that they are happy and joyful despite their circumstances, and that shows you the wealth of consciousness in this country,” Rohan says.

Such moments in India take him back to his childhood in Jamaica, where he lived till he was 12 years old before being sent off to Miami to be disciplined under his grandmother. “Just because I was Bob Marley’s son, I was not born with a golden spoon in my mouth. In Jamaica, you are taught to be a survivor and you grow up fast. My mother taught me to fend for myself. Sometimes, I would have to search for bottles and sell those bottles to get something to eat. If not bottles, I would find some mangoes, or use a slingshot to hunt birds. You just have to learn to survive,” he says.

It is these humbling experiences that partly explain his decision to give up football to run the Marley business full-time. With football, he exuded a raw aggression during matches (he felt he could “annihilate everyone, eat everyone alive”), and then at night he would read the Bible. His inner conflict was wearing him down. “Now I play everyday, but only for recreation. I have taken that focus and aggression from football and channelled it towards better work, and it feels right.”

Rohan picked a career in sports because he loved playing while growing up; he never had the focus or attention span for music, and he jokes that he probably gets this from his mother’s side. “My mother was the worst singer ever,” he quips, “I think I became tone-deaf because of her.”

Dressed in green pants and a white shirt, his hair knotted in dreadlocks, he speaks with an inherent penchant for deep philosophy, and, at a stretch, with the same gusto as his father, whose words have inspired generation after generation to not just singalong but also thinkalong.

Bob, and then later Mama Rita, made sure the kids grew up together and did things together. “We were all close and that was nice. It didn’t matter that we had different mothers,” he says.

He sheepishly admits that he loves Lauryn Hill’s music too. Rohan was in a 10-year-long relationship with the hip-hop singer before they split in 2011, and the former couple have five children together. “I feel sad that I loved her so much and I faltered in expressing it to her somehow. It was my fault that she did not understand how I felt, and it was sad that we did not work out in that relationship sense. I was heartbroken for a long time,” he says.

Rohan was recently engaged to Brazilian model Isabeli Fontana. “But that too did not work out. Now, I am just engaged to myself,” he says with a laugh, “It is tough, but we are not to ask ourselves, ‘Could you be loved?’ but to say, ‘Yes, I am loved’.”

Rohan remembers the day his father passed away. When Stephen and Ziggy got his father back home to Jamaica, he stood in a corner, crying. “Stephen got out of the car, and came up to me, and said, ‘Daddy said not to cry.’”