The actor discusses the effort behind his effortless performances, the Oscars and why he thinks Hollywood is ready for an Asian hero 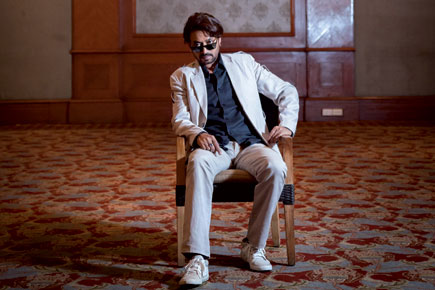 The actor discusses the effort behind his effortless performances, the Oscars and why he thinks Hollywood is ready for an Asian hero


Get this straight—Irrfan Khan is not the serious man his films have made him out to be. In person, he is articulate, a patient listener and enjoys a good laugh. If he is serious about anything at all, it is his craft. Only when he talks of acting does he start to resemble his screen characters, his expression turning progressively grave, his eyes bloodshot and his brows knitted. Little wonder then that Khan inspires awe in other practitioners. Like an ageing writer whose great subject at a later point becomes writing itself, his has become acting. From Salaam Bombay! to Paan Singh Tomar, his has been a classic underdog story, one that now extends to Hollywood. After Slumdog Millionaire, The Namesake, Life of Pi and the HBO series In Treatment, he has become one of the most recognisable Indian faces in the West today. On the eve of the release of his new film, Saheb Biwi Aur Gangster Returns, Khan takes us through the labyrinth of his mind:

Q What is your approach to acting?

A I approach it with the idea that it should give me back something in terms of experience. And it should entertain. Most of us, you know, are trying to look for some kind of pleasure in our lives. I want to be an actor who gives pleasure to people through acting.

Q You have this wry sense of humour and comic timing—where does that come from?

A I would like to believe that I have a sense of humour as a person. So naturally, some of it translates onto the screen. When I go to a set, I respond to a situation like any actor would. Maybe you would like to slot me as a comic or a serious actor, but I don’t want to slot myself. Mind you, an actor can analyse his own work; most of the training of an actor is to analyse. But I think analysing is the part that should come later. First, the instinct shouldn’t be killed. It should be nurtured. (Laughs) Perhaps I will think about all that when I get old and have a lot of free time.

Q On screen, you appear natural and effortless. What kind of effort goes into such effortlessness?

A Certainly, there is preparation according to the story and character. There always is. You cannot apply one formula to every role. You have to evolve into an actor who can react to any situation. When I am playing a part, sometimes it becomes important to not feel important. I let the story override me. That can become a minus point for an actor—if his presence is compromised. But I am not insecure. That’s what I learnt at the National School of Drama, that an actor is only a means to communicate the story. If you become the means to present yourself and subvert the story in the process, then you aren’t doing justice to your role as an actor—actor not just in that particular film, but as an actor generally.

Q Can you give an example of when you had to dilute your presence for the sake of the film?

A Ashoke Ganguli in The Namesake. The story demanded that my presence be diluted to [the extent that] I should become a nonentity. This is a guy who shouldn’t be noticed. He has a kind of presence that doesn’t attract attention. Would you say The Namesake was your toughest role yet?

Toughest was Life of Pi—because it was not realistic acting. It was a presentation of the story in a particular way, in the given circumstances. As an actor, I couldn’t have moved a single alphabet. There was a set framework given to me by Ang Lee, and within that, I had to emote, engage and bring about a performance that could be interpreted in different ways. If you look at the older Pi, you will say he is cooking the story up. Some people may look at him differently and say, ‘No, he must have gone through that experience, after all.’ How does Pi do it? And how does he tell the story? That was a difficult thing to achieve.

Paan Singh Tomar was also challenging. Sometimes, you are fortunate to work with good directors—like Ang Lee, Mira Nair, Tigmanshu (Dhulia). Tigmanshu understands how to use actors. In Saheb Biwi Aur Gangster Returns, he has extracted good performances of everyone.

Q Do you have any personal favourites?

A From my own work? You know, I am a fortunate actor. Some people tell me, ‘Irrfan, you were good in Maqbool’, some rate The Namesake or Paan Singh Tomar as their favourite. For an actor, it is better if people find different films as your best rather than having just one favourite.

Q When do you know a performance is successfully accomplished?

A When you communicate the story successfully and when you entertain the audience. I make sure that when the audience leaves the theatre, something stays with them… not just ‘time-pass’ but something beyond that. Do you see yourself as an entertainer?

Because irrespective of [whether] they were comedies or serious films, they have entertained you. When you came in with Salaam Bombay!, this was still a conventional industry. How did you make place for yourself? (Laughs) All of us have to make place [for ourselves] in this world. It’s a never-ending struggle.

Q Let us put it another way, how did you break the stereotype?

A I didn’t set out to do it consciously. I was only trying to establish myself as a versatile actor. I was fed up with clichéd offers. One day, I was forced to take a stand: ‘No, I am not going to do this anymore. I will make my own path.’ But I realised that that path wasn’t so easy; it was like walking on a thin edge.

In my mind, I was clear that I didn’t want to keep churning out film after film just to keep my life secure. Because I knew that would be quite boring. So for me, the fear of losing my job was not as big as the fear of getting bored with my work. I am always afraid that I will reach a point where I won’t enjoy acting anymore.

Q How did you overcome that fear?

A I kept looking for roles that forced me to evolve. The Namesake, Life of Pi, In Treatment (the HBO series), Paan Singh Tomar—at first, I thought I won’t be able to carry them off. But I took them as challenges. It’s all about confronting the fear of failure. Still, I am proud that I was making difficult choices rather than more secure ones. How much are you defined by your choices?

Everybody in this world is defined by their choice and destiny. You cannot isolate one from the other. We as human beings have a tendency to look at things one-dimensionally. Either this or that—either destiny or choice. We don’t understand that reality is multi-dimensional. There could be many more forces playing a part in your making that you are perhaps not aware of. For example, modern people try to understand God—or any mystery— through concepts. If I have a good concept, I can sell you shit and you will eagerly buy it. But there should be a concept behind it. Films are one such concept, you understand?

Q Yes. What about luck?

A You need luck and choice in equal measure. I will give you an example. One day I got a call saying Mira Nair is casting for The Namesake. Why did it come to me at that time? Was it destiny or choice? The film coming to me was destiny, my choosing it, saying ‘Yes’, was my choice.

Q Mira Nair once said that one of the things she is slightly proud of is discovering you.

A Mira discovered me even before I [graduated from] NSD. She watched my diploma production, and said, ‘This is the boy!’ She offered me the main role in Salaam Bombay! But then—since we were talking about destiny—destiny had its own plans. I didn’t end up doing the main role. To compensate for it, Mira gave me the role of a letter writer… as a gesture. When she offered me The Namesake, she said, ‘Tera karza thha mujh par, main woh aaj chuka rahi hoon’ (I was in your debt, which I am repaying today).

Q Who are your favourite actors?

A Right now, Philip Seymour Hoffman. Earlier, it was (Robert) De Niro, Al Pacino and (Marlon) Brando. In my book, Brando is number one, he will always be. When I saw him in The Men (1950), I thought he wasn’t doing anything exceptional, but why was it that I couldn’t take my eyes off him? Because there was a certain truth in his craft.

But that could be boring as well. See, when I went to NSD, I thought truthfulness was the spine of a good performance. But today, when you see Peter Sellers, you could doubt his truthfulness but you can’t doubt his engagement. My son is a hardcore Peter Sellers fan. Chaplin didn’t behave truthfully. But he engaged you in a way no other actor did. Now, would you call Chaplin a comedian because he made you laugh? That’s what I was telling you earlier. Why indulge in stereotypes? Actors are actors anywhere, whether in India or in Hollywood.

Q Since you mention Hollywood, do you think the West is ready for an Asian hero?

A (Clearly annoyed) Why do you want to say that after Life of Pi? Maybe after Slumdog Millionaire, you could have had doubts about that. An Asian hero in Hollywood is a reality today. The market is ready and so are Western audiences.

Q Did you expect Ang Lee to win an Oscar for Life of Pi?

A I had predicted it. I was sure about best director, cinematography, visual effects and best original score. In fact, I was rooting for Bombay Jayashri too (her song, Pi’s Lullaby from Life of Pi was nominated for best original song), but then she didn’t win, and I thought, ‘It’s just a trophy at the end of the day—for God’s sake.’