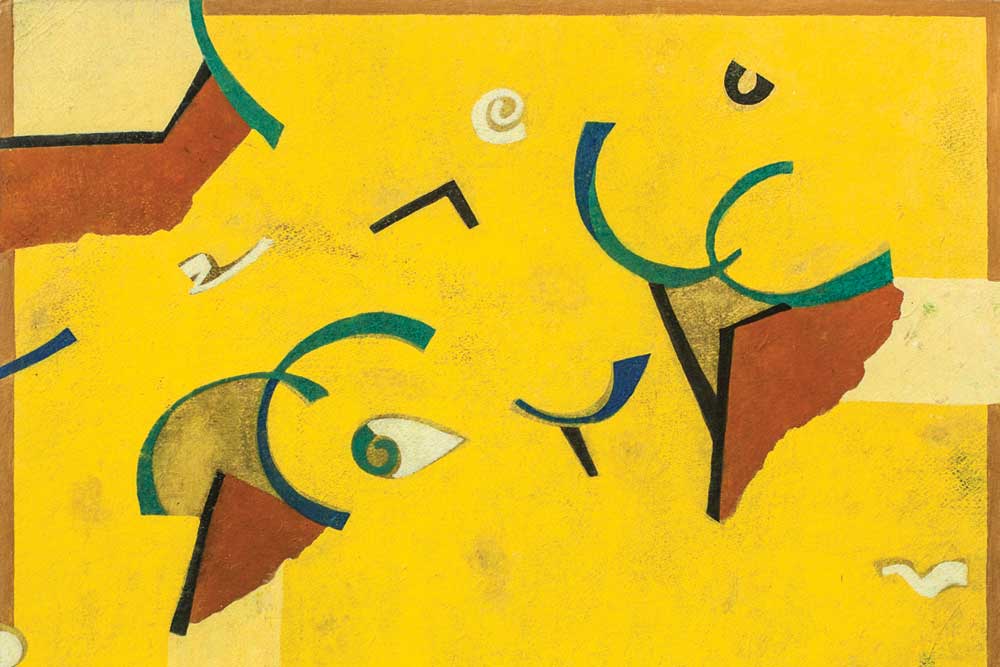 TWO REASSURING ADJECTIVES leap out at you from the literature for the upcoming edition of the India Art Fair (IAF)—‘refreshed’ and ‘expanded’— suggesting an infectious energy, an infusion of which the 11-year-old fair, the country’s largest, desperately needs in order to sustain its relevance in the South Asian art scene, especially given the numerous stimulating events and platforms that have mushroomed in the region, many of which could be seen as the consequence of the fair’s own catalytic role.

‘The 2018 programme will offer unrivalled access to South Asia’s thriving cultural scene, including its galleries and artists, private foundations and arts charities, artists’ collectives, national institutions, cultural events and festivals,’ reads its release, crediting much of this to the fair’s new director, Jagdip Jagpal, a woman with the enthusiasm of a millennial but the wisdom of a veteran, responsible for a series of invested engagements with international art networks. She is credited with playing a significant role in the UK-South Asia project initiated by Maria Balshaw, the Tate’s first woman director, with whom she’d visited the 2017 edition of the IAF. She has also been an advisor to the New Art Exchange, Nottingham, on an important Africa-UK project and has managed international partnerships and programmes at the Tate. She’s also former trustee of The Wallace Collection and Almeida Theatre in London and currently serves as a governor of London School of Economics and is a member of the development board at the Royal College of Art. Jagpal moved to Delhi mid-2017, and soon enough implanted herself within the Capital’s art scene, serially networking, but with the aplomb of someone who needed no validation or introduction. All evidence attests to the fact that visitors to the fair will be in very experienced hands.

When we met in November at a dinner hosted by Khoj in lieu of Asia Assemble, a seminar at Max Mueller Bhavan, she hinted at her decision to altogether drop the Speaker’s Forum, an IAF staple, but without forsaking the panel discussions and conversations that were held under its umbrella. Jagpal’s alleged strategy was to integrate into the main structure of the fair all the constituting aspects that were otherwise separate. The approach hints towards enabling a more holistic experience for the viewer. The redesigned events space will host the IAF’s public programme, which will feature artist talks and industry debates, live performances and digital artworks, including a moving image work by Hetain Patel. One compelling series of artist talks is titled ‘I know what you did last summer’, and is a platform for South Asia’s most established artists to speak to audiences about their recent international exhibitions and projects, thus bridging the gap between their reception in India and abroad.

Another significant feat of the fair is luring back a few major Indian galleries that had opted against exhibiting at more recent editions, including Mumbai’s Chatterjee & Lal, Jhaveri Contemporary, and The Guild, as well as Latitude 28.

Jagpal and her team have also succeeded in enrolling a slew of international galleries that will make their debut at the 2018 edition, the star attraction being the highly acclaimed David Zwirner (which has galleries in London, New York, Hong Kong and London), Berlin-based Blain|Southern, Brazilian Karla Osorio’s gallery, Mo J Gallery from Busan, and Richard Koh Fine Art, located in Singapore and Kuala Lampur.

Outreach seems integral to the 2018 programming, and the IAF team has announced a trial run of a professional learning programme, ‘offering an in- depth view of topics related to the arts industry such as the accessibility of art in India, authentication, intellectual property and the import and export of artworks, featuring international speakers and consultants from some of the world’s leading museums and foundations.’ The fair has also sought partnerships with schools and universities and is offering what it calls an ambitious volunteer programme. A first-time collaboration with Penguin Random House India has also been announced, with the publishing house presenting a creative zone and open-air library for children.

Other highlights include a special showcase by the Kiran Nadar Museum of Art (KNMA), Saket, of the late artist Hema Upadhyay’s early 12-feet-by-8-feet-installation, dimensions based on the size of an actual slum in Dharavi, Mumbai, dating to 2009, titled Dream a Wish, Wish a Dream, from its collection. Audiences walk into an aerial landscape of the slum colony contained within three walls and a ceiling, created using maquettes of tin houses made from aluminium sheets, car scraps, enamel paint, tarpaulins, pieces of metal and other found objects from Dharavi. The BM Anand Foundation will also present a selection of works by Brij Mohan Anand, an anti- establishment modernist painter and illustrator, curated by Alka Pande and designed by Ishan Khosla.

The ‘Platform’ section will bring together art collectives, councils and collections from South Asia, with Britto Arts Trust from Dhaka, Nepal Arts Council, and NCR-based Swaraj Art Archive and Blueprint 12.

For Jagpal, all of these inclusions are part of her intention to allow visitors “to discover the best of the local and regional art scene, from its fascinating history through to its modern-day icons and emerging talent”. This edition is just the beginning for her and her team, and they are hoping it will set the tone for the fair’s future. “Working with the community, we are taking this opportunity to explore and test ideas to shape the long-term future of India Art Fair, to ensure that it reflects the cultural diversity and distinct identity of the region,” she says. “Moving forward, we are also committed to supporting the region’s artists, galleries and institutions not only at the fair but year-round.”

While collateral events in the capital have always formed an important extension of the fair, with many galleries mounting their best shows to coincide with the art fair schedule, this year the range and scale of exhibitions on display is particularly impressive, not just in Delhi but also in Mumbai and Jaipur, reflecting the abundant, exuberant nature of the country’s art scene. Arshiya Lokhandwala’s colossal India Re-Worlded, investigating 70 years of India’s independence through the lens of the country’s leading artists, continues at Gallery Odyssey at the India Bulls building in Lower Parel, as does India and the World, a critically acclaimed exhibition curated by Naman Ahuja, revealing a narrative of India’s historical relationship with the world, told through 200 objects, at the CSMVS, while the Bhau Daji Lad City Museum celebrates 10 years since it was revitalised with a show titled Asymmetrical Objects, curated by Tasneem Zakaria Mehta and Himanshu Kadam, bringing together 10 artists who reference the museum’s past in order to examine the relationship between man and science, space, history and nature.

True to form, Delhi boasts its own share of blockbuster shows, including the superbly well mounted ongoing textile exhibition, A Search in Five Directions, at the Crafts Museum. The National Gallery of Modern Art is hosting an exhibition of the late sculptor Dhanraj Bhagat, titled Journey from the Physical to the Spiritual. Two exhibitions look at Indo-French engagements and histories. At 24 Jor Bagh, curators Rahaab Allana and François Cheval have curated Mutations: Indo-French Image Encounters, the culmination of French and Indian artists either contemplating their respective environments or reacting to the exhibition site itself. To mark its 25th anniversary, Delhi Art Gallery is mounting India’s French Connection, re-telling the history of Indian artists in France, from Amrita Sher-Gil to SH Raza, situating France’s impact on Indian Modernism. Beyond Transnationalism: The Legacies of Post Independent Art from South Asia is another awaited group show opening on February 10 at AIFACS Gallery, curated by Arshiya Lokhandwala for The Raza Foundation as part of its Raza Utsav. Khoj will celebrate its 20th anniversary with a fundraiser exhibition of 20 ground-breaking artists, titled Turn of the Tide, opening on February 11th. The show promises to highlight a new generation of artists making sense of the present.

Also celebrating 20 years is Gallery Threshold, with an ongoing group show, Verdant Memory, which explores how the artists in the show ‘have endeavoured to introduce and use text in their works to articulate and explore different facets of their reality and perception.’

KNMA has opened a major retrospective exploring 50 years of veteran artist Vivan Sundaram’s career. Titled Step Inside and You Are No Longer a Stranger and curated by Roobina Karode and the artist himself, the exhibition will be the most significant one of the artist’s to date, featuring 200 artworks, including a more recent one, dated 2017, titled Meanings of Failed Action: Insurrection , 1946, and will travel to the renowned Haus der Kunst in Munich after it concludes its run in Delhi on June 30th, 2018.

Group and blockbuster shows aside, the capital is also playing host to much anticipated solo shows by a league of established South Asian artists who have been making waves internationally. These include Bangladeshi artist Yasmin Jahan Nupur’s Patterns of a Tactile Score at Exhibit 320, Gauri Gill’s spectacular Acts of Disappearance at Nature Morte (both ongoing); Riyas Komu’s body of new work, Holy Shiver at Vadehra Art Gallery; Anju Dodiya’s new series of imaginative, dream- like paintings on foam, at Bikaner House; Alwar Balasubramaniam’s Liquid Lake Mountain at Talwar Gallery, and Zarina’s Weaving Darkness and Silence at Gallery Espace.

Audiences who feel ‘art’ed out can indulge in an alternative experience that’s somewhere on the cusp between theatre, performance and gaming. On the same weekend as the fair (and subsequently running every weekend in February), Crow, founded by Nayantara Kotian and Prashant Prakash in 2014, will host the immersive play The Emporium at the Edge of Certainty within an abandoned office building in Okhla, provided to them by The Gujral Foundation as part of their Studio Makers Project. The venue will transform into an emporium where goods of all shapes and forms will be on sale but can’t be necessarily purchased with money, and audiences must navigate an experience that is somewhere on the cusp between theatre, performance and gaming.

There’s every chance that by the end of it, ‘exhausted but exhilarated’ will the last words of visiting art enthusiasts.