In the Garden of Senses 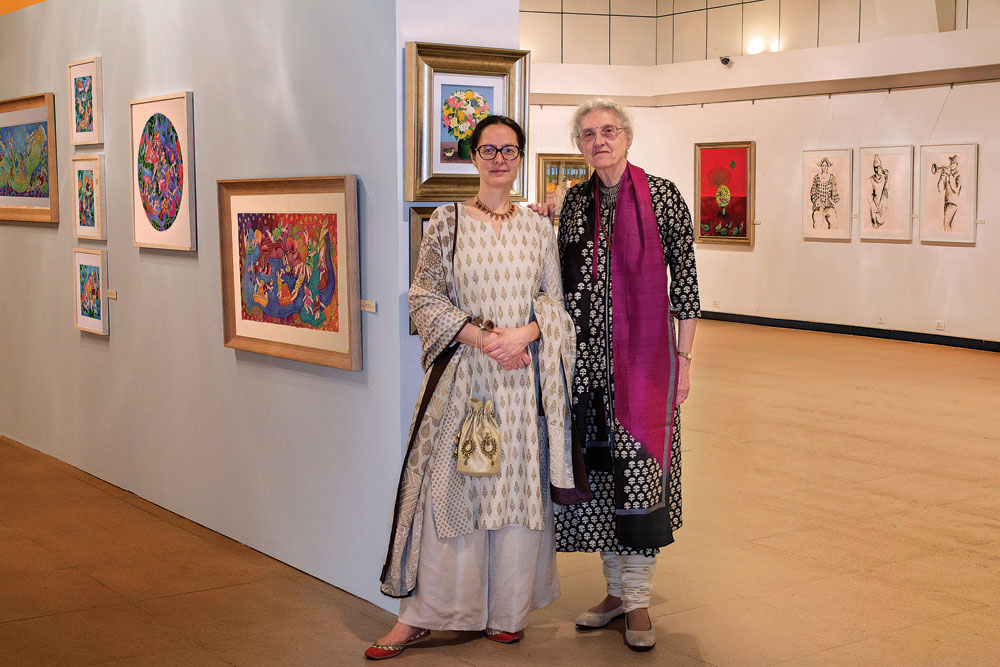 
So well our works match that nobody can tell the difference which one is by me and which one is by my mother. It’s a damn good way to confuse the viewer,” Maya Burman says, laughing heartily into the phone from her countryside home in Anthé, southwestern France. Back in India, her parents—artists Maïté Delteil and Sakti Burman—have been stuck in Delhi since the onset of Covid-19 in April last year. Continents apart, Maïté and Maya have recently opened a show on view at Mumbai’s Art Musings gallery. One look at their candy-coloured art hung together in a happy embrace and you know why the exhibition’s title Fête Champêtre (French for ‘garden party’) couldn’t be more apt. “It’s perfect,” observes mère Maïté Delteil, before adding matter-of-factly, “For professional purposes Maya and I are sticking together a lot.” The mother-daughter duo have exhibited before but this is the first time that Maya is showing her oil paintings made in the last two years. Admitting that her preferred medium has always been watercolour or pencil on paper, she says, “When I decided to try out oil for the first time I moved my studio to my parents’ Paris apartment. My father used to do his marble-effect paintings those days and he’d tempt me to look at his work but that wasn’t my technique. My mother had learned oil painting the classical way. Hon•estly, she’s the one who taught me how to work with oil.”

At first glance their artistic style appears strikingly similar but go a little closer and you will find subtle differences, insists Art Musings’ director Sangeeta Raghavan. “The thing about mother-daughter exhibitions is that they share a com•monality and yet each artist charts her own path and brings her unique vision. So though a viewer expects to see some traces of each other’s works one is equally surprised by the con•trasts,” says Raghavan, whose gallery has represented the Burmans since its inception in 1999. Maya feels her mother’s visual style is, as she says, “more contemplative. I personally love activity and movement and I am more concerned with the perfection of composition, an influence which I think comes from my father.” Nature is a common source of inspiration for both but over the decades Maïté’s art has increasingly veered towards achieving what she calls a “purity in landscape”. A sense of wonder runs through her works on display at Fête Champêtre, blending the real with the magical. Maya, on the other hand, remains enchanted by the human figure and its boundless possibilities. But it is from nature that most of her ideas originate. A native of Paris, Maya relocated to her 17th-century countryside cottage in Anthé last year to escape the strict French lockdown. “My husband (Stephane Alcais) never really liked Paris. He always wanted to live in a vil•lage. So, when the lockdown was announced he said, ‘Grab the dog, rabbits and chickens and let’s just get away.’ It turned out to be the best decision for us, because I have never experienced something like this before. Earlier, my friends used to say, ‘Oh, your paintings are so Edenic. Is it possible that such a paradise exists?’ Now I want to tell them, ‘It does. Eden is right here, in my village in Anthé.’”

For Maya, the pastoral life has been a process of rediscov•ery, both of her roots (her mother Maïté grew up not far from Anthé) and of her inner self. “The more time I spend outside my studio the more I crave to come back and paint. I am energised by my surroundings,” she says, adding, “I never thought I’d have a garden and grow my own vegetables. My husband sometimes complains that I don’t have the hands of an artist anymore. He says, ‘You are looking like a sabziwali!’” Whether she’s depicting a group of women enjoying a leisure afternoon with children gambolling about or trees festooned with foliage and fruits, Maya’s world is one of spontaneous vitality and angelic beauties. She believes Europeans are subconsciously trained to relate to colour as something Eastern. Little wonder, “It’s so Indian” has become a classic refrain among European collectors and patrons when describing her work. But she tells Open, “Except for maybe some Mughal or Rajput miniature influence here and there, I don’t think my subjects and figures borrow at all from the Indian iconography. I am not painting like Jamini Roy with the gods and goddesses having beautiful almond eyes. Baba (Sakti Burman) sometimes does, but his work is also at least partially European in tradition.”


Shuttling between France and India, no matter where the Burmans are they always make it a point to show each other their work and seek advice. “Whenever I send them a picture of a new painting, Baba and Mama are always saying, ‘Why didn’t you do it this way or that way?’ They are very criti•cal — but critical for good,” Maya says. Among the two, Maya is the more animated one though both are equally outspoken. Maya insists that they share an intimate bond like any other mother and daughter and though creativity flows thick and fast between them so do arguments and disagreements. “We have a bad temper,” Maïté warns, while Maya says, “As I have grown older I have realised I am more like her.” Who’s her favourite painter exactly — mom or dad? “I am a big fan of both,” she says, explaining, “I never went to art school. I had to learn painting by watching them and practising on my own.”

Her childhood in Paris was all about art. Maïté Delteil and Sakti Burman would spend most of their time in their studio where, as Maya puts it, “I’d browse images from the books of Leonardo da Vinci or Picasso while I got bored.” She adds, “They were not in a 9-to-5 job. So, they worked all the time and were not obliged to take holidays like someone from an office would do. They were free and busy at the same time, which is strange.” But having artists for parents had other advantages. “Baba and Mama were open-minded in a way that I am sure other parents couldn’t be. When I’d go over to some friend’s home it was strict compared to the environment in our house.” As a child people often told her, “You will become an artist like your parents.” And she didn’t like hearing that. When she grew up she decided to pursue architecture instead, studying at the École Nationale d’Architecture Paris-Villemin and the École Nationale Supéri•eure d’Architecture Paris-Belleville. But she dropped out in the final year, finding architecture “too strict and rule-bound” for her taste. “She had a gift for drawing and colour from an early age. When she got into painting we encouraged her,” Maïté says. As if career confusion wasn’t enough, Maya was a typical recalcitrant teenager who gave her parents “hell”. At 50 today, when Maya — herself a mother of two grown-ups—looks back, she’s not sure what made her such a wild child. “I have to say Baba was a very patient and gentle father because I was not an obedient child at all,” she says, with a laugh. Having an artist dad came with its own set of complications, it seems. “Baba was not practical. People say, ‘He is a maverick artist.’ But sorry — he wouldn’t have been a maverick artist if he didn’t have someone to cook for him, look after him and to attend to all the boring stuff of life while he painted freely. He needed my mother to make all the practical decisions. It’s in•credible that my mother, despite being a housewife, managed to find time to paint. Still, she was less prolific than Baba.” Sakti Burman might be a more popular artist in the family but at home “Mama is the boss,” Maya says. For generations in her family, she adds, “Only women have the final word. All the men came and settled with the women.” Her own husband has no qualms in following this matriarchal rule. “He goes around telling everyone he’s Mr Burman,” she says with a chuckle.

Nature is a common source of inspiration for Maya Burman and Maïté Delteil. But over the decades Maïté’s art has increasingly veered towards achieving what she calls a ‘purity in landscape’

Maïté and Sakti Burman are 88 years old. Specialising in mythologi•cal themes moulded into a fresco-like vibe, the Kolkata-born Sakti along with SH Raza and Akbar Padamsee was a part of the post-Independence Indian artists who were drawn to Paris and its vibrant modern art scene. It’s no coincidence that all three went on to marry Frenchwomen.

Maïté first met Sakti in October 1956 at the École des Beaux-Arts where he was a fellow student. The couple got married on June 23, 1963. Today, the couple’s routine includes painting sessions together at their home in Delhi. It has been 65 years of togetherness. Long overshadowed by her husband’s outsized fame, Maïté is happy that she’s finally free from her duties as a housewife and mother to pursue painting full-time. Lately, Sakti and she have been making copies of Rembrandt in their own style. “For us, it has been a relationship of the mind,” she says. “We realised that we had a passion for painting and a similar way of seeing things and feeling the world. We thought if marriage meant that we could paint till the end of our lives it was the best thing to do then.” She remembers her first India trip in 1964 soon after marriage as “a sudden culture shock.” But over the years, she learnt Bengali and can even belt out a riff of Rabindra Sangeet today. What does she love about India? “Many things,” she says. “The culture, the colours of clothes, the colours of the vegetation, the Indian miniatures.”

Today, the House of Burman boasts an extended family of artists. Well-known artist Jayasri Burman is Sakti’s niece and her husband Paresh Maity is a painter, too, renowned for his brightly-lit Banaras series. What’s more, even the third-generation Burmans are out there chasing success in the crea•tive field, wearing their dual global identity. In 2016, France acknowledged Sakti Burman’s Indo-European cultural bona fides by conferring him the Knight of the Legion of Honour. “It was a big moment for us,” Maïté says, proudly. Before wrap•ping up our chat, I ask if she’s missing Paris. “No,” she replies, firmly. “But Sakti is missing it badly. I am happy to be here in New Delhi. It’s alright.”

(Fête Champêtre is on display at Art Musings gallery, Mumbai, till August 15th, 2021)