In Search of the Original Lovers

23 years after it released, a remake reopens the conversation about Aashiqui. What made a simple romance starring relative unknowns such a huge hit? 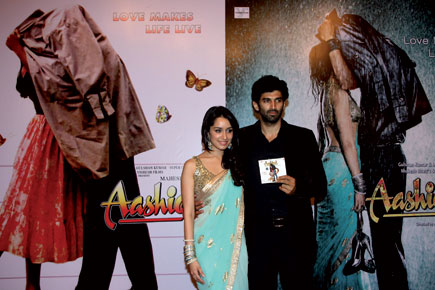 23 years after it released, a remake reopens the conversation about Aashiqui. What made a simple romance starring relative unknowns such a huge hit?


Actor Rahul Roy clearly remembers the day the original Aashiqui released. It was 23 years ago. The date was 23 July 1990. Roy remembers going to producer Mukesh Bhatt’s house, and being driven with him to Mumbai’s Metro cinema. He recalls being nervous because the music, which had released three days before the movie, was a hit. He had not yet met the press; neither had his co-star Anu Aggarwal. Not many knew who he was. At least, that’s what he thought. A day before, he had attended a preview screening at Dimple theatre in Mumbai, where the movie was well-received, but, he says, “I was told by everyone that even though the theatres were booked solid, who knew if the janta would like me. I was not a conventional hero at all—right from my hair to the way I talked.”

Roy’s doubts cleared when Bhatt’s car reached Metro. There was a huge crowd there. They recognised Roy and surrounded him. He had to be escorted to the office of the cinema hall’s manager. “People were banging at the door. I called up [Mahesh] Bhatt saab from the office and said, ‘Thanks for making me a star.’ Not a seat was empty. I thought they would only applaud the songs, but from the first frame till the end, no one moved. The janta had accepted me.”

Now, as Aashiqui 2, starring Aditya Roy Kapoor and Shraddha Kapoor, is playing in cinemas, Roy is gearing up to announce a new movie project. I meet him at his office in Mhada, Andheri West. He asks: “So what’s the report [about the sequel]?” I say I don’t know and ask him the same question. He says: “Aeda ban ke peda mat khao.” (Don’t play the fool.)

He is dressed in a blue T-shirt and jeans and, at 45, is still good-looking. In his new project, he will cast himself along with newcomers. He says he has not seen the remake of Aashiqui. He says, “I don’t think you can recreate the magic.

Sometimes everything comes together to make a movie work—and that’s called magic. You can’t recreate that. Both Anu and I were very raw and that worked very well. Bhatt saab made sure we did each shot with feeling. He knew our stories and hence knew us well. He could sense it when we were cheating. I had to live with the fact that I couldn’t get to that level of acting ever again—it worked against me.” According to Roy, the Bhatt style of directing is what made the original Aashiqui such a treat.

Roy acted in some notable movies after Aashiqui, including Junoon, which has almost a cult following, but he never made the big league. “But people still loved me. How would you explain me winning Bigg Boss in 2006? I am not egoistic but that proved people still want to see me. In Aashiqui, I had the kind of innocence that was raw, which I can’t repeat. It’s gone. All I can do is move on.”

If it was hard to move on from the kind of adulation he had received when Aashiqui was released, Roy doesn’t show it. “Letters in blood and women coming to my [hotel] room was so common then. I used to do shows in front of 40,000 people in the US and then come back to the room and find women in my hotel. Women used to get fever just by meeting me.”

If Roy has remained in the public eye, or has tried to, his co-star, Anu Aggarwal had marched to the beat of a different drummer right from the start. She faded away mysteriously, and returned to public memory briefly only after the rumour of a serious road accident, which too was mysterious. In a few rare recent photographs, she looks scarred and weary, but still glamorous.

“Anu didn’t make it because she lived in the moment. If she felt like doing a movie, she did it. Or else not,” says Roy. “You needed to hold her attention. She lost interest too soon. She never relented to the lure of Bollywood.” Asked about her whereabouts, he says, “I have no clue and no one else does either. No one cares.” Open too could not reach her.

Aggarwal, who was spotted by Mahesh Bhatt, was a dusky beauty, an improbable Hindi film heroine for her time. After Aashiqui, she acted in a few movies including Khalnayika and King Uncle. In 1999, it was rumoured she’d had a near-fatal accident. Soon after, she stopped appearing in public. In an interview to Hindustan Times in 2010, Aggarwal said she had been comatose for 29 days after the accident and her face was partially paralysed. “I liked anonymity,” she said in the same interview, “which really means no ambition, no greed, no dishonesty and no hate.” She also admitted she never really wanted to act, but Mahesh Bhatt had made a strong case for her doing the movie. After the film, she remembered being mobbed everywhere. “There were people outside my doorstep all the time. I walked out to notes saying, “Anu, I love you.” There were always pieces of paper in the corridors. People went crazy—girls, boys, young people, older people, gay people…everybody,” she told HT.

Most people remember Aashiqui for its music. Songs like Dheere Dheere Se, Main Duniya Bhula Doonga, Bas Ek Sanam Chahiye seeped into the psyche of every Bollywood fan. Nadeem-Shravan and singer Kumar Sanu began their successful careers with the film. Veteran film journalist Rauf Ahmed says, “It made the industry realise the audience for music. It opened the market for music. It was the beginning of the T-Series domination as Gulshan Kumar discovered the power of music.” Ahmed feels the actors really didn’t deserve much praise, as they were amateur performers. “Mahesh Bhatt covered up for them. The movie had no scenes where they had to perform. The music completely overshadowed the film.” He says they never made it later because they were expected to perform. “Anu was indifferent as well. She couldn’t go producer to producer looking for roles.”

Mahesh Bhatt, who directed the original and has produced the remake, is basking in the fact that Aashiqui 2 is doing well according to trade reports. “The headline is ‘Love Stories Melt Iron Man’,” he laughs. He says it has outdistanced and outshone Aashiqui. But it’s clear he still harbours a soft corner for the original. “One reason it worked so well was the music. But as BR Chopra said, a film that has great songs doesn’t always work. The songs have to be woven smartly into a good script. It has to have character arcs and should be relevant to the times it is made in. The original Aashiqui was a fresh look at the 90s. It actually had strong women characters.” He doesn’t dwell too much on why the careers of the two leads never took off. “One hit doesn’t make an actor. It takes consistent good work. They just could never get a foothold after Aashiqui.” He does remember Rahul’s call to him from Metro cinema. “He was drunk on joy. It was a hell of an experience for him. And for me, because to see someone take off [like] a meteor makes you feel happy.”

Roy is still trying to feel that high again. After making a few Bhojpuri movies, he is looking forward to starting his new Hindi film venture. As he poses for a photograph, he says: “Aditya [Roy Kapoor, the male lead in Aashiqui 2] and I are actually related. He is a cousin. I am Rahul Roy Kapoor but don’t use the Kapoor.” And he flashes a charming grin.