Imtiaz Ali's new film too is a celebration of desire and longing. The filmmaker in conversation with Divya Unny 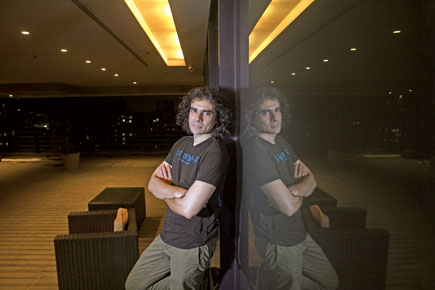 Imtiaz Ali has always loved telling stories. He distinctly remembers a 14-year-old self nervously standing in the wings of the stage, waiting for his entry. He waited with sweaty palms, a loose tummy and a blank mind—one that would always take a few minutes to switch on even after he was on stage. It was the only place Ali would let go of his shy self. Looking fiercely into the eyes of the audience, he has performed tales of passion, separation, inspiration and, above all, love. “In theatre, the feedback is instant and transparent. They show you where you stand,” he says, trying hard not to be distracted by his constantly buzzing phone. A few days later, on a crowded Saturday night, I spot him outside the screening of his new film, half hiding his face in a baseball cap. Between trying to be inconspicuous and greeting those who walk up to him, he passes his credit card to his daughter who rushes to get some munchies. He’s here with his little girl to watch Tamasha , presumably to gauge the audience response to his latest love story.

“This one has a happy ending, much to the relief of lots of people who hated the ending of Rockstar for being so intensely sad,” he says with a wide smile. A week before Tamasha hit screens, we share a cup of coffee in his Andheri office on the 17th floor of a new building. Dressed in a sober cotton shirt and trousers, sitting back on his couch, he politely asks for permission to reply to a few text messages before we start our conversation. It does not take much to break the ice with Ali, who by now we’d think would have run out of ways to tell a love story.

In the valleys of misty mountains, compartments of long-distance trains, roofs of rustic trucks, among blooming sunflower fields, in the gallis of an old dying city, on sun-kissed beaches, in cramped canteens, under a starry sky or on a shaky staircase—Ali finds love stories everywhere. His latest film Tamasha is a heady mix of many of these, and it’s making people talk. “It’s a lot more layered as a love story. It’s a story which tells us that every story is eventually the same. It’s your experience and your perspective that makes it different,” he says.

Unlike most of his other films, which got unanimous responses, Tamasha has divided those who’ve seen it. The film has worked for many and hasn’t for others. Those who adore love stories have been moved by the film’s emotional graph. Yet, some have called it an indulgent film for a filmmaker who roped in two A-list actors for the project. To put it bluntly, Tamasha isn’t a story we haven’t heard or seen before. Boy meets girl, they fall in love and then life happens. This has pretty much been the theme of most of his work. But the film strips down to the barest detail the emotional attitude of anyone who’s madly been in love. “Lovers are like mirrors. They show us who we are. If we are flawed, they show us that. If we are dishonest, that too,” he says. All the stories that are told within the narrative of Tamasha encourage us to follow our instincts. He draws parallels between his film’s Tara and Fazal Shah’s Sohni, even the Ramayana’s Sita. They are all women separated in love who would rather drown in the pain than run away.

The film shows both the mundane and the adventurous nature of life. Through the dilemma of its protagonist who’s torn between chasing his dreams and following the crowd, Tamasha asks you to be the best that you can be. “This is a story I’ve wanted to tell for the longest time. I used to always feel like I’m pretending to be someone else around people. I’d be nice to everyone, but inside I was someone else. It used to bother me a lot, and I realised that we all unconsciously put up a face. I wanted to write a story that asks you to break that mask and be real,” says the filmmaker.

No matter the reviews, Tamasha has been running to packed houses over the weekend, and he says most of the credit should go to the leads. Deepika, self-assured, doesn’t shy away from exposing her vulnerable self, and Ranbir isn’t fearful of appearing flawed, and as characters, both complement each other. “The fact that you have been ex-lovers can set you free. It can make you respect a person, enjoy the working relationship with that person, the bond with that person. It can enable two people to work with each other with greater freedom than ever before. That’s what I discovered through the process of [making] this film,” he says.

Ali admits to being obsessed with love. It’s something he seems to have little control over.

“You look like you’re in love most of the time,” I say.

In response, he turns a little pink and assures me that there’s a reason for it: “I’ve always been fascinated by men and women. Perhaps because I grew up in a household with no sisters, I’ve always felt like women are special. They are not regular and ordinary like us. As a young boy, I was very eager to get on with the first one I liked. Earlier I used to feel very guilty about it. Now I am old enough to admit it. That’s the only difference.”

A closer look at his cinema reveals a rare maturity in dealing with the emotion. It was an innocent and charming love in Socha Na Tha, while a bit more selfless in Jab We Met, and a lot more spiritual in Rockstar. Highway is perhaps the only film where the portrayal of love was far more complex, and away from his comfort zone. “I’m mystified by it. But I am also groping with it much more in real life than I am in my movies. In movies, people seem to find their answers, but in life it is not so easy, because each answer is just a doorway for another question,” says Ali. He himself has not had to face too much heartbreak, but just enough to make him believe in its transformative power. “It’s the only way that takes you anywhere,” as he puts it.

Not all of his stories are inspired by his own life, he insists, but there is a little bit of him in every film. “If anything comes from my life into my films, it would be on a subliminal level, because it really would be too boring. But yes, with my films I do feel completely exposed. These films are a much better reflection of me, than my telling somebody the truth. Like if I’ve been involved with a girl, she will look at me and say, ‘I know where that particular scene is coming from’, but for my mother maybe it’s coming from a memory in my childhood. So it’s different for people who know you differently,” he adds.

As for life experiences, Ali has always had a lot to draw from. A student from Jamshedpur who flunked his class 9, aced his graduation in Delhi University to prove a point, and then came to Mumbai to pursue cinema, he’s had a full palette. He was the quiet kid who would stand in the corner of every familiar lane and observe people. He loved to lie and always wanted to make his father proud. He still remembers the sounds of the cinema hall outside his Jamshedpur home that often put him to sleep. Like the little boy in Cinema Paradiso, he’d made friends with the projectionist and learnt to change reels from him. When he talks about his childhood, it is impossible not to spot a connection with Ved’s childhood in Tamasha. “I was very introverted, secretive and was highly complexed as a kid. I used to feel guilty about everything, but slowly grew out of it. When I was in Hindu College, I started the dramatics society there, and by then I was studying well, so no one could tell that theatre was an escape route for me.”

Ali was part of that gang of young filmmakers who once shared a one-room apartment in Delhi and dreamt of making it big as artists. “There was Anurag Kashyap, Sriram Raghavan, Shivam Nair, Shoojit Sircar and many others who have shared a roof [with me], and by virtue of that, too many secrets. Those were days when all we wanted to do was theatre. That was our root, and if we had a choice, that’s all we would do,” he adds. Many of them have gone on to become noteworthy filmmakers in Bollywood. His work is also a lot more commercial than those of his peers, but he insists that money has little to do with it. “If you think I have more money than Anurag, you’re mistaken. How does he afford his international trips to go write in places like Prague? I write in Bandra or Andheri. My films look more expensive, they have a bigger scale, but he’s the one making the money,” he contends with a smile.

Ali hasn’t been among the most pathbreaking filmmakers over the past decade, but there’s an integrity and a heart to his cinema that is his alone. Even if he repeats himself, the chemistry between his characters always sizzles. “There are things that I don’t like in all my movies. Eventually I start seeing faults and getting uncomfortable with my own films.” That might explain why he’s now looking to break his pattern. He believes one cannot limit oneself to a single format of filmmaking. “You’ve got to constantly keep exploring. I was telling Ranbir and Deepika that maybe in a few years we could do a play together. That is where my roots lie. Even as actors, they are smart enough to know that if they just play the game of being movie stars, their days are limited. Their interest is never going to be satisfied because they are looking for more.”

What about his pet theme? “My perspective towards love has changed. Now I see much more submission in love. The vista has become much more interesting and wide. Perversity to the term is also something that’s included in it. The frame has widened. There are a lot more aspects to it, which has confused me about it.”

As we leave the cinema hall, I notice many people turning back—to look for the director. There’s a buzz in the air. A young college girl says to her friend, “I want to give him a hug. Such a beautiful story he’s told.” Alas, he is nowhere to be found. He has left. Perhaps in search of his next love story.