Inside the curious mind of Imran Khan, who is as comfortable behind the camera as talking about Formula 1 technology and hostile Andaman tribes. 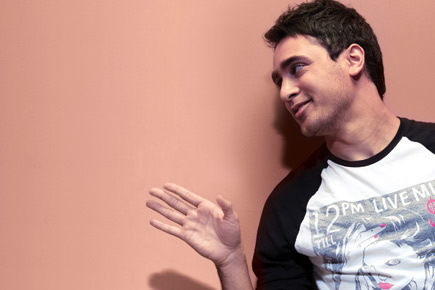 Inside the curious mind of Imran Khan, who is as comfortable behind the camera as talking about Formula 1 technology and hostile Andaman tribes.


Imran Khan remembers being a scrawny 11-year-old when he went to a hardware store, bought a lock and took it all apart, bit by bit, hunched over it in his bedroom. “I examined the interiors, the levers and the cogs,” he says. Today Imran Khan, like Rizwan in My Name Is Khan, can “repair almost anything”. Friends bring in their jammed phones, cameras that have gone on the blink, new laptops that need decoding, or software that appears like an alien language. Imran has always been a geek boy.

The actor says he must have got it from his father. Imran’s parents divorced when he was a toddler, but his dad Anil Pal is an IITian who worked in Silicon Valley, first with Yahoo and is now with DVD giant Netflix. “I think I’ve always been in that space biologically,” says Imran, referring to his ‘geekness’. But since his mother Nuzhat Khan belongs to one of Bollywood’s old film families, Imran inherited those genes too, investing them in a movie career. You glimpse a weird mix of the two when Imran doles out Apple product advice on Twitter to yesteryear star and techie Shammi Kapoor, who did a string of movies like Teesri Manzil with Imran’s late grandfather, producer-director Nasir Husain.

Imran himself made his debut with the blockbuster romance Jaane Tu… Ya Jaane Na in 2008. He followed it up with the duds Kidnap and Luck. The actor is back in the romantic saddle with the Karan Johar production I Hate Luv Storys (releasing 2 July), where he teams up with Sonam Kapoor. Afterward, there is Break Ke Baad with Deepika Padukone. Meanwhile his “edgy heist” film Delhi Belly, produced by his superstar uncle Aamir Khan, is ready but needs the green light from his meticulous Aamir “mamu”.

“I still feel very much like the outsider. The conversation topics among film industry people range from box office figures to gossip—who is doing what, who did how much, and who is doing whom,” says Imran. The actor, on the other hand, is obsessed with trivia. He will shovel facts and pop culture details at you with every encounter. Imran admits he would go bananas if he didn’t have the answer to a question, any question.

This interview happens over the phone because Imran is stuck in Mauritius, shooting Break Ke Baad. He admits the island is paradise-like, but his tone sounds heartily sick. There’s nothing to do after 7 pm as everything shuts down, the hotel cuisine is drab, he’s been battling phone and internet issues, and he’s missing family and friends. What’s more, there are no cattle in Mauritius, so the only milk you get is a powdered, pre-constituted substance that “tastes terrible”. “There are rows and rows of sugarcane fields, but the people here will give you a strange look if you ask for a glass of ganne (sugarcane) ka juice,” he says.

Imran then is happily diverted into talking about things he loves—the old TV show Kung Fu with Kill Bill star David Carradine, and a complicated, technical explanation on what allows Formula 1 cars to climb and drive along the walls of tunnels. He’s just finished googling a dwindling tribe in the North Sentinel Island of the Andaman and Nicobar Islands that resists contact with other people and remains untouched by civilisation. “I read about them in an article that listed how real life resembles the TV series Lost,” says Imran, “The island falls under the Indian Government, yet we don’t know their language, and they attack helicopters that try landing with bows and arrows. The island is home to the last untouched tribe in the world.”

When our conversation turns to his age, Imran refers to the ‘27 club’, the group of musicians like Jim Morrison, Janis Joplin, Jimi Hendrix, Brian Jones and Kurt Cobain, who died at 27. It’s morbid, but Imran is matter-of-fact.

The actor’s curious mind probably stems from his unusual schooling. Imran changed nearly seven schools, including a boarding school in Ooty, and later, high school in America. He was always a geek and insists that if trivia were a subject back then, he would have aced it. “In fact, I possess more knowledge than a lot of my contemporaries. There are people older than me and who did pretty well in school, yet I understand quite a bit of Biology, Physics, Chemistry. How this works, why is this there, the year that different Hindi movies were made, who shot a particular Hollywood movie, what are the secret meanings to the lyrics of American Pie, what are the historical references in Billy Joel’s We Didn’t Start The Fire… I look up everything. I want to imbibe what I can,” he says.

The actor’s sprawling family bungalow in Mumbai’s Pali Hill reflects his eclectic taste. He has a black and white poster of James Dean in the living room, an actor the star is fascinated with, again because he died young. “It’s about the potential he had, something about the promise of an unfulfilled life. If you see East Of Eden, you’ll see all the other actors are doing the classic style of acting, but James Dean is just all torn up in angst,” he says.

Imran’s bedroom is filled with superhero memorabilia, ties and the Converse keds he loves collecting. A prized possession is an original Batman comic issue 1 that he has sealed in plastic and mounted. “I found it for Rs 25 off Linking Road,” he says. He has never checked the comic’s real worth because he never wants to sell it, but an internet search shows that it could fetch close to $100,000 today.

The actor is the unconventional sort, but mixed up in conventional love stories. He’s had an eight-year relationship with girlfriend Avantika Malik, and recently got engaged, admitting that it’s tricky to pinpoint what keeps a relationship going. “You figure these things out yourself. There will be stuff about your partner that will infuriate you. Yet, in the larger picture, it doesn’t matter. I read recently about how the concept of true love, the perfect person, has been created by classic Hollywood rom coms. They build such unrealistic expectations that you’re in shock when you discover your boyfriend isn’t George Clooney. I like the love story in Eternal Sunshine of the Spotless Mind. Real love can be a pain in the ass, but that’s okay,” says Imran.

His fiancé Avantika argues with Imran over how his obsession with trivia makes him forget real people, even some who have come home for dinner. “I find it difficult to recognise people. On the flip side, though, I will know the back story of every Star Wars character created. I’m a Star Wars purist who rejects Episode 1, 2, 3, the prequels. They were just tragic,” says Imran. Ah, Star Wars… unquestionably geekish.