Illness as a Metaphor

An artist’s struggle with mortality 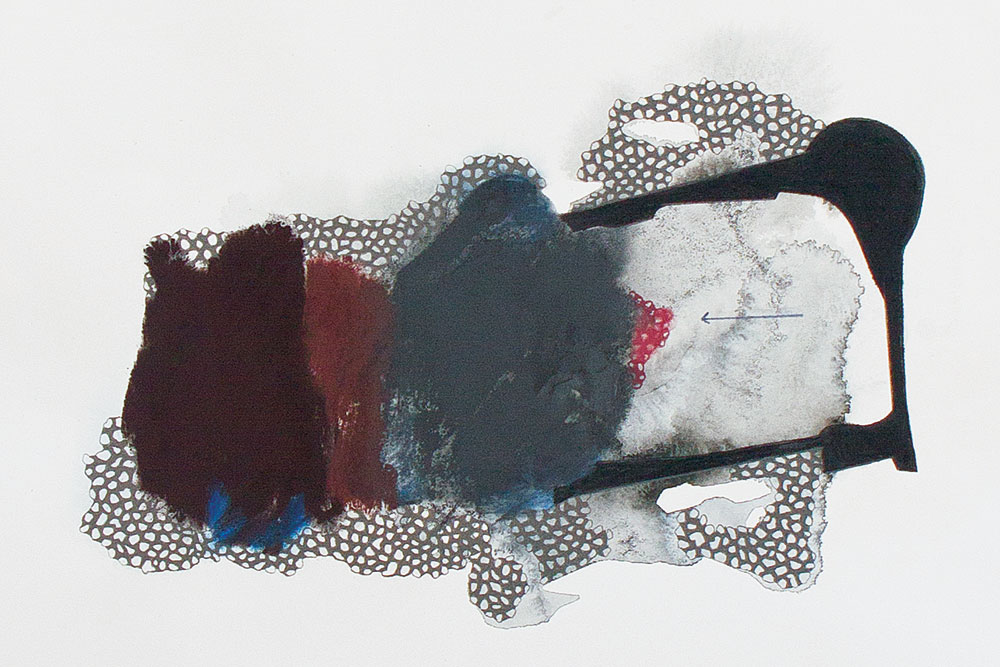 
‘CORPUSCULAR.’ THE word loops in my inner ear. I am standing in front of Heart (Machine), a 60-by-36-inch oil on canvas by Anjum Singh dating to 2016, two years after she received her cancer diagnosis. Back then, she never intended for her bodily affliction to become the focus of her practice. In fact, the morning after her first surgery her close artist friend Sheila Makhijani warned her against allowing the disease into her studio. “Now when you go back, don’t start painting about cancer,” Singh recounts Makhijani’s voice cautioning against potential cliché. “I said, ‘Are you mad? Of course not!’” And yet, when Singh returned to her studio, she found herself unable to wrestle with the city’s infrastructure or urban ecology, issues that otherwise provided fodder. “I used to always work on a very large scale. I realised then that I just wanted to be closed, in-wards, intimate. That’s how I started the paper works.”

In conjunction with the many works on paper, canvases like Heart (Machine) serve as punctuation marks in I am still here, her solo at Talwar Gallery, Delhi. They zero in on a biological compulsion at the level of the cellular. There is the invisible echo of blood pumping, of mitosis and other gestural signs of bodily continuity that attest to the endangered functioning of what Leonard Cohen in his book, Beautiful Losers, termed ordinary eternal machinery (‘like the grinding of stars’). The show is an act of reconfiguring a disembodied entity; returning it to a state of fractured wholeness. It is also the manifestation of a body of evidence testifying to an unexpected state of continued presencing. When Singh ‘came to’ from a state of comatose-like disrepair in the ICU in a hospital in New York sometime this year, she was herself surprised to find she was alive. “I am still here!” she said. The testimonial was suitably adopted as the title of her solo, one of the best shows of her career, she affirms. Even her fiercest critic, her mother, Arpita Singh, agrees. “For the first time in 25 years, she said this show is absolutely fantastic,” says Anjum Singh, 52. “This is my first show where I’ve had no complaints. Otherwise I don’t like the lighting, or I’m not happy with the way the gallery functions, or I’m not happy with a corner of the wall, you know… something or the other. But this has been one time where I’ve been completely happy.”


Her body is by no means one that has the luxury of experiencing remission. She did have a period of respite, but last year, the cancer returned more aggressively. All of 2019 has been spent fighting. Singh had summoned me to the office at the gallery in early September, because she was slated to begin another round of chemotherapy the next day and wasn’t sure if she’d be able to handle being interviewed after that. As we talk, she shows me her battle wounds; scars left from various insertions and removals of catheters. “My hand looks like a drug addict’s,” she tells me. And yet, when she’s painting, she feels there’s never any anger. She tells me so because I ask how it’s possible that the quasi-invasive objects that reappear across media in the show, all bearing intonations of the visual cues of military vocabulary, like tanks or weapons, don’t seem to be waging war. The tableau is revealing instead of negotiations in effect; of a dialogue between parts of the body that have emerged from it but that do not belong and the parts that are organic and central to its functioning. Singh, while denoting their outsider status, still seems to find a way to accommodate them within her compositions. Aside from their life-threatening presence, she seems intent on brokering the possibility of co-existence. There is for sure a schism between the body that is making the artistic gesture and the body that is its subject. One is the caregiver, the other, the attendant patient. Intriguingly, Singh narrates how, when she was very sick this year in New York, at the Memorial Sloan Kettering Cancer Center, she used to literally pat her body at night, telling it to hang in there. “Like how I used to do with my cat,” she says. “Just hang in there for a few more days, we’ll get you better,” she would tell herself.

Despite wrestling with mortality, Singh does not allow space for pathos. The works are substantially moving, but not because they are made by someone who has confronted and continues to confront death. It is what I prefer to call the ‘surgicality’ of the gaze that makes the show unique. Her aesthetic is invested in achieving a form of transcendence premised on corporeal materiality, while the language she uses in her titles appropriates the clinical texture of medicalspeak. There are viscera. There is, through the suggestion of staining, the connotative presence of blood. It comes as no surprise to learn that for Singh, many of these works began with the desire to paint ‘that red’. “It begins with water on the paper,” she tells me. “You take that watercolour pencil and rub it, and that beautiful rich colour, how it kind of diffuses and it begins with that, and of course, then I connect it.” The subsequent red stains evoke fragility. In this show, more than before, Singh herself finds her hand to be less controlling. “I’ve become more playful, more relaxed in the way I paint, in the way I mix. Earlier I was very fussed and straight-lined. I’ve become a lot more fluid in the way I paint and in my choice of material. Also, I’ve made a very conscious decision of sticking to drawing.”

SINGH DISSECTS THE corpuscular. She enters the internal domain of her own body and imagines the drama that is unfolding at the level of the cellular. She performs this surgical act with a painterly hand that seems convinced of its curative capabilities. The show reads like a visual equivalent of some of the linguistic feats Jeanette Winterson performed in her stellar novel, Written on the Body, in which her genderless narrator conjures the cancerous body of their beloved by intimately appropriating the register of anatomical vocabulary. But Winterson’s book has at its heart an adulterous love story. Singh’s approach is like a form of self-administered therapy. The playfulness of line, of stain, of dramatic visceral conflict suggest the draughtsmanship of someone who is seeking authorial agency over the narrative. The ensuing vulnerability, the failure of any correctional effort to reconstitute the body is what, in the end, makes each work powerfully poetic and prophetic. The conscious erasure of any trace of self-pity; the ‘giving in’ without really surrendering; the lack of ostensible desire on the part of either parties (cancerous or organic cells) to irrevocably gain territorial supremacy endows the works a mesmeric quality, drawing the viewer into a primal, private space in which the entity who is host to the diseased body in question seems intent simply on listening, accommodating and evangelising for a synergetic,
symbiotic un-ecology.

(Anjum Singh’s I am still here runs till November 2, at Talwar Gallery, Delhi)