Author Javier Moro on the release of his controversial book, The Red Sari, and why the life of Sonia Gandhi fascinates him 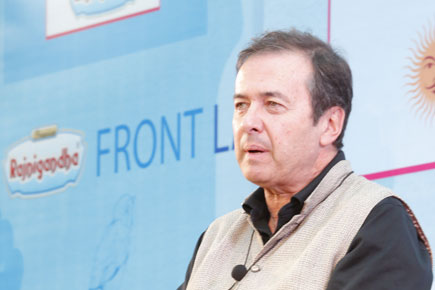 Spanish author Javier Moro could have been a very successful writer of telenovelas. His talent for drama seems almost wasted on books. But why complain? The theatrics were rather helpful in enlivening the second day of the Jaipur Literature festival, which was threatening to become a damp squib with incessant rain and a washed out first day. His session which was aptly titled ‘Romance, Tragedy and Truth Telling’ was moderated by Madhu Trehan (in fine form) and included French author Florence Noivelle, was understandably one of the most well-attended and talked-about sessions of the day.

Before Javier Moro turned his attention to Sonia Gandhi, he was already writing real life fairy tales in which unlikely characters have strange and heroic trysts with destiny. The book that preceded the bombshell of a book, The Red Sari, was called Passion India (note how the titles would make for great soap operas) which chronicled the life of Anita Delgado, the daughter of a café owner from Malaga who ended up as minor Indian royalty. After writing Passion India, he set his sights on another Indian royalty, the Gandhis, and spent the next four years of his life researching their lives. When he finally met Sonia Gandhi at a public event and had just two minutes to make an impression on her, he told her, “Madam, for four years I have been sleeping with you”, to which she replied, “You’re the one with the book… We never read what is written about us.”

The book was banned, his effigies were burnt, but that is all history. For Roli Books, the timing of the release could not be better. It is already topping the charts. “I thought of writing the book as nobody had written about her. A person born and bred in Italy ends up against her will as the most powerful leader of a billion people,” he said to explain his interest in her life. “I went to a major bookstore in Rome and could find nothing on her. There was a hole there. I understood later why there was no book on her,” he said, donning the mantle of the martyr. When he did write The Red Sari, he said, “Her cronies created violence and threat and forced us to withdraw the book.” Through the session, he alternated between two personas, his fanboy like fascination for his subject along with the schoolboy like hurt he felt when his book was not allowed to release.

His research took him to Orbassano, the small town near Turin where she was raised, where he found she was the nicest girl, never rebellious, always docile, tied to her family. Her father did not come to India for the wedding, he was opposed to it. “A man of the mountains, for him, his daughter marrying an Indian was the same as marrying a Martian. He was afraid for her. He wanted her to avoid the risks of marrying someone with high power.”

He spoke of the day Indira Gandhi was assassinated and Rajiv Gandhi knew that he would have to break the pact he’d made with his wife not to enter politics. “She burst into tears on the fifth floor of AIIMS,” said Moro, laying it on thick, which he does through the book, which is written in the first person.

The Red Sari will undoubtedly be a bestseller in India, and some may consider it scurrilous, but Moro defends his work as serious. “It’s an interpretation of mine, but a serious one. I haven’t invented characters out of my head.” As he summed up, “It’s not like I created hot scenes between Sonia Gandhi and the Dalai Lama.”