Anne Enright, the Booker-winning author, is in India this month. “I want to disturb areas of the brain that don’t get a workout that often,” she says. 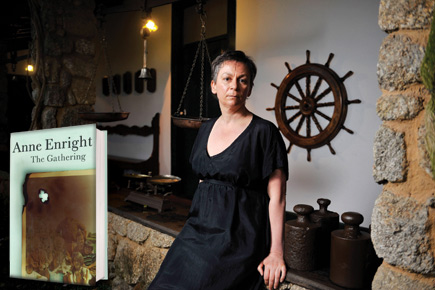 Anne Enright, the Booker-winning author, is in India this month. “I want to disturb areas of the brain that don’t get a workout,” she says.


Man Booker Prize-winning Irish author Anne Enright (The Gathering, 2007) is making her first trip to India this January to speak at the Jaipur Literature Festival. Enright’s widely acclaimed debut collection of short stories, The Portable Virgin (1991), won the Rooney Prize for Irish Literature, and her novel What Are You Like? (2000) was shortlisted for the UK’s prestigious Whitbread Award in the best novel category. The 47-year-old Dublin-born author has written four novels, two short story collections and a book of essays; a fifth novel will be out next year. A writer of sharp intelligence and grit, Enright’s unflinching courage and honesty in tackling emotive issues, such as family dynamics, abuse, sex and motherhood, has won her a wide and admiring readership. In a brief Skype chat from her home in Bray, Ireland, she spoke eloquently about her journey as a writer.

Q Was your family supportive of your writing career?

A One’s parents can behave in opposite ways, very strongly both encouraging and discouraging. I grew up in an ordinary family. It was a very literary household, but my parents were both in the civil service—we have five generations of civil servants down to my nephew—and they wanted me to join the bank. They didn’t even want me to go to university! My mother would send me ads for jobs in the civil service. I suppose they were worried I’d end up in the gutter. My siblings all have proper jobs, but I was the youngest, and in some ways the youngest has an easier time in terms of expectations. I moved into the arts and married a man who was also in the arts. I could both do what I wanted to and annoy my parents.

Q When did you decide that you wanted to write? What would you have done if you hadn’t been a writer?

A I went to a school reunion recently and everyone said, “Well of course, you were always going to write”. I was quite intense, and quite smart, I suppose, and there’s an expectation that people like that will be writers. After university I wanted to be an actress for about two minutes—I went to three auditions and was turned down. I worked in independent filmmaking for six years [producing the series Nighthawks], and it’s possible that I might have continued in television, but it’s a highly collaborative, high-pressure job, and I was just burnt out at the end of it. Writing is a fantastic, simple way to say something, to get something out. And all you need is paper and a pen. It’s cheap!

Q You live in Bray, also home to creative people like James Joyce and David Wheatley, Sinead O’Connor and Bono. Does the place you live in influence your work?

A Sinead is on the seafront, and I never see her, and Bono is a couple of miles away, and I never see him either. But in Ireland everyone knows everyone. Bray is a slightly ramshackle seaside resort and it has a faded charm. The Christmas dinner in Joyce’s Portrait of the Artist as a Young Man is set in a house in Bray. I know the present owners, and I think it’s wonderful that you can go down to the house that Joyce was in. It’s a strongly historical place, and I like that very much. I can just walk down to the sea anytime, and I do that quite a lot. In my current work the Bray sea is a very strong presence. I suppose the sea is important to Irish writers—we’re surrounded by it.

Q You are part of one of the world’s greatest literary traditions. What are your thoughts on the current state of literature in Ireland?

A There was a boom in Irish writing in the 1980s. It was a moment of confidence in the culture, and I think it had to do with Thatcher’s economic boom, because most Irish writers were published in London. I very much enjoyed being part of this generation of writers [Colm Toibin, Roddy Doyle, Dermot Bolger], I know them all and there’s a strong collegiate feeling. It takes a lot of time to get critical praise at home, though I think that if writers aren’t getting into trouble at home, they aren’t doing their job. But it was a big deal to go abroad, and be feted. I found myself reading at the Pompidou Centre in Paris and I thought, this is fantastic, I have arrived! They’d stuck a fake Irish pub against the glass wall and had us read there; some of the poets were quite upset, but I rather enjoyed it. I’m quite anti-posh, and that’s a sort of signature of the generation of writers I’m talking about. There are writers who try for importance, and I think that’s a post-colonial hangover.

Q Do you think that there’s a particularly Irish quality to your writing?

A In my head I’m inescapably Irish. I think it’s great fun, a great resource. It’s wonderful to have a tradition to play with, though it’s a largely male tradition, so as a woman I have a certain distance from it. Ireland in the 1970s was quite poor; a bus conductor lived below the poverty line. There was free education, but no money. When we went abroad we’d be amazed at the things people had, and their relationship to those things. We didn’t know that we were looked down on for being poor; there’s a shock in realising how you’re regarded. But to grow up in a country that’s changing as fast as Ireland was incredibly energising, and culturally rich. The big arguments in the 1980s were divorce, abortion and contraception. Growing up, I had a lot of arguments with my parents. I was not going to get married and have children, I was going to do things on my own terms. Of course that’s exactly what I did—get married and have children. But we were teenagers for a long time, because we needed time to win those arguments.

Q What were your strongest literary influences?

A It’s hard to describe influence. I read everything, but I love the American, modernist sort of short story. I felt very liberated by the subjective ‘I’ in American fiction, a sort of noisy, egoistic ‘I’. Most of my work is in the first person. I’m not a fan of George Eliot or Jane Austen. I love Flannery O’Connor, Donald Barthelme, John Cheever, those troubled Americans who wrote non-realism. Jayne Anne Phillips was a huge influence. I can see the influence of her book Black Tickets in the books of other writers as well.

Q Did your creative writing training at the University of East Anglia help or hinder your instinctive writing voice?

A I got no work done and I had a very lonely time. I was more unsure of myself when I left than when I arrived, but it was good for a sense of community and purpose. Creative writing courses started around the same time as writers got word processors and so manuscripts look more polished than they are; it’s not ‘He wrote a great story’ but ‘He has an Amstrad’. My generation of writers were less savvy, more romantic.

Q What is your typical day like—when do you write, what do you do when you aren’t writing?

A I don’t really do anything else; I gave up my day job in 1993. It’s unusual for a writer to break through when the children are small. This last decade has been about wiping and typing. I don’t usually get around to writing properly until the afternoon, and then I have about twenty minutes before I have to pick the kids up from school. Then I write in the evenings when they’re in bed. Last night I was working until 2 am. Sometimes I wonder why I’m working so hard! But I don’t spend any time tidying the house or anything like that.

Q You’ve written that you ‘just won’t shape up and become a proper person who believes in nothing at all’. What place does Catholicism have in your life and in your writing?

A At 16, I had a crisis of faith, a sort of last splurge before I lost my religion. But I really got it before I threw it away. Central to Catholicism is the ritual of transubstantiation, where wine and bread actually becomes blood and flesh. I think Catholic writers live with this metaphorical possibility, because every Sunday a miracle happens, partly with language. They have a slightly different relationship to metaphor and reality. Some become tenacious realists. That’s in the fabric of the writing, because language has spiritual possibilities. I think they work in the same areas of the brain.

Q Your writing has a blood-and-guts approach to family dynamics, sex and motherhood. Your books are repeatedly called ‘bleak’—a reporter from The Guardian said that his sense of The Gathering was that ‘I would rather read Schopenhauer while rolling in broken glass.’ Does that make you roll your eyes?

A It makes me roll my eyes, and curl my lip, and sigh. There was a time when, frankly, writers didn’t give so many interviews. Nobody asked Beckett why he was so bleak. He was free to just quietly go ahead and be bleak. Perhaps I have a tragic muse? Perhaps the muse is always tragic. People may be looking for consolation, something that makes sense, the comfort of a rehearsed journey. I don’t give those consolations and comforts. I want to disturb areas of the brain that don’t get a workout that often. I apologise completely for having people die in my books. I’m lying. Everyone lives forever.

Q Do you have a favourite amongst your works? If so, which one and why?

A I’m always unhappy about my work, there’s a constant creative shortfall. But I’m quite happy about my essays about having children [Making Babies: Stumbling Into Motherhood]. The pieces were like snapshots of the experience, so I like it the way one likes an old photograph album.

Q How did the Man Booker change your life?

A It was quite enjoyable not being known. After the Man Booker, I was on the road for a year. I spent a long time trying to ignore the surface changes, because I wanted to see how the silences had changed.

Q You write both short stories and novels. Is one form closer to your heart than the other?

A I have no short stories in my head at the moment. My relationship to them has changed. Short stories are pure pleasure, they just sit there on your desk making little singing noises. Novels are a real commitment. You can’t walk away. But I feel safer in a novel, somehow. It’s more defensible.

Q What are you working on now?

A I’m editing an anthology of short stories for Granta, but I’m also working on a novel set in February 2009 at the end of the boom. It’s about the boom, about fantasy and deception and adultery, though it’s not just about adultery. I don’t want to say much more about it. I have a working title, but I’m not going to tell you! It should be out in spring 2011.