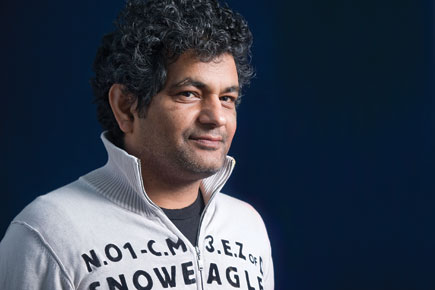 Mohammed Hanif on being drawn to the morbid, his early love for reproductive health magazines, and his fantasy writing place


In 2008, Mohammed Hanif blazed onto the literary scene with his exuberant, anarchic first novel, A Case of Exploding Mangoes, much like the mysterious plane crash in which Pakistan’s General Zia ul-Haq was killed in 1988, and which served as the novel’s peg. Our Lady of Alice Bhatti, the story of a nurse in a psychiatric ward in a Karachi hospital, is the follow up to his award-winning debut. A novel somewhat tenebrous in tone, its laughs feel sharp and foreboding, like spasms in the chest. One Pakistani critic appears to have felt the pain acutely, calling parts of it ‘grotesque’. Hanif, however, says he’s “pleased” with the charge, and talks of writing influences, the misery of living amid “good stories”, and about wanting to write the script of Pirates of the Caribbean 12.

Q What was the earliest clue you had that you wanted to write?

Q Is journalism the profession most suited to writing? What are the pitfalls?

A Journalism makes you sloppy and self-important; you are always in a hurry, you don’t get time for self-reflection. But if you are lucky, you might get to meet some interesting people and learn how to write a paragraph.

Q Which authors did you enjoy reading at a younger age?

Q Which authors do you enjoy reading now?

Q Has any writer made a stirring impression on your work?

Q Have you any writing rituals? A favourite brand of book or pen or antiquated typewriter? A particular displacement activity?

A I wish. I flit around, from desk to sofa to bed. I find it hard to sit still. Maybe that’s why I become more productive while travelling. Airports and long train journeys have always helped.

Q Do you listen to music when you write? If so, what kind? Or do you need complete silence?

Q You recently moved to Karachi from London. How does writing in Pakistan feel compared to writing in London?

A There are no pubs in Karachi and Pakistani trains are not very reliable, so the process is even more solitary than it was in London.

Q Is writing about where you’re from from afar liberating, as the enormous diasporic oeuvre seems to suggest?

A I didn’t really feel liberated, maybe because my day job involved covering Pakistan and I travelled back and forth constantly. It might have been true 10 years ago, but now every Asian household in London has a desi news channel on and everybody is on Skype cooking together.

Q Books, and the lists they are part of, appear to be informed by the hotness of ethnicities or geography; some, pandering to expectations, and others, trying to thwart them. How do you resist a label, or a feeling of responsibility as the voice of a region?

A Are you suggesting that Pakistanis are hot? Trust me, I live here, and generally, they are miserable. You could say that misery can be hot, but surely not for long. Once a famous Norwegian writer told me how lucky I was to be a Pakistani because we have so many stories and he had none. When this tragedy happened in Norway, I had to suppress a very mean urge to ask him: happy now? Got a story?

Q Where do you conjure your characters from?

A You borrow from your own life and try to transform them into citizens of this fictional world you have created. You might have seen a glimpse of a body-builder, but you don’t really have to know him to write about him. I think you also borrow as much, if not more, from TV, movies, books and overheard conversations.

Q There are times when the plot of Alice Bhatti seems to have been drawn from an especially morbid collection of news clippings. Do you have such a stash somewhere? Or do you just have an (inner) eye for darkly funny detail?

A There must be a stash of such things in my mind because I am not really much of a news-clippings type of person. I am drawn to the morbid, though. A Pakistani reviewer called parts of Alice Bhatti ‘grotesque’. I was pleased.

Q Are you a ‘method researcher’? Did you take research trips anywhere for this one, say, a psychiatric ward or submarine?

A My research is quite random and ultimately useless. I bought a Nurses’ Dictionary, for example, but I don’t think there is a single term I have used. I went to some Sunday services, but ended up buying some trinkets. I listened to Vatican radio on the internet a couple of times. And we have all seen submarines and charya wards in the movies, so there was no need to visit.

Q How important is the role of an editor in your (re)writing process?

A Dan Franklin edited both my books. He is superb editor and he has a very light touch. But before I send him my manuscript, some of my close friends, including my wife, read it and tell me what they think. My agent, Clare Alexander, will usually give only one or two suggestions, but she is always right. Former Random House India editor Chiki (Sarkar) also gives quite ruthless but useful advice.

Q Are you working on something now?

A Yes. But I don’t really know what it is.

A I wish there were brothels like that; I think those only existed in his imagination. A long-haul train with a drinks trolley and dining car is as close as I get to an ideal writing place.

Q The writing profession is more social today than it ever was before. What do you think of the cycle of promotion? Being scrutinised, psychoanalysed, objectified? Or does it throw you in the way of stimulating conversations, works and personalities?

A I was quite freaked out by this in the beginning because as an obsessive reader I had never wanted to meet the writers I liked. And I had never been to a literary festival ever. Initially, I thought these are a literary version of a journalist’s junket, just a bit more pretentious. Now I feel more like a travelling salesman; you wake up in a strange place and try to sell your wares, and mostly you end up hanging with other salespeople. But occasionally, you’ll get into a conversation that seems stimulating, but in the morning, you wake wondering who that person was you kept calling brother all night.

Q Do reviews affect you? Or the furious online cloud that follows, which can turn a writer into a meme and a body of work into an incendiary debate?

A good review can lighten your mood for about 10 minutes, but I am always tempted to believe the bad ones. That writer turning into a meme sounds like rough justice, but if writers use the internet to sell their books, surely readers have a right to take them apart or build shrines for them.

Q You’re already a journalist, columnist and novelist. Any other forms you’d like to try?

A I have been trying to write a song for a long time now. I want to write a big fat thriller. And a movie script. Pirates of the Caribbean 12?

Q Do you find writing easy? Or a form of self-inflicted torture?

A I don’t find it easy. I find it quite messy, an almost permanent state of not knowing what the hell you are trying to do. But it’s quite addictive, like one of those fancy drugs that are very difficult to score, very expensive, but even more difficult to quit.

(The original version of this article incorrectly stated Gabriel Garcia Marquez who quoted that the most ideal place to write would be a brothel. It was William Faulkner who said so. The error is regretted.)