A Magical Mystery Tour of Rome

The many myths of the historical Italian capital 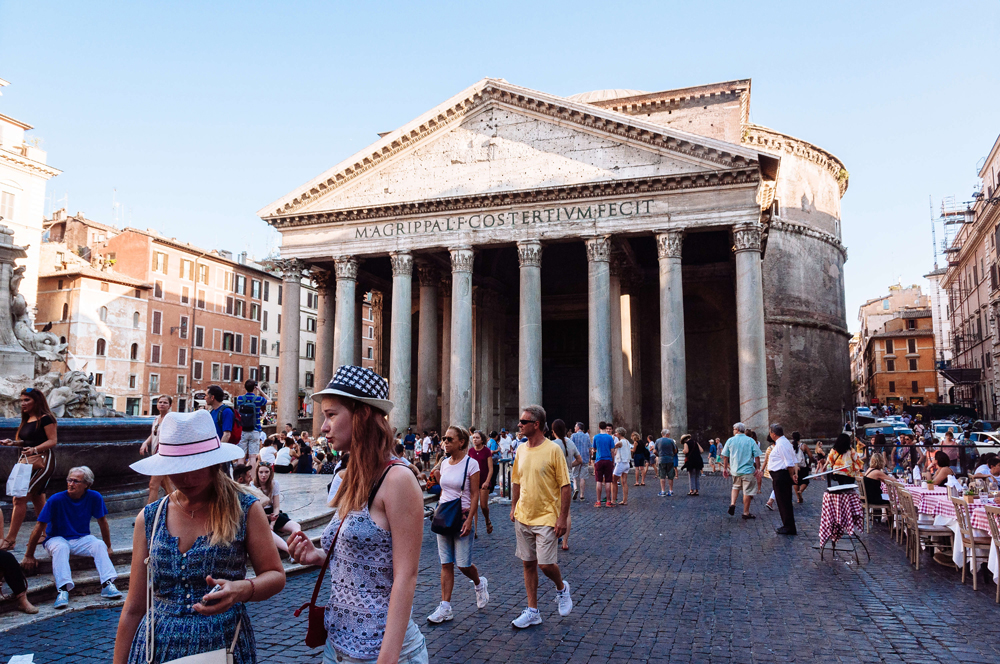 
The mention of Rome typically evokes images of Julius Caesar, Sistine Chapel, Saint Peter or even Audrey Hepburn riding a scooter in Roman Holiday. Some others will remember Anita Ekberg bathing in the Trevi Fountain in La dolce Vita while a few others will go scouting for the traces of Cicero and his pals on the Fori Imperiali stones or for memories of the Borgias. But few—very few—are familiar with the legends and esoteric traditions woven into each stone and path of the city.

The magic starts with the name itself. Any Italian will tell you that, if you read ‘Roma’ from right to left it reads ‘Amor’—which stands for love in Latin. Is it a nice coincidence confirming the ‘romantic’ facet of the city? Not really. Legend has it that Rome was founded by two twin brothers, Romulus and Remus, sons of a human princess and the God of war, Mars. The two, abandoned by their mother and raised by a she-wolf, decided to build a city. Soon a fight started between the duo and Romulus killed Remus when the construction was in progress.

Yes, it is a city born from love and blood. Since the beginning, therefore, it had that dual soul. A city that appears simultaneously luminous and dark and contradictory and disconcerting. But, above all, mysterious. Forever divided between religion and secularism, tragedy and humour, working class and aristocrats. Even the aristocracy could be divided between black and white, where the ‘black’ was the Pope’s aristocracy while the ‘white’ was the regular one. The city, according to esotericists, was founded according to the Etruscan tradition, dedicated to the worship of all its gods and built over a point of fundamental intersection of different telluric currents, perhaps quite symbolic of its cosmopolitan character and its will to conquer the world. Let’s not forget that for Romans, Rome was ‘Caput Mundi’, the capital of the world.

Until the end of the Republican era, the spiritual life of Rome was dominated by the magnetic forces of attraction that linked the temples of the various deities to underground telluric currents. The temple of the Pantheon (in classic Greek: pan-theon, all Gods), dedicated to all the gods, was the nerve centre that is believed to have enabled the Roman people to exercise their dominion over the world. Over centuries, this balance was lost. And so did Rome which lost its connection with the deep inner, esoteric tradition, goes the belief. Consequently, it was invaded physically by the Barbarians and spiritually by Christianity. For esotericists, the Church of Rome was founded with an act of magic. An act of magic performed this time on the Etruscan catacombs which at that point, after the persecution of Christians, contained the blood of the martyrs. This blood, according to them, created a spiritual bridge between heaven and earth that was then reflected in the creation of the  Church which has dominated the city for centuries since then. The sacrifice of the martyrs therefore was a conscious act of sacrifice, it is said, in order to allow the Pontiff control on the magical currents present in the subsoil of Rome, to guard forever their access to the ‘Invisible World’ and to give him power, both spiritual and political, over the city. The private investiture that the Popes receive in the underground chapel near the tomb of Peter serves to renew the immersion in the very strong magical currents that still today make Rome one of the ‘omphalos of the world’.


The esoteric value of some places, however, has not been affected. According to popular tradition, for example, the large hole on the ceiling of the Pantheon (converted into a church) was caused by the horn of a demon, which was livid after he was evicted from the temple. The same tradition says that the moat surrounding the temple is of satanic origin. Apparently a magician called Baialardo had made a pact with the devil: later, repenting the act, he decided to fly (in a single day) to Jerusalem and dissolve his pact praying in the sanctuaries of the holy city. Returning to Rome, he made it to the evening mass at the Pantheon. But the devil was waiting for him at the entrance of the temple, trying to prevent him from entering the church. Baialardo entered the Pantheon with a trick, and the devil, furious, spent a day and a night running around the church looking for him, thus creating the moat that still surrounds the Pantheon. There’s another place considered magical: an ancient door in the gardens of Piazza Vittorio. The door, covered with strange inscriptions, was considered to be one of the gates of hell. The mysterious writings are indeed alchemists’ formulas inscribed there by the Marquis of Palombara, a rich and credulous Roman nobleman, in 1649. At that time a student of alchemy, Giuseppe Francesco Borri, a favourite of Queen Christina of Sweden, pretended to be a great alchemist and claimed to have found the elixir of long life and the philosopher’s stone capable of turning everything he touched into gold.

Borri, it is said, sold the formula of the elixir to the Marquis who, however, had not been able to decipher it. He had it made to engrave on the door of his villa, hoping that some passers-by, by chance, will help him decipher it. The villa is in dilapidated condition, but the door has miraculously survived becoming a real catalyst for all the ‘magic hunters’ of the city. According to another tradition, the door was part of an ancient temple dedicated to the Egyptian Goddess Isis. And the cult of Isis was popular for a long time in Rome. A huge temple was dedicated to the Goddess, located near the present Via del Seminario. You enter the sanctuary from what is now Via del Piè di Marmo, and inside there was a large avenue flanked by pairs of obelisks. In the sixteenth century, the temple was reduced to ruins. One of the obelisks, in which they say still lingers the spirit of the Egyptian king Ramses II, has been placed on the Fontana dei Fiumi in Piazza Navona. Another is in Piazza della Rotonda, facing the Pantheon, the other is on the elephant’s back in front of the church of Santa Maria sopra Minerva—built, as the name suggests, above a temple dedicated to the ancient Roman Goddess of wisdom. Despite the destruction of her temple, Isis did not leave the city, goes the belief. A statue erected for her can be found at piazzetta San Marco, close to Piazza Venezia. It is called ‘Madama Lucrezia’, the one and the only female of the six ‘talking statues’ of the city known all together as the ‘Congregation of the Wits’. The most famous of these six is called Pasquino. In the past, critics of the Pope posted their notes on the statue mocking the pontiff and hitting out at corruption and arrogance of Rome’s religious leaders. The Pope used to have the statues guarded day and night to no avail.

Witches of Rome, according to the popular tradition, lived on the Esquilino hill. Legend has it that on the night between August 4th and 5th, the Virgin appeared in a dream to the noble Giovanni and his wife who had decided to allocate their patrimony to the construction of a basilica dedicated to the mother of Jesus. The Pope also, that night, had the same dream, in which the Virgin told him her church would rise in the place where the next day a miracle would happen. The next day, the whole city saw the top of the Esquiline, the ancient cursed hill of the witches, whitened by an astonishing snowfall at the peak of summer. The actual, wonderful, basilica of Santa Maria Maggiore was built on that spot. In Campo de’ Fiori, a statue is dedicated to the memory of the philosopher Giordano Bruno, burned there since he was considered a heretic—don’t look into his eyes, we say in Rome, because that will give you bad luck. The same luck of the women burned there accused of being witches just because they could read and write or because they knew the use of medicinal herbs and remedies.

The Church has not yet apologised for executing them. In old Rome, one could easily be accused of witchcraft. Not even the Pope escaped such accusations. In the basilica of San Giovanni in Laterano, there is a plaque (in the right aisle, near the Torlonia chapel) which is now considered a kind of ‘barometer’ of the health of Popes. According to popular belief, every time a Pope is about to die, the headstone oozes water and emits sinister crunches of bones. The plaque is the epitaph of Pope Sylvester II, who died with the reputation of being a necromancer, sorcerer and friend of the devil. It seems that poor Sylvester was indeed simply an expert in mathematics and astronomy—back in those days, these subjects were synonymous with witchcraft. It is believed that it was the Satan who placed him on the throne of Peter.

Finally, if you happen to be in Rome on the night of January 7th, make sure you are not in the area between Piazza Navona and Ponte Sisto because you could meet a lady ghost called ‘la Pimpaccia’. That was the nickname given to a woman named Olimpia Maidalchini who married into the noble Pamphili family. Princess Olimpia was considered a witch. People of yore said she was running a brothel for the Vatican and that she was corrupted and manipulative. She was called also ‘la papessa’, the female Pope, because having married the older brother of Pope Innocenzo X, she became the right arm (and many say the mistress) of the Pope of the time. Innocenzo X died in the evening of January 7th. On that night, it is said, Olimpia’s carriage, surrounded by flames and loaded with jewels and money, had been seen heading out of the Vatican and then to the Tiber from Ponte Sisto. Despite being hated by people, Olimpia was a patron of the arts. Not so many are aware of the fact that she was the patroness of Bernini and that we owe to her the patronage of the construction of the beautiful Fontana dei Fiumi in Piazza Navona, one of the masterpieces of the sculptor.

A last advice when you look at the fountain: if you are in love and strolling the square with your husband, your fiancée or your lover, be sure to turn around the fountain only clockwise otherwise your relationship will end very soon. And of course, don’t forget to throw a coin into the Trevi Fountain if you want to come back to Rome! 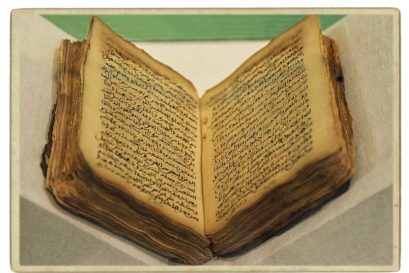 The medieval glory of Timbuktu in golden letters 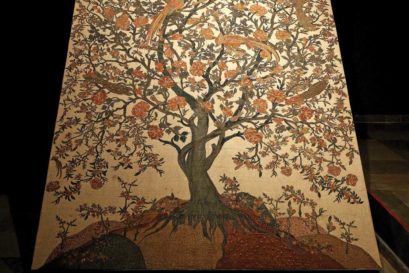 Celebrating the role of Martand Singh in India’s textile tradition