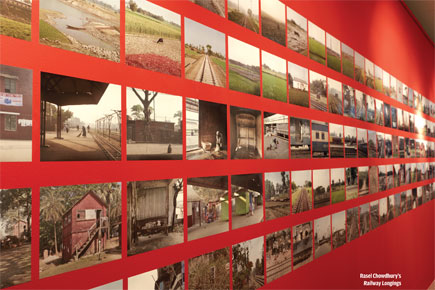 A Pakistani artist walked up to the Liberation Museum by accident. She was trying to make her way back to Fars Hotel from the Shilpakala Academy, where the third edition of the Dhaka Art Summit (DAS) was being staged. It was late in the evening. It was a short walk, barely 550 metres, but given the confusion of intersecting roads it was easy to wander into the wrong lane. I had similarly lost my way a day or two before. “I put on my American accent and politely asked for directions,” she told a bunch of us the next evening as we tanked up on red wine and feasted on Bangla cuisine at Kasturi Garden, as the Bauls on stage serenaded our motley international troupe with the mystical songs of Lalon Fakir, known across the two Bengals as Baul Shamrat, the King of Bauls.

Another curator, I learned later that night, had also been brutally reminded of her shared roots with the land of the oppressors of the Bangalis, who once were a part of Pakistan, just like the three now distinct regions, India, Pakistan and Bangladesh were all once a singular entity governed by a common coloniser, the British. She had visited the National Museum in Dhaka and having witnessed the starkly illustrated display of the 1971 struggle for liberation, felt like hiding her face in shame. Both women were aware that they had successfully procured visas to attend the summit mainly because their passports were not Pakistani but American and British respectively.

Like the Pakistani passport, the Sri Lankan equivalent is among the ten worst to possess in the world, a fact that the mysteriously shrouded dancer Venuri Perera mentioned as she frisked my body in an unlit makeshift room at the mouth of the performance pavilion at the DAS, probing my varied histories of identity and other particulars as if mimicking the tedious proceedings of a visa interview yet twirling herself around the periphery of my body as if to establish an artificial sense of intimacy. I played along as she investigated me.

I heard her amused giggle from beneath her hooded face. When she was done with me, she volunteered her particulars. She was in her early thirties, had been divorced once, and owned a Sri Lankan passport, which is as bad as owning an Afghan one. She wanted to go to America for the purpose of her art. She needed to collect a thousand thumbprints from holders of more privileged passports in order to get a visa, could I donate an impression? She held a small bowl in front of me containing specks of vermillion grains and looked me in the eye. I could anoint any part of her face. I chose the underside of her chin for its closeness to her mouth. She smeared the centre of my forehead, my notional third eye, and permitted me to re-enter the world outside her darkened booth.

These were some of the questions swimming through my brain as I seated myself in the musty AV room at the Liberation Museum. A local curator welcomed us. “What is a museum?” he asked rhetorically. “It’s about the connection between past and present,” he offered by way of an answer before introducing the film we were meant to watch of the Bangla rebellion against the Pakistani army that was responsible for one of the worst genocides in contemporary history. “Enjoy the film,” he said, as if it were possible to relish a film about the horrors of regional politics. The documentary was hard-hitting, to put it mildly, composed of historical footage from the late 60s and early 70s, as East Pakistan was struggling to carve out its own identity, rejecting its existence as a corollary of West Pakistan from which it was separated by thousands of acres of land that constituted an Independent India, and with whom it was conjoined purely on the basis of religion. One scene stood out, Zulfikar Ali Bhutto at the UN Security Council on 15 December 1971, boldly proclaiming, “I will not take back a document of surrender from the Security Council,” and then, to punctuate his oratory skills, tearing the contested sheet of paper and rising to walk out.

Founded by industrialist and collector couple, Nadia and Rajeeb Samdani, and helmed by artistic director, Diana Campbell-Betancourt, the bi-annual Dhaka Art Summit has, over a six-year span, positioned itself as the largest platform for South Asian art. This was most emphatically evident in the just-concluded third edition where the four-day-long event served as a febrile meeting ground for over 600 artists, curators, writers and collectors from all over the world. At least 50 international journalists were present to cover the free-for-all summit that procured the attendance of over 150,000 local visitors and that, unlike its immediately neighbouring countries, was organised with the full-fledged support of the ministry for cultural affairs. The support of about 80 partnering institutions, including Harvard University, Centre Pompidou, Rockefeller Foundation, the Oslo-based Office for Contemporary Art and the Swiss Arts Council, enhanced the summit’s international stature.

The summit offered opportunities for artists from the region to be discovered by prestigious international galleries and curators of premier art events like the Gwangju Biennale and Documenta. The continued adventurous and ambitious focus on solo projects alongside meticulously curated parallel exhibitions as well as a debut four-day- long Creative Writing Ensemble and film programme advanced the summit’s flair for privileging the creation of discourse over commerce. South Asian art practitioners were in dialogue with heads of international museums on the politics of regionalism and on panels titled ‘Can Culture Counter’, raising pertinent and sometimes uncomfortable questions about the West’s recent proclivity towards discovering the so-far institutionally marginalised art history of the East.

But what marked this third edition was its bold embrace of the political through the showcasing of works embodying dissent or revealing conflict or submersed in reflections on the consequences of militancy, the exploitation of labour, and the still relevant issue of identity. Nada Raza’s impeccably curated show, ‘The Missing One’, was a stellar meditation that adopted as its points of departure The Story of The Missing One, a 1986 story by Jagadish Chandra Bose that is believed to be one of the first instances of speculative fiction in Bangla, and a Gaganendranath Tagore futuristic painting, Resurrection, to create a visually poetic text about the cusp between science and spirituality and its iteration within a South Asian context where the two domains uniquely comingle.

Sharing sectional floor space with it, though, was Mining Warm Data, a differently political and immersive show curated by Campbell-Betancourt about ‘warm bodies, cold bodies, and metamorphic bodies transitioning between these states’ that ‘raise the emotional temperature in the space to enable us to feel the pulse of warm data, rather than the cold encounter of slickly packaged statistics.’ Works in this show were in dialogue with each other to offer a startling narrative of oppression, autocracy, and dissent. The first chapter of Amar Kanwar’s iconic 2008 filmic project The Torn First Pages was screened in a backroom, behind Pablo Bartholomew’s Memento Mori, a recalibration of termite-infested slides from a National Geographic assignment in 1986. Kanwar restored to public memory the figure of Ko Than Htay, the owner of a popular bookshop in Mandalay who engaged in a subversive act of censorship where he would tear out the first pages of books and journals that, by military decree, were obligated to carry slogans of the junta so that his customers wouldn’t be subjected to their propaganda.

This reverse censorship was incidentally echoed on day three of the summit, when, owing to a threat by the Chinese Ambassador in Bangladesh, organisers were compelled to shroud a suite of compelling photo-documents by Ritu Sarin and Tenzing Sonam, entitled Last Words, that revealed the notes left behind by five of at least 149 Tibetan monks who immolated themselves to protest China’s occupation of Tibet and the Dalai Lama’s exile. The veiled exhibit was adjacent to Afghan artist Lida Abdul’s dramatic 1999-2001 video of the head-scarfed refugee artist opening her mouth and sticking out her tongue to reveal a passport-sized photo of her uncle who was killed in a conflict and a slightly larger photo of a bombed-out neighbouring building.

Hasan Elahi’s Thousand Little Brothers, an exaggerated grid of 32,000 mundane images was inspired by a six-month-long FBI investigation of him because of an erroneous tip-off linking him to terrorist activities in relation to 9/11. Elahi chose to flood the US government with information in the guise of hundreds of photos of his daily life for over a dozen years. It quite directly referenced Land of the Free, a brave body of work by Bangladeshi photographer Shumon Ahmed that was part of the solo projects that drew from his understanding of the story of Mubarak Hussain Bin Abul Hashem, who was flown back home to Dhaka in 2006 after enduring five years of torture and imprisonment at Guantanamo Bay. There was no evidence to link him to terrorist activities, but he returned with a fractured sense of self, which Ahmed tries to get the viewer to empathise with through stereoscopic goggles, headphones, imagery and sound that replicate the claustrophobia that surrounds an experience such as his.

Like the inflammable matchsticks artist Manmeet Devgun used to construct and deconstruct a single sentence over six hours across two days as visitors trampled across its endlessly emerging surface— called Time has a start and an end: Do I believe that notion—the staggering collection of artworks repeatedly destabilised the viewer, beseeching her to question what it means to live in a supposedly globalising world where borders have, ironically, never felt so impermeable, where the crisis of refugees is ongoing, where language is still at the forefront of most conflict, coupled with the issue of religious identities. Even in the euphoria of ‘transnational togetherness’ were fissures that harked back to complicated histories that require constant rewriting, lest they be forgotten. The summit was a reminder that art can never be an act of surrender and that in the shadow of the threat of nuclear destruction, a work of art must urgently encompass the predicaments of both the victims and the perpetrators of human indignities.