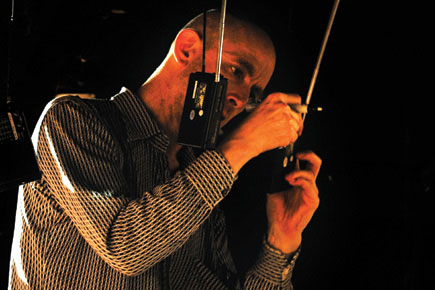 One man’s white noise is another man’s art. As you enter the Bhuta gallery in the Crafts Museum, Delhi, you can’t miss the persistent noise in the room. As you look around, you don’t see anything other than the animalistic statues that the Bhuta art tradition embodies. Then you look up, and see row upon row of radios hanging from the ceiling. They aren’t tuned to any station, but to frequencies between stations, where white noise or static resides.

Jason Kahn, the New York-born Zurich-based artist, has done this intentionally. His sound installation, titled In the Air, aims to affect how we perceive the space around us. “For this, I use abstract sound, with no melody or rhythm. This sound does not attract attention to itself. Instead, it gives the impression of sound shifting as you move through the physical space,” he says.

And shift it does. If one stands in the centre of the installation, it feels like the room is awash with uniform sound, coming from every direction. Close your eyes and there’s no way to tell which side the sound is coming from. The volume is kept low, so no single radio outshouts any other. Each of them is tuned to a minutely different frequency; the difference is inaudible unless you move.

As you walk through the room, it feels like wave upon wave of static is crashing over you, changing, swirling, breathing, as you change your physical location in the room. “That is exactly what I wanted to show! It has to do with physics also. As you move in the physical space, the auditory space also changes. I encourage you to open your ears and mind to the sounds around you, and just feel it,” Kahn says.

Speaking of physics, did Kahn realise that a portion of the static one hears on the radio is a remnant of the radiation emitted during the Big Bang, and that his sound installation is, in essence, bathing listeners in the sounds of creation? “No, I didn’t, but it is very interesting. This installation is based on sound and space, so it does have some physics in it. But different interpretations are welcome,” he says, with a smile.

The installation is a joint effort of the Swiss arts council Pro Helvetia and Delhi’s Crafts Museum. Ideally, Kahn likes to use neutral, empty spaces for his sound installations, but at the Crafts Museum, his radios have to share space with the Bhuta sculptures.

The effect is mesmeric at so many levels. At eye level are statues of animals and animalistic men, wide-eyed and gaping. As you raise your eyes, you see the incongruous radios hanging from the ceiling, as if to emphasise their alien nature, compared to the statues. And permeating the whole room is the sound, soothing yet aggravating, disorienting and engaging.

“It was a bit strange for me when I entered the room and saw all the statues. I usually use neutral, usually empty rooms in my installations,” says Kahn.

Kahn is in Delhi on an artist-in-residence programme at Sarai for the entirety of November. Seeing that most of his work is sound oriented, and he is interested in the diverse sounds of the world (he once sat on the Swiss mountains, recording the sounds of the wind, cow bells, and insects), the obvious question while he is in India is how he reacted to one of the noisiest countries in the world. “India has many diverse sounds, it is very exciting. Delhi is only a fraction of the country. I have been to Rajasthan, Gujarat, Kerala, Rishikesh, Varanasi, Mumbai and Chennai. All the sounds are so different. I routinely walk around with a mike and recorder, capturing any sounds that I find interesting.”

Sound art is a relatively recent art form, only about 30 years old. In India, it is even younger, with Jason Kahn being one of the first sound artists to exhibit his work here. As the name suggests, sound art focuses on aural stimulation as opposed to visual stimulation through paintings and sculptures. One of the earliest examples of sound art was by a collection of artists at the New York City Sculpture Centre in 1983. Named Sound/Art, it is believed this exhibition originated the term ‘sound art’. A formal definition is tricky, as even those considered founders of the form don’t agree on one. Some experts explain the concept in relation to more traditional art forms. A sound artist uses tones and sounds much like a painter uses colours and paints. Others say that the name distinguishes it from other forms of music since the sounds used are confined to the environment and setting of the installation; they cannot be picked up and played anywhere.

The next project Kahn is working on is a radio show on people’s favourite sounds of their city.

Kahn’s installation is the first of its kind in the Crafts Museum, explains Dr Ruchira Ghose, chairman of the museum. “It is very interesting to see the traditional art exhibits alongside such contemporary art. It really strikes a chord with the younger generation.”
Chandrika Grover Ralleigh, head of Pro Helvetia India, agrees. “I think it works beautifully. The machine intervention in such a traditional space is a novel concept here. I would like to think that we’ll do other such collaborations with contemporary art. This is the way forward,” she says.

And indeed it works. There are few collaborations such as this, and the sound installation scene in India is still nascent. Catch it if you can. It’s rare to saturate yourself with the sounds of creation while walking along the traditional spaces of Indian history.