In artist Golak Khandual’s latest work, birds flee for their lives from ugly Delhi buildings. His visuals evoke a constant tussle between the city of old and the new 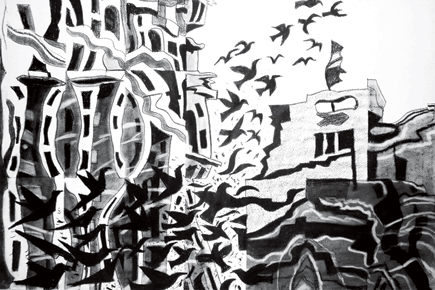 
Golak Khandual is an architect, painter and photographer and divides his time between the villages of central India and Delhi. His new show, called New New Delhi, is an exhibition by an artist shocked by the concrete ugliness of the new New Delhi. Excerpts:

Q Why is your show called so?

A It’s about the dramatic changes I saw while coming to Delhi again and again from the interiors of India. We’ve put on this facade of modernity. There is tremendous hoopla surrounding an event like the Commonwealth Games and the urban landscape is changing because of that. My show is an immediate encapsulation of this transition.

Q But how is your show different? We’ve quite a few artists attempting to catch the ‘big change’?

A The intention of this show is a critique against the notion we have that ‘Hum Kisi Se Kam Nahin’. So the new, contemporary architecture of Delhi is blindly celebrating that, without an iota of sensitivity to the ecological and environmental harm it is doing. My show, I’d like to think, probes that notion.

Q What about Delhi strikes you the most?

A Oh, its absolute contradictions. Malls and huts. Flyovers and shanties. Multiplexes and jhuggis. Hi-fi housing societies in Gurgaon and the drinking water shortage. Rivers that have become gutters. Who pays for all this devastation? The common man.

Q But is the new New Delhi you speak of really all that new? And isn’t a lot of the New Delhi you see also not changed at all? You can find it as feudal and dark as it was ages ago…

A Good point. Portions of Delhi have not changed at all, and perhaps worked as they once existed. But those areas are the ones that are now fast losing their space. We need to seriously address what the changes to the city imply.