No tantrums, no parental cajoling, no reprimanding. The Bookaroo fest was three days of fun, with stories, doodles and secret languages 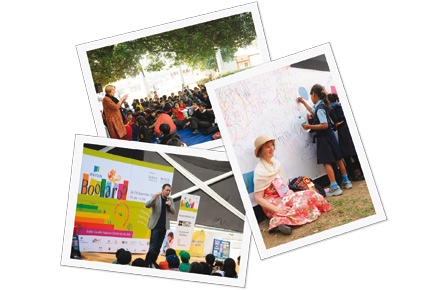 No tantrums, no parental cajoling, no reprimanding. The Bookaroo fest was three days of fun, with stories, doodles and secret languages.


For once those clichéd sentiments of parental expectations, peer pressure, competition and examinations were conspicuously absent. It was a child-friendly three-day bonanza of literary and fun activities at the third edition of the annual Aviva Bookaroo Festival of Children’s Literature held recently at Delhi. Eager parents, teachers and just young collegians, it seems, were so taken up with the idea of a festival of this kind that many of them opted to be volunteers after the first day. Even with parental oversight, there was a relaxed, mela-like aura. Nowhere did one spot a child throwing tantrums, or being pushed into things by parents, or reprimanded for being inattentive to the ongoing proceedings.

Adding to the convivial atmosphere was the spacious layout of the event in the sprawling grounds of the Indira Gandhi Centre for the Arts. Using makeshift partitions to cordon off activities, the grounds provided an easy walking arrangement for children to travel from one venue to another. Also, the activities were age-specific, so that teenagers did not have to sit through stories about angels and animals brought alive under a large maulsari tree, aptly christened the ‘Kahani Tree’ by the organisers. Instead, they could hone their skills at starting a secret language with a little help from Lian Turner’s characters in the ‘Museum of Thieves’.

The variety of craft projects took all the boredom out of indoor activities and even gave adults a host of ideas to occupy the summer holidays and rainy evenings. There were tips on how to make pop-up books, or mice, or masks, or play things with waste material. New games like sky football gave this event an exciting twist. The older group had the option of joining a workshop for creating their own comic books using pictures and words in clever juxtaposition.
But it was the doodle wall that stole the show as far as the tiny tots were concerned. Yes, there were illustrators with impeccable reputations from the print world at hand to help young artists, but they were soon made redundant as every participant preferred to do his own thing.

Of course, the biggest draw at the three-day fest was the interactive sessions with authors. Judging by the long queues at the book-signing session after the talk, it was evident that Anthony Horowitz had stolen a march over the other speakers with his ready wit, friendly manner and by obliging his fans with one-to-one photo opportunities and promises to answer questions over the mail on his return to England. Sure enough, it was curiosity about his next book that formed the bulk of queries fielded, and Horowitz did not disappoint on that score.

Others like Deepak Dalal aroused concern for tigers and other endangered aspects of the environment with a well-documented slide show. As all the authors had a way with children, their appeal even with subjects like ‘imagination as a precious gift’ managed to get across to listeners in the very tender age group of 6-9 years.

As the events were spaced over an entire day, there was no disappointment by way of missed events or clashing programmes. But some of the venues extending to the new premises of the IGNCA became unattractive as the walk and markings to the action spots were too confusing. And the mind-boggling list of choices, from authors to activities, left some children feeling bewildered. A slightly pared-down calendar or a selective option given to children at the start of the festival, could make the three fun-filled days all the more exciting for youngsters.