Calcutta Once and Forever 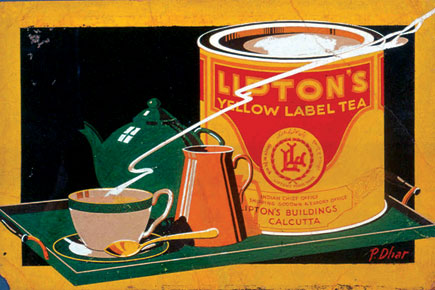 
When Parimal Ray, now in his 70s, started his matchbox collection in his school days, he had no idea they would become prized collectibles decades later. “I had 1,000-odd labels with me, which I gave to my friends since I could no longer maintain them,” he says. The collection is now deemed a rare one and was made available by Ray’s friend, Soumen Pal, for a recent exhibition at the Seagull Foundation for Art, Kolkata.

And what makes them invaluable? Other than the fact that they are more than 50 years old, these labels showcase how such a tiny consumer item became a major swadeshi enterprise and fought competition from imported matchboxes made by Austrian, British and Swedish companies. The outcome—foreign company matchboxes responded with an array of Indian images. In fact, by the 1920s, Swedish match company Wimco became the market leader. Howrah Bridge and nationalistic pictures jostled for the consumer’s mindspace with pictures of nautch girls and singers like Gauhar Jan, apart from Raja Ravi Verma’s mythological paintings on these tiny labels.

Titled The City in Archives: Calcutta’s Visual Histories and curated by art historian Tapati Guha-Thakurta, the exhibition displays as many as 89 panels of more than 550 digital prints of visuals from 19th and 20th century Calcutta. Grouped under specific themes—print production and graphic design; leisure, consumption and entertainment; portraits and personalities; urban sites and spaces—the exhibition takes you through a visual journey that is fascinating, to say the least. Where else would you get to see rare book designs and illustrations in children’s books to rare maps, picture prints, commercial art, movie posters, photographs and even covers from old HMV records which you didn’t even know existed?

For Guha-Thakurta, who is also a professor of history at the Kolkata-based Centre for Studies in Social Sciences, documenting and archiving material started way back in 1996 with a couple of like-minded professors at the centre. “Collections such as these are fast disappearing, making their documentation and display urgent,” she says. Institutions such as the National Library, Amrita Bazar Patrika-Amrita-Jugantar Employees Association, Bangiya Sahitya Parishad, Chitrabani, Chirtakoot Art Gallery and so on have shared their collections with the centre. However, Guha-Thakurta is most thankful to individuals who have preserved such art collections. “Interest in such material doesn’t go beyond one or two generations. It is crucial for someone to document it for posterity,” she says. The material is open to researchers for reference and is a treasure trove for those who want to work on social and cultural histories.

Take Sanjeet Chowdhury’s collections, for instance. An ad film and corporate filmmaker, Chowdhury has offered his collection of oleographs and lithographs dating back to the 1880s, apart from art magazines and photographs. “Although the art magazines were passed on to me by my father, the print collection is entirely my own, as are the photographs,” he says.

Usually, the institution documents such collections with the help of slides, transparencies and digital copies, while owners get to keep the originals. In some cases, however, people have handed over their collections for safe-keeping. Since the project is short on funds for preservation, it sticks to documentation and archiving.

The archive also has extensive documentation of colonial and postcolonial maps of the city. In the 1740s, Kolkata evolved as a site of map-making and became the centre for imperial cartography. The most interesting of them is the first vernacular map of the city, Romanauth Dass’ Kalikatar Manchitra, which, printed in 1884, was meant for the ‘common people’. Compared to the English maps of the city, this one has a different classification of information, and bears locally-used names of places such as Mechobazar and Ultadengi.

The photographs are another story altogether. Rare collections from accomplished photographers such as Gaganendranath Tagore, Ahmed Ali, Siddhartha Ghosh, Annapurna Datta and Debaleena Majumdar give us slivers of weddings in the 1890s, political unrest, dining at upmarket restaurants as well as adda sessions at the Coffee House. Not to forget, rare pictures such as a self-portrait of Gaganendranath Tagore in 1892, a 1960 shot of West Bengal’s former Chief Minister Bidhan Chandra Roy treating patients before going to Writers’ Building, shots of Ustad Bade Ghulam Ali Khan and Kazi Nazrul Islam, and much else.

But these aren’t all that is rare. The archive has a few head-and-figure studies by artist Jamini Roy which are quite different from his ‘folk-style’ works and seem inspired by Japanese woodcuts as well as Bengali patachitras. Works done by less-known Bengali artists such as Gobardhan Ash, Shanu Lahiri and Abanindranath Tagore are on display too.

Uma Goswami, the widow of Raghunath Goswami, a well-known graphic designer known for promoting folk art forms, has lovingly preserved his collection of advertisement compositions for Tata Steel, Titagarh Paper and Jabakusum hair oil from the 1950s, and his calendar designs for companies such as Philips and Indian Airlines in the 1960s and 1980s.

But Chowdhury says there are several collectors who don’t even want to show their works, much less share them with others. “I approach many of these people in good faith, ask them to give me their collections, get them digitised and return them so that they can be shared by more people,” he says, adding that collections are worth nothing if not shared.

At the same time, there is a difference between hoarding and collecting, he emphasises. “When you learn from what you collect, covet the next piece, try to find out more about the artist, your hoarding habit becomes a collectors’ obsession,” he smiles.

Guha-Thakurta says that these collections are a way to look at the changing tapestry of the city through different mediums. At the same time, however, such archives help you understand how each art evolved—though not necessarily for the better.

“I am particularly proud of the calendar art and original art works from advertisements that I have collected. It’s not the same anymore. Children are more interested in video games, and their parents, in their studies,” rues Parimal Ray, who, incidentally, also has an original art work by Satyajit Ray. Now are you listening?