Sreesanth After many a memorable gig off stage, cricketer Sreesanth is making his musical debut on stage with the band S-36 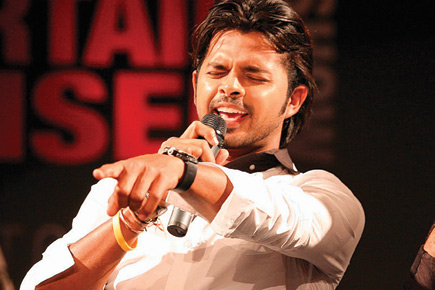 Sreesanth After many a memorable gig off stage, cricketer Sreesanth is making his musical debut on stage with the band S-36


As far as the performance quotient goes, Santhakumaran Sreesanth is more than an ordinary cricketer. He has hit headlines several times for reasons such as an impromptu jig after hitting an Andre Nell delivery out of the ground in South Africa, an animated stare at Australian captain Ricky Ponting in India, a Bollywood-style hip shake with Shah Rukh Khan on stage, and crying after being slapped by Harbhajan Singh at an IPL match. These ‘ingredients’ make Sree a different package.

Now,  many such incidents and antics later, he is set to make his formal debut on stage with his newly-minted band S-36. The band derives its name from the first letter of the cricketer’s name followed by his favourite, believed to be luckiest, jersey number. It has nothing to do with music. The band has already dished out some of their original songs, alongside improvised contemporary English and Hindi numbers, for their curtain raiser in Kochi. The official launch is slated for Dubai in late May.

Sree’s singing at Kochi had about as much impact as one of his wayward deliveries. Yet, he does seem to be substantially involved in the band; he’s also penned lyrics for some of their songs. “It’s more a family than a band. My job is to be with them, dance a bit, sing a bit, write lyrics a bit, play the drums a bit, play the piano a bit. I love everything, so it’s more of entertainment,” said Sreesanth, on stage at Kochi.  This was held at a time when the quick bowler had been overlooked by Indian selectors for the World Cup squad, so he was somewhat subdued. Post World Cup triumph, we can expect a far more excitable Sreesanth on stage.

“I am a spiritual, musically inclined, pianist, dancer, poet, tattoo-lover, God-loving, national cricketer and a very proud Indian,” says the temperamental pacer on his Twitter profile. One of his sisters is a television actress. And the other is married to popular Malayalam playback singer Madhu Balakrishnan. Clearly then, performing seems to run in the  family.

Balakrishnan is also the lead singer of S-36. “We received overwhelming response,” he says. “Sree is our star performer, and, of course, he is not bad in singing [sic].”

“We have planned shows in four cities—Chandigarh, Bangalore, Kolkata and Mumbai. We hope Sree will be able to be with us in all the shows,” says Deepak Warrior, who functions as the coordinator of the band.

Though Sreesanth can play the piano and drums a little bit, he is quite unlike his Australian counterpart Brett Lee who is part of a rock outfit called Six and Out, a band comprising his brother Shane and fellow cricketers Brad Mcnamara, Gavin Robertson and Richard Chee Quee. Balakrishnan apart, the other regular members of  Sreesanth’s band—Anoop, Narayan Unni, Sandip, Arun Roop and Chippu—were picked after nation-wide auditions.

While Lee plays lead guitar for Six and Out, Sree has no regular musical role in his band. The similarities between Lee and Sree end with both having their own band. (And we won’t even get started on bowling speeds.) The other contemporary cricketer who is into music, Graeme Swann of England, also seems to have a genuine aptitude for music. He is lead singer for a Nottingham-based band named Dr Comfort and the Lurid Revelations.

Despite his non-compatibility with musical chords, Sreesanth is invariably greeted on stage with rousing applause, thanks largely to his attitude. “The gig was going well, but everyone wanted to hear their favourite star sing,” says Warrier  of the audience at the show in Kochi. Sree has got this knack of getting an audience, something  he has displayed on numerous occasions—be it on stage with Shah Rukh Khan or celebrating inside the dressing room with his team.

Several SMS jokes on Sreesanth were doing the rounds after India’s World Cup triumph, especially among Malayalees. The most popular one anoints him the highest-paid non-performer ever in the wake of the recent political debate around pay-for-no-work in the trade union sector. Non-performer or not, he does enjoy enormous support among Malayalees the world over, something he is counting on to make S36 a success.