Bond with the Rest

Open speculates on what the prospective suitors for MGM might do with the studio’s money-spinning Bond franchise. 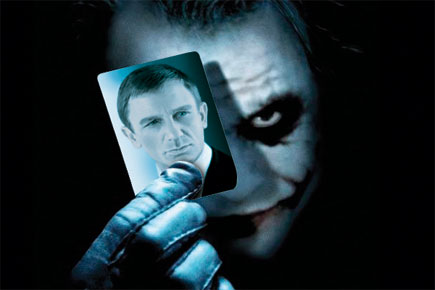 Open speculates on what the prospective suitors for MGM might do with the studio’s money-spinning Bond franchise.


Legendary Hollywood studio MGM, maker of Gone with the Wind, is near bankrupt and up for sale. But the studio still has an incredibly valuable asset: its James Bond franchise. Six studios have already shown interest in buying MGM, including India’s Reliance Big Entertainment. But what’ll happen to 007 once its ownership changes? We speculate.

The plot. The unthinkable is finally happening. James Bond is getting a sidekick. Plus, of course, there will be a certain amount of sexual ambiguity to Bond’s character, possibly as a tribute to Batman and Superman.

The New Bond movie Bond and 006 tiptoes the fine line between close male bonding and a lot else. As the curtain lifts, Bond is seen with a glass of wine in Tuscany, wearing a linen suit. As he walks away, the bistro suddenly gets blown to bits. The only other one left standing is a boy of 19, the owner’s son who’d run out to return Bond’s cellphone. True, it’s inspired by Batman and Robin—but well, that’s the new twist.

Bond takes the boy under his wing, and they go out fishing together. Bond starts training him in the ways of the world to take on the evil Dr No’s third cousin, Hell No, who blew up the restaurant while testing a pulse gun. But above everything, this movie is the story of a relationship between two men and their quest to nail the man responsible for the death of 006’s family. It’s a rather touching story.

Bond beds no women. Warner clearly makes their heroes work for their romps—Christopher Reeve had to do three movies till he finally managed to lay Lois Lane, and then too he lost all his powers. This, however, will be the first time you’ll see Bond driving around with anyone who doesn’t have 34-D breasts. But aah well, can’t win them all.

The plot.  Jibes by Matt Damon, who plays Bond’s fist-fighting amnesiac American counterpart Jason Bourne, about James Bond being an ‘imperialist’ and a ‘misogynist’ have hit home with screenplay writers. Misogynist is okay, but 007 in Her Majesty’s Service doesn’t want to be dubbed an imperialist. So Dominic Greene, head of Quantum, a company trying to control Bolivia by taking over its water, was found dead with motor oil in his stomach, but there was a bigger plan afoot. The uber evil Quantum, supported by the American and British governments because of their greed for oil in the desert, was in no mood to abort its mission.

Bond does a Michael Moore. He takes off the suit, dons a flannel shirt, shuns Bollinger, gives up eating Beluga (because of whale concerns), and picks up a camera to unmask the true face of the rich world’s hunger for oil.

But Bond still drinks martini, only now he eats the olive, the bar snacks and everything else. Tragically, he also has to fight his handlers (this Bond isn’t flush with funds). Omega has recalled its watch, Aston Martin has repossessed the DB9 and Sony Ericsson has taken back the surprisingly small cellphone. His romps in the sack are not anything you’d want to see. Somewhere between it all, he discovers M’s real name—Michael Moore. It had always been him. Disgusted with the rich world’s exploitative ways, Moore had quit MI6 to take on Big Money, Big Oil, Big Enter… uh-oh, no, not that one.

This 007 is a huge departure from the one we’ve grown up with. But what do you expect if a studio known for making indie films takes over a franchise as mainstream as Bond?

THE MEN WHO STARE AT BLONDES

BEST KNOWN FILMS: The Men Who Stare at Goats, Capitalism: A Love Story

The plot. We need to tell you a little more about this studio because it is not so well known. The tragedy is that the studio is accustomed to multi-starrers like The Men Who Stare at Goats that had George Clooney, Kevin Spacey, Ewan McGregor and Jeff Bridges. It also made Law Abiding Citizen, which had Jamie Foxx and Gerard Butler. Compare this to Bond, who’s not used to being part of an ensemble cast unless all the rest are in bikinis. The other concern, of course, was that the studio is used to making either dark thrillers (Law Abiding Citizen) or comedies (Goats). The James Bond franchise is neither.

But the new Bond has adapted well. It’s the new wave, after all. Goats was a look at an army unit of special forces trained as Jedi warriors and skilled in the art of invisibility, remote viewing, walking through walls, and—get this—stopping the hearts of goats by just staring at them. The unit ends up in the use of an evil Kevin Spacey, but the movie ends with the rest of the star cast poisoning the base’s water supply with LSD and freeing the goats and locals.

In Men Who Stare at Blondes, Spacey returns as the evil mind control freak who has learnt to stop the hearts of buxom blondes. Bond’s mission is to locate his secret bosom-shaped mountain hideaway and stop him. There’s a girl, but Spacey makes her heart stop while she and Double O are at it. And that’s when the war really begins.

TANDOOR IS NOT ENOUGH

The plot. It’s a secret that Hollywood and M have held close to their bosoms ever since Octopussy; get ready for an explosive exposé when The Tandoor is Not Enough hits cinema screens. While the Bond franchise rebooted itself with Casino Royale, the new movie marks the return of Kamal Khan’s henchman from Octopussy, Govinda (Kabir Bedi).

En route, Bond meets Bollywood hottie Diwali Sen, who beds him and dumps him via SMS—the first for a Bond. Then there are some spectacular shots of his Aston Martin stuck in Delhi’s Chandni Chowk traffic and an auto rickshaw crashing into it, and of the Jama Masjid domes.

This music-happy film pits Agent 007 against an evil Dr Tikka, who’s trying to take over the world by lacing chicken tikka masala and tandoori bread with mind-control toxins. What he doesn’t know is that Dr Tikka is actually Govinda, who an earlier unsuccessful Bond (Roger Moore) had presumed dead just because he fell out of a plane. Guess what, he wasn’t.

The ultimate twist comes only in the final climax. Bond stands over Dr Tikka with a kebab skewer to his neck, as a teary-eyed M makes an entry, imploring him not to kill his own ‘father’! You see, Bond isn’t an orphan; the folks who died in a climbing accident when he was a boy (confirmed in GoldenEye) weren’t his parents. Bond is M and Govinda’s love child, a secret they never wanted the world to know.

As the sun sets over the horizon and the camera zooms out, Bond returns home in a paisley-print shirt with mother-of-pearl buttons. M makes aaloo paranthas and a reformed Dr Tikka rules that espionage is no career for a son of his. He wants Bond to become an engineer. As the credits roll (to the sound of Aal Izz Well), you realise that this isn’t just another Bond flick, it’s also the prequel to 3 Idiots—another first for Bollywood.

The plot. Truth be told, when Bond got added to Summit’s list, there were some big fears. Would the studio insist on his getting into character by rehearsing moves from its romantic dance flick Step Up? Would he try to score one up on his amnesiac rival Jason Bourne by playing an agent with anterograde amnesia as a tribute to the studio’s flick Memento? Or would he be a teenybopper—played by Zach Effron or Robert Pattinson?

In the end, they decided in favour of the latter, succinctly turning Bond towards their successful Twilight series for succour. Moviegoers will recall that Bella (Kirsten Stewart) in New Moon must either have her vampire lover Edward sink his jaws into her, turning her into a vampire, or age and die humanly. Stricken by the horror of a wrinkled high-school sweetheart, he crosses the Atlantic and enrols in Cambridge under a new identity.

Anyway, here Edward comes in contact with the MI6, which, when he helps unravel a plot to assassinate a British Royal in his class, sees his special strength (and we aren’t talking about his popularity among the maids), and decides to give him a serum to make him human. The Boy Bond is the story of how Edward Cullen became James Bond. As the movie ends, the young Pattinson is walking to his first Aston Martin wearing his first tux… as he sits inside, he adjusts the rear-view mirror, and you see his reflection—as Daniel Craig.

The plot. It might not look it, but this was one helluva strange pairing. When you have a studio which holds franchises as successful as the lightsaber-wielding Jedis (Star Wars), human-encaging apes (Planet of the Apes) and giant-bird soulmating bluebodies (Avatar), sartorial conflicts were bound to happen. The franchises may have bust boxes all the way to Pandora, but they’re hardly dressed to be on the cover of GQ, like Bond always is. Thankfully, they remembered The Devil Wears Prada.

This is Bond being as close to the original franchise as can be. He drives the cars he should—Aston Martins. He gets Tom Ford to tailor his suits. And wears only La Perla swimming briefs. The dressed-to-kill super spy who protects Her Majesty’s interests without losing a cuff-link takes his sartorial sensibilities to another level in Paris SS 2011.

As the curtain lifts, Bond finds himself an instructor at MI6’s new finishing school. There is talk of him hosting a show called The World’s Best Dressed Spy; he’s even contemplating his own clothing line, and all this while giving instructions in combat without a rumple in his $5,000 jacket.

But things aren’t as good as they were in the first 15 seconds—the posh exterior of fashion masks a sordid reality. Mr White, who escaped from MI6 custody in Quantum of Solace, now plans to colour the entire world’s Spring Summer Collections white. The reality begins to sink in—if fashion did not come up with a new trend, it would unleash free thought. The effects would be catastrophic, plus Bond doesn’t want to dress like that Indian actor he saw in the curry place. The climax happens backstage at a fashion show, as models in buff-coloured thongs and smiles look on.