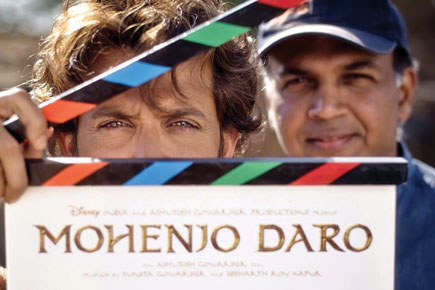 After looking through scores of release plans, these are the movies we are most excited about. Apart from the ones listed, we will also get to watch Vishal Bhardwaj’s Rangoon, a period romance set in World War II inspired by Casablanca, pitting Kangana Ranaut against Saif Ali Khan and Shahid Kapoor. Next year will also see the return of Rakeysh Omprakash Mehra with Mirzya, a love story with four newcomers, and Aditya Chopra shedding his angst-in-love baggage for a light-hearted romance in Befikre.

Do we need yet another retelling of Charles Dickens’ Great Expectations? But if you set it in Kashmir, then we’re in business. Fitoor director Abhishek Kapoor with his last film Kai Po Che proved that he is equal to handling a grownup story despite his debut film Rock On!! being about spoilt boys who refuse to give up their college dreams. Incidentally, the sequel to that movie will also

release next year. Did we mention, by the way, that Katrina Kaif plays Estella, a role that is likely to fit the icy queen like a glove?

For aeons and aeons we have waited for this, for Shah Rukh Khan to stop being a Khan vehicle of dud movies that make several hundred crore. We have waited for SRK to instead reclaim some of his cool cred. Raees brings alive that hope. Let’s look at all the pluses. Set in the 1980s, it is the story of a wicked bootlegger in the backdrop of prohibition in Gujarat. In the trailer, SRK nails it with his edgy bootlegger look. The film is directed by the underrated but talented Rahul Dholakia. If you’re still not sold, then check out this intriguing tagline: ‘Baniya ka dimaag, aur Miyanbhai ki daring’.

MOHENJO DARO: LOVE IN THE TIME OF HARAPPA

Ashutosh Gowariker is quite capable of delivering turkeys. Ask those who have tried watching What’s Your Rashee? and felt every hair on their head turn grey in a movie that drags on longer than a Scandinavian winter. Sometimes, though, Gowariker can give us movie magic that is impossible to surpass. Lagaan, Swades and Jodhaa Akbar are examples of his Jekyll-Hyde complex as a filmmaker. Mohenjo Daro is likely to bring out all his strengths as a director of mainstream historicals that are both entertaining and erudite. A love story set in the Harappan Civilisation, it was oddly enough shot largely in South Africa. Apparently, Hrithik Roshan is in full work-out mode for the film, and is likely to turn the Harappan Man into the new pin-up.

It was only a matter of time before the drug abuse crisis in Punjab caught the fancy of a filmmaker. Fortunately, it is someone who can be trusted to tackle it with sensitivity and smarts. Abhishek Chaubey, the erstwhile protégé of Vishal Bhardwaj, has delivered two clever films in the past, Ishqiya and Dedh Ishqiya, the latter being the only mainstream Bollywood film to have explored lesbian love. Udta Punjab will bring together Shahid Kapoor and Kareena Kapoor after all these years and the tabloids cannot get over that. If there is a love track, it will be between Shahid and Alia Bhatt, who, believe it or not, will play a daily-wage migrant from Bihar. For a film that sets out to be gritty and realistic, the adorable but privileged Alia as a Bihari migrant would demand a leap of faith.

Until Bahubali, Indian audiences had never seen homegrown fantasy fiction. But along it came and gave us our very own Game of Thrones meets LOTR meets South Indian camp. The most thrilling part of the film was its ending, where it was revealed that there will be a sequel. And so we will have, next year. The trailer for the sequel makes it seem even more visually spectacular than the first. Hopefully there’ll be less sexism and women will be more than just props, in which case we’ve got ourselves a movie date.

Karan Johar’s true calling in life is sitting on the couch and shooting the breeze with egotistic stars. When he’s on a break from that, and living his seemingly fabulous life, he sometimes goes back to his roots as a director. The results of that are usually mixed. But Karan Johar is difficult to resist. And so this movie will generate a fair amount of buzz. It’s a story of love and heartbreak, and between Ranbir Kapoor and Fawad Khan, rest assured that the entire female populace will be watching it.

Sometimes the pre-publicity of a film can be its biggest buzz kill. A lot of unnecessary factoids surround this movie, such as Katrina Kaif learning the Israeli martial art form of Krav Manga. Also leaked is information that the lead couple have been constantly squabbling on the sets, and that the director cannot make up his mind about the film and keeps delaying it. If we keep all this aside, then we get Anurag Basu and Ranbir Kapoor teaming up again after Barfi! and that’s reason enough to have faith in this detective yarn.

DECEMBER 2016
DANGAL: THE AGEING OF A KHAN

For moviegoers in India, a year is only complete when all three Khans release films. 2015 had Aamir Khan sit it out. The weight he has gained is no mid-life crisis, but Aamir sinking his teeth into a role that requires him to resemble a sturdy tree trunk. No complaints, though. This will be the first time that a Khan faces up to his actual age. He will play Mahavir Phogat, the father of wrestlers Geeta and Babita. Like SRK and Raees, this could be Aamir’s moment of reckoning.