The cultural revival of Modernist architecture 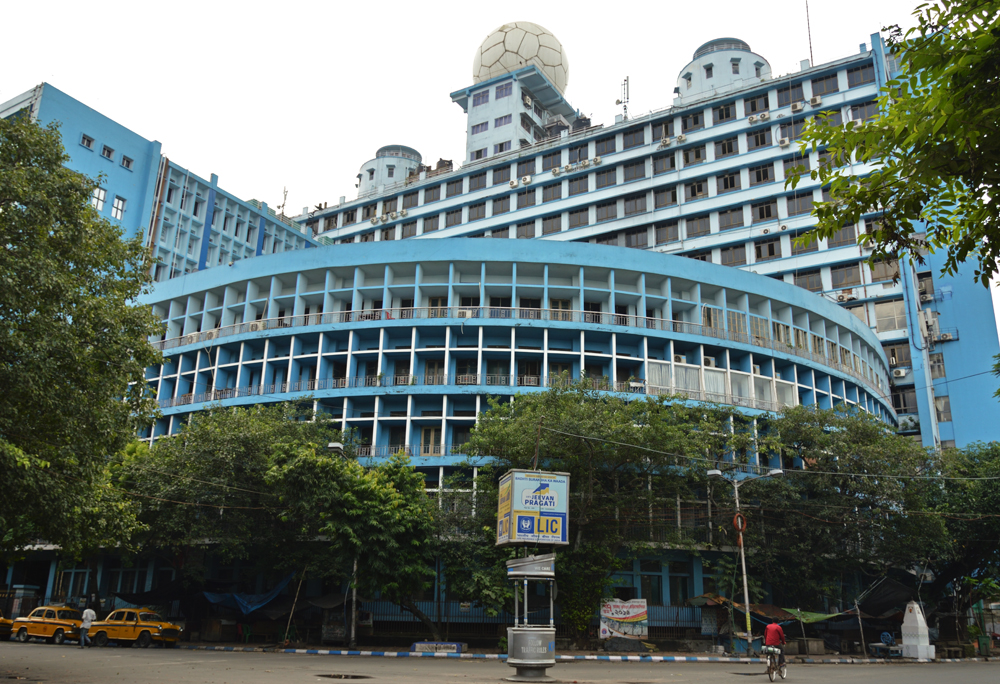 
IN 2016, INTACH’s Delhi Chapter petitioned the Delhi High Court to confer heritage status on 62 buildings built post-independence, such as the Supreme Court (1958) and the recently demolished Hall of Industries and Nations (1972) and Nehru Pavilion (1972) at Pragati Maidan. The buildings on the list enjoyed no legal protection and INTACH, a heritage conservation body, argued for their preservation on the grounds that these structures are intrinsic to modern India’s identity.

Modern architecture, born in the early twentieth century, received a boost after 1945 when its modularity became useful during post-war reconstruction. With Indian independence coming so close on the heels of the end of the war, modernism and its variant, brutalism—expressed through a language of raw, concrete surfaces and massy volumes—became key to nation-building and synonymous with Nehruvian values and the socialist welfare state. Brutalism was immortalised in the design of Chandigarh, credited to the style’s most famous pioneer Le Corbusier.

Both modernism and brutalism gave way to postmodernism towards the late 1980s, an undefined style that accommodated the flashy, the kitschy, historical symbolism and several others under its broad umbrella. Economic liberalisation and a mushrooming real estate market further snuffed out modernism and brutalism, and led to an architecture marked by capital, as seen in the ubiquitous skyscraper.

The INTACH petition in 2016 was one example of the growing cultural revival of modernism, but not the only one. The same year the NGMA, Mumbai hosted The State of Architecture: Practices and Processes in India that emphasised the role of the state in architectural production after independence, and Nehru’s embrace of modernism. In 2017 the film Nostalgia for the Future by architect-filmmaker duo Rohan Shivkumar and Avijit Mukul Kishore dwelt on the intersection between architecture, nation-building and modernity. In April this year, a student launched the Brutal Delhi page—a photographic documentation of the city’s brutalist monoliths. And last month architecture practice Matter curated the conclave Modern Heritage in Goa.

These are just a handful of examples of exhibitions, talks, social media pages and artistic productions highlighting the growing interest in India’s modernist movement.

Several factors are driving these attempts at preserving, documenting or reminiscing fondly over it, including a longing for socialist values, general government apathy towards preservation and a response to the majoritarian government. The interest is concurrent with the global rhapsodising over what are lovingly being called Concrete Monsters.

MUCH OF THE architectural throwback focuses on the socialist ideals of the newly independent state. In The State of Architecture: Practices and Processes in India exhibition, curators Rahul Mehrotra, Ranjit Hoskote and Kaiwan Mehta highlighted the role of the state in building and how the Nehruvian socialist imagination translated into architecture.

Wittily playing on ‘state’ and loosely slotting Indian architecture into categories from independence to the present day, the exhibition—though largely neutral in tone—made clear that the tie between politics and architecture was most fruitful during the post-independence years when leaders and architects worked together to convert statist vision into built form. This link progressively weakened over time.


“Values like frugality, the economy of space and material, civic dignity and social responsibility were central to this body of work,” says Ruturaj Parikh, architect and director of Matter, that hosted the Modern Heritage conference in Goa. “Going much beyond the visual and aesthetic indulgences that most of our contemporary architecture seems to be pointlessly engaged with, post-independence modernism in India dealt with issues like housing, public buildings, institutional campuses and cultural projects. This is the intrinsic value of this work.”

The film Nostalgia for the Future (2017) is more explicit in its approach when expressing a yearning for socialist values through the sweetness of architectural memory. With its black-and-white montages, doses of Nehruvian voiceover and camera shots following the first prime minister on his cavalcade around virgin Chandigarh land, it shows something of a longing for what could have been the future of India. “The building is not merely an object. It represents the desire for an ideal life. The nostalgia for the future is the nostalgia for the hope that that object represented, the value system embedded in that object,” says Shivkumar, who is also Dean of Research and Academic Development at the Kamla Raheja Vidyanidhi Institute for Architecture, Mumbai.

Shivkumar and Kishore’s second film Lovely Villa (2019) too, touches on the theme of a nation’s identity and its entanglement with modernism, this time in a more autobiographical format. The film chronicles Shivkumar’s childhood and youth in the Charles Correa-designed LIC Colony, Mumbai, a complex conceived through the government’s second five-year plan in 1956.

In 2017 the Delhi High Court ruled that the two structures at Pragati Maidan were less than 60 years old and therefore could not count as ‘heritage’, clearing the decks for their demolition. IIT Delhi’s academic block and the Chanakya Cinema Hall in Chanakyapuri met a similar fate, and the latest to join the endangered list is Charles Correa-designed Kala Academy in Goa. With demolition becoming more common, spurred on by the lack of political will and absence of legal protections, the outcry for preservation has grown louder.

“We are witnessing a time where these defenceless structures may not endure our neglect and lack of consensus on the urgency for a framework within which they will be protected and cared for,” says Parikh. His firm is building a country-wide database of modernist structures—which include Golconde House, Pondicherry and New Secretariat, Kolkata—to help push for their preservation.

“We truly believe that these structures symbolise India and the spirit of our nation. We must, therefore, build political will to protect these buildings,” says Parikh.

INTACH put it more vociferously in their petition, mentioning a ‘complete abdication of responsibility by [Heritage Conservation Committee], [Delhi Urban Art Commission] and other agencies in not taking steps to protect contemporary architectural heritage of Delhi, despite having cogent reasons to do so’.

SINCE MODERNISM and brutalism in India are ineluctably bound with nation-building, in some cases the wistful turn to the past can be seen as a reaction to the current right wing political climate. Prime Minister Modi’s Nehru-bashing is encouraging some to toast Nehru, through architectural memorialising.

The Hall of Industries and Nations—built to mark the nation’s 25th anniversary—and the Nehru Pavilion, both at Pragati Maidan, Delhi were examples of brutalism and were annihilated in 2017. Their swift conversion to rubble outraged the architecture community and also took on a political colour, exposing the battlefield that modernist heritage has become.

Photographer-curator Ram Rahman, whose architect father Habib Rahman worked closely with Nehru post-independence, created tongue-in-cheek photo-edited images of the buildings in response to an art call-out and denounced the razure. “[…] I have been saying that the only way to save modern buildings is to turn them into religious sites,” he told Indian Express in 2017. “So I thought of placing the Ram Mandir on top of the Hall of Nations, then nobody would dare to touch it.” In similar photographic acrobatics, he placed the Sardar Patel statue—another product of the BJP’s nationalist muscle-flexing—on top of the Nehru Pavilion. Such juxtaposition sent out a message: the current government is waging architectural war against certain symbols of post-independence legacy and facing resistance from some quarters as a result.

India’s official rupture with socialism, with the liberalisation of the economy in 1991 started its descent into capital-driven architecture, as seen from the rash of steel and glass skyscrapers choking the horizons of Indian cities. Such construction, together with Indian postmodernism in architecture, started to gain prominence.

Postmodernism departed from modernism’s austerity and homogeneity, favouring a varied aesthetic including the use of vernacular symbols, historical elements and ornamentation. Rather than offering a single new direction, it consisted of disparate movements and coincided with the rush of money from India’s economic reforms. With a growing real estate market, architecture began to emerge from an ideological vacuum, and buildings became physical sites for the accumulation of capital—what David Harvey called the ‘spatial fix’.

“There definitely is an interest [in brutalism or modernism or socialist architecture] and part of that interest is of course the fact that you don’t see that kind of architecture anymore,” says Shivkumar. “Because I think that the forces that are shaping our cities today are considerably different than those that were imagining those sorts of architectures. So I think there is in some ways a longing for that idea that architecture can actually participate in the making of a society, rather than simply following what right now commerce seems to be dictating.”

That commerce is dictating current urban development also came through in architect Romi Khosla’s 2014 lecture The New Metropolis: Nehru & the Aftermath. Here the architect clubbed “Smart Cities and Modi’s Vision” against “Chandigarh and Nehru’s Vision”. Khosla’s scepticism of Smart Cities and their neoliberal economic concerns as peddled by the government (and fleshed out by McInsey), went hand in hand with a celebration of socialism as enshrined in Chandigarh. He asserted that it was not about the particular ideological stripes of the ruling party— “any government that would have come to power would have loved [Smart Cities]” —but about a future in which “corporations provide finance, policy guidance and political options”.

In other ways too, corporations have cottoned on to the architecture’s growing appeal, the fetishisation and commodification of brutalism as seen in Asian Paints’ launch of ‘Archi Concrete’ in 2018. This acrylic-based paste promises a ‘raw’, exposed effect’ to the surface it is applied on, offers ‘an aesthetic of minimalism and modernity’ and has been patronised by no less than one of the founding fathers of Indian architectural modernism, BV Doshi.

Whether theoretical interest in post-independence raw concrete will translate to some form of neo-brutalism by contemporary architects and designers remains to be seen.

The Indian trend plugs into the rousing global eulogies to these chunks of concrete from the post-war period. What began as an online archive of Brutalist buildings in Germany last year, SOSBrutalism spawned a full-fledged exhibition at the Deutsches Architekturmuseum, Frankfurt, followed by one at the Architekturzentrum Wien, Vienna. “Rettet die Betonmonster” or “Save the Concrete Monsters” goes their clarion call.

Much like the buildings they pay tribute to, initiatives are taking root all over the world. In 2017, The Green Box (Berlin) published Socialist Architecture—The Reappearing Act, and in 2018, Phaidon (London) published Atlas of Brutalist Architecture. The same year New York’s MoMA came out with Toward a Concrete Utopia: Architecture in Yugoslavia, 1948–1980, a book and exhibition on Yugoslavian Brutalism. These efforts are complemented by the social media cottage industry of pages like Socialist Modernism and BRUTGroup.

“In addition to aesthetic fascination, I think a political theme is also important: many Brutalist buildings were built in the 1960s and 1970s as public infrastructures, such as theatres or public swimming pools,” says Angelika Fitz, director of Architekturzentrum Wien, one of the first to contribute to the revival of Brutalism with their exhibition Soviet Modernism 1955-1991 in 2012.  “These are precisely the infrastructures that are shut down in times of austerity politics and neoliberalism. The interest in Brutalism therefore shows not only nostalgia, but also a longing for new forms of collectivity.”

The political theme is taken a step further by Shivkumar, who puts it bluntly, “I’m trying to reconcile the sharp rightward turn that a lot of governments across the world have taken, and this interest among the intellectual elite, as a nostalgia. So is there a nostalgia for a certain kind of imagination of society that is embedded in a nostalgia for that kind of architecture?”

Maitri Dore
Maitri Dore is an architect, urban researcher and PhD candidate at the Department of Conservation, University of Gothenburg