The best sports biopics often focus not on the sport, but the unseen characteristics intrinsic to it. That’s what Azhar gets wrong 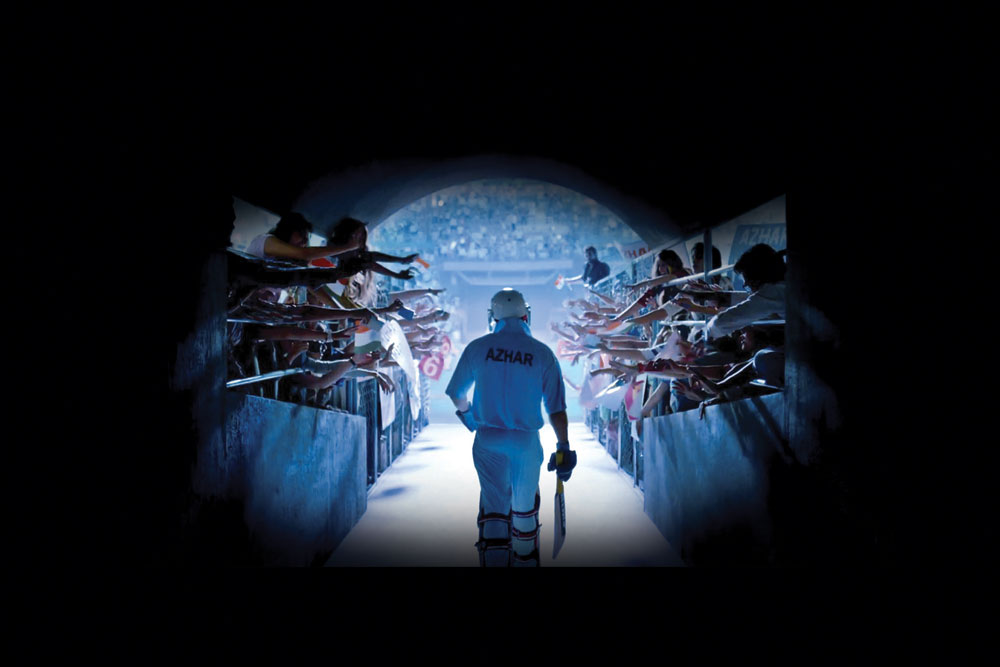 GROWING UP IN the 1990s, it was hard not to be beguiled by the gifts that Indian cricketer and captain Mohammad Azharuddin was blessed with. He was a batsman of silken grace, who often made the ridiculous look simple. He was also, as it happened, a character of some intrigue. He rose from a humble background to phenomenal heights before crashing down in a wave of ignominy. Even today, more than a decade since the allegations of his tryst with match fixers first surfaced, we, especially those of us for whom Azhar was an icon, feel betrayed. How, we wonder, could a player of such preternatural ability fall prey to the gravest of sporting sins?

Tony D’Souza’s new film, Azhar, it was believed, might help unravel this enigma. But, as it turns out, the film is not only benign, but virtually serves as a hagiography of Azhar’s life. Much like the sportsman that it portrays, there’s little that’s honest about it. It seeks to paint a picture of Azharuddin as a misunderstood, and sometimes even wronged, cricketer. In the process, all we get are homilies from our characters, Azhar included. We learn very little about who Azhar was, how it was that he became India’s captain, and why, if indeed he took money to throw matches, did he do it. We learn nothing about how cricket, a sport of supposed high culture, had metamorphosed into a colossal moneymaking machine in the 1990s, at the core of which Azhar often found himself. Even the cricket scenes, which the film fortunately underplays, are wrought to the point of being cartoonish. In one of the earliest shots in the film, Azhar, played by Emraan Hashmi who scarcely resembles the cricketer, takes guard at the Chinnaswamy Stadium in Bangalore. The arena looks crude, the fans distorted, and the bowler with ball in hand is a far cry from the menacing Allan Donald that he is projected to be.

Azhar the film, though, is one of the many biopics on sportspersons and sports teams that Indian cinema has seen of late. Chak De! India (2007), which was based on the women’s hockey team that won a gold medal at the 2002 Commonwealth Games, Bhaag Milkha Bhaag (2013) on the athlete Milkha Singh, and Mary Kom (2014), on the boxer Mary Kom, were each successful at the box office and have given filmmakers a pattern to work with. If these movies made on somewhat left-field sports can be successful, the thought was that such a film on cricket could also work. This is probably the reason why Azhar came to be made, and why Neeraj Pandey’s MS Dhoni: The Untold Story is in the works. But box office success, as we know, doesn’t always depend on making a good film.

With most biopics, the story already exists; it merely requires adaptation to the big screen. Additionally, with sports biopics, the story is invariably thrilling; it has an inherent tension to it. After all, it is the narrative arc that is essential to sport that makes it alluring. What’s more, most sports stars have overcome great odds. But to tell these tales through a medium such as cinema can be a tricky exercise. For one, recapturing action is not simple. When asked about whether he was interested in making a biopic on his late father, the former Indian cricket captain MAK Pataudi, Saif Ali Khan recently said, “It’s difficult to play sports on screen convincingly.” Pataudi, Khan added, “was a stylish batsman; now how can you imitate that?”

One way to overcome this difficulty is to use original footage as Asif Kapadia did in his splendid biopic Senna (2010) on the racing driver Ayrton Senna. The resolution of these videos was low given that they were shot in the 1980s and the 1990s, but by editing and using shots taken from Senna’s cockpit, Kapadia created a sense of action, often stunning in its final execution. In the scenes leading up to Senna’s fatal crash at the 1994 San Marino Grand Prix in Imola, Italy, you can feel the chill reaching your bones. This would have been impossible to replicate without the use of official material.

The other problem with making a sports biopic is the fact that the subject’s larger story is often already well known, and is embedded in public consciousness. To make it watchable, therefore, for both the sports and the non-sports fan alike requires an element of invention. What we need is a screenplay that can show us (as opposed to merely telling us) who the sportsperson concerned is, what the sport is like, and why his or her story might be worth recounting. Once again, it’s a racing movie that serves as a fine template.

In Ron Howard’s Rush (2013), which depicts the lives of Niki Lauda and James Hunt, two scenes impress on our minds the nature of Formula 1 in the 1970s and the personalities of the pair whose rivalry was at the centre of this premier sport. In the first, the devilishly handsome and flaxen-haired Hunt, played by Chris Hemsworth, struts into a hospital with a bloodied nose, thanks to a “friendly disagreement with another driver”, over the driver’s wife. “I have a theory about why women like racing drivers,” Hunt says, on voiceover, as he makes love with the pretty nurse who was attending to him, “It’s not because they respect what we do… It’s our closeness to death.”

In the second scene, later into the film, the easily snippy Austrian Lauda, strikingly opposed to Hunt in mannerism and appearance, having just signed for Ferrari, meets his future wife, the eye-catching Marlene Knaus played by Alexandra Maria Lara. Their meeting is one of happenstance. Having been shut out of a party in the middle of a quaint Italian village, Lauda, played superbly by Daniel Bruhl, finds himself ride-less. So he seeks a lift to the nearest station from Knaus, who has just come out of the party, hosted by her ex-boyfriend, in a state of mild ire. She has little idea who Lauda might be, but accedes to his request anyway.

Midway through their drive, Lauda, gruff in gesture, suggests that the car might have a problem. “You don’t know what you’re talking about,” Knaus says. But true to his prediction, her vehicle soon comes to a scratching halt. After Lauda’s first effort at finding them a new lift is foiled, Knaus offers her hand; “Let me do this,” she says, “otherwise we’ll never get out of here. We’re in Italy after all.” Soon, a small car brakes, and out come two bumbling blokes. But it isn’t Knaus that the Italians are interested in. Stepping past her, one of them asks Lauda, “Excuse me, are you Niki Lauda, by any chance?” “Yes,” he says, only to be met by a chorus of excitement. “My car is your car,” the other tells him. But on one condition: that Lauda drives it. Through the course of their drive, even as the Italian car-owners can barely contain their delight, Knaus wonders aloud: “Who are you? Should I know you?” “What you don’t know, he’s Niki Lauda, Formula 1 driver, he just signed with Ferrari!” “Him?” she asks, bemused. “Impossible…Formula 1 drivers, they have long hair, are sexy, their shirts are open… Anyway look at the way he’s driving, like an old man.”

“There’s no need to drive fast,” Lauda replies stoically. “Just increases the percentage of risk. We’re not in a hurry. I’m not being paid. Right now, it’s zero incentive for reward. Why would I drive fast?” Knaus, leaning in, says, “Because I’m asking you to.” This, naturally, prompts Lauda into action. A quick flick of the manual transmission gearbox, and off the car goes on a whirlwind drive at a nerve- wracking pace. Marlene is smitten.

Thus, in two sequences of less than five minutes each, one directed at Hunt and the other at Lauda, we get to know not only of the divergent personalities of the two drivers, but also of the fandom that their sport triggered. Throughout Rush, the sport remains in the background. We learn of the rivalry between Hunt and Lauda from the pattern of their lives, from their struggles, both physical and emotional. The result is a viscerally beautiful movie that appeals to not only racing fans but even to those who see the sport as a spectacle in monotony.

The best sports biopics often focus not on the game itself, but on the unseen characteristics intrinsic to sport. These features are sometimes not immediately apparent even to a regular sports watcher. For instance, The Damned United (2009) takes a period in Brian Clough’s career as football manager and presents it to us in vivid detail; it matters little if we know who Clough is. The film though, as The New York Times’ AO Scott wrote, is ‘a rare sports movie that deals with humiliation and disappointment.’ Like Senna, The Damned United uses archival footage to embellish the on-pitch action; but at the heart of it is Clough, a man riddled with insecurities and yet burning with passion, played marvellously by Michael Sheen.

There have been several other examples of well-made sports biopics. The Fighter (2010), David O Russell’s searching drama on the 1990s welterweight boxer Micky Ward; Michael Mann’s Ali (2001) where Will Smith plays Muhammad Ali; and Moneyball (2011), which stars Brad Pitt as Oakland Athletics boss Billy Beane, who put together a fine baseball team on a paltry budget, and is impressive in its scope and depth. But possibly the finest model of this oeuvre (or, for that matter, of any biopic) is Martin Scorcese’s Raging Bull. Released in 1980, it stars Robert de Niro in a career-defining role as boxer Jake LaMotta. While illuminating so many different themes—which are as much about life as they are about the sport— the film also shows us how a single trait can often come to define a man: in this case, a remarkable obsession in his own distrust of those around him causes LaMotta, as Roger Ebert wrote, to release ‘his jealousy in violence’.

As a body of work, the sports biopic, especially in Indian cinema, has only now begun to flourish. While some films have been successful at the box office, almost all have flattered to deceive. To compare them to cinema from the West might seem unfair. But when we see Azharuddin’s story, which has every bit of drama—or maybe even more—than was present in LaMotta’s or Clough’s, we can’t help but feel disappointed. It’s a matter of shame that D’Souza’s film barely scratches the surface of the tension wrapped around Azhar’s life. Perhaps one day we’ll get a better showing—one that informs us how and where cricket went amiss, and one that transcends the sport to reveal the real Azhar.