New research claims that even more than our genes, it is our bacterial composition that determines our health. And our happiness and moods 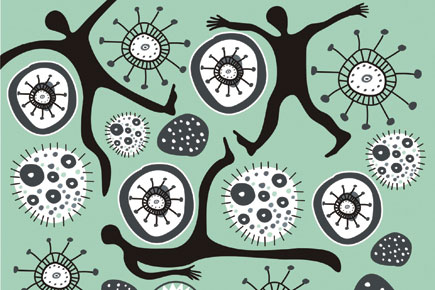 New research claims that even more than our genes, it is our bacterial composition that determines our health. And our happiness and moods

The fever was so high that my fingers started tingling. Waves of nausea washed over me. The antibiotics in my stomach would soon be expelled, along with the few spoonfuls of khichdi I managed to stomach. Okay. Time to go to the hospital.

My body was being held hostage by a recalcitrant bacterium: Salmonella enterica enterica, serotype Typhi. Put simply, I had typhoid fever.

It was mid-August, Delhi. The weather was still hot and clammy, but I was chilled to the bone, even with the fan switched off. At the hospital, the doctor stated the obvious: my body was not responding to antibiotics. After three days of medication, my fever had only climbed higher. The doctor noted matter-of-factly that he had seen several cases like this recently, with patients not responding to oral antibiotics. It was time to step things up, and start delivering antibiotics directly into my bloodstream.

Chained to an intravenous drip for 24 hours, watching the light change outside the hospital bed window, listening to a sudden rainstorm pour down, I had plenty of time for reflection. About the monsoon, which brought agricultural fields to life but spread disease across overcrowded cities. About the miracles of modern medicine, and its terrors. It was unnerving to watch a full bag of fluids empty slowly, ineluctably, knowing that all these fluids were flowing into my body.

Soon, though, the mysterious fluids began to work their magic. There were signs of transformation: the purifying sweat that accompanies a fever dropping; the relief of being able to sip a cup of milky chai without gagging. I was lucky, at least, to be suffering an illness that responded to a straightforward treatment: bacteria, meet antibiotics. The monsoon had also brought a dengue epidemic, caused by a virus that does not respond to any known medications.

Viruses are generally much more difficult to treat than bacteria. Despite the existence of some vaccines and antiviral medications, the vast majority of viral diseases cannot be countered directly by medicine, and must just be waited out. This doesn’t stop doctors from treating viral diseases with antibiotics, in part just to look like they are doing something, in part because patients have come to expect it. This is certainly the case in Delhi; in my limited experience, the doctors here give out antibiotics like candy. But the same is true in my home country, the United States, where one-third of all patients seeking treatment for the common cold—that quintessential viral disease—are given prescriptions for antibiotics.

The over-prescription of antibiotics is, by now, a well-known issue. The problem is that bacteria are nimble, quick-evolving creatures, and when given ample opportunity to interact with antibiotics, they will inevitably evolve to become antibiotic-resistant. This is especially true when people don’t take their full dosage of antibiotics, which results in killing some bacteria, leaving the strongest alive: a perfect scenario for the development of antibiotic-resistant bacteria. This is not a new problem; penicillin, the first antibiotic, was discovered in 1928, and penicillin-resistant bacteria had already developed by 1940. With the widespread use of antibiotics around the world, the problem is quickly worsening, and many wonder if it will spiral out of control. Some warn that, soon, antibiotics will cease being effective.

In a recent article for the American science and technology magazine Wired, Maryn McKenna, who describes herself as ‘strangely excited’ by emerging diseases, details what would happen in a ‘post-antibiotic era’, when bacteria finally outsmart all available antibiotics. Some of the consequences McKenna lists are truly shocking: difficulty in treating traumatic accidents and ensuring safe childbirth, the inability to effectively treat cancer or perform organ transplants since these procedures require suppressing the immune system and opening up the body to bacterial diseases, and, of course, much higher fatality rates from diseases like, say, typhoid fever.

But some of the other consequences McKenna lists don’t sound so dire. For instance, McKenna points to the use of massive amounts of antibiotics in factory farms in the US, which allow farmers to cram animals into inhumanely small living spaces. In a post-antibiotic age, meat in countries like the US would become more expensive and the animals would have to be given more spacious, comfortable living conditions. Is this such bad news for countries like America, where people already eat an unhealthy amount of meat and treat their farm animals abysmally?

Let me be clear. I am not pining for a post-antibiotic age. But McKenna’s alarmist approach is limited, as is evident in her apparent nonchalance towards the evils of factory farming.

McKenna herself recognises that the overuse of antibiotics, both in medicine and in agriculture, is a problem, and in another article, she points to successful regulations to curb this abuse in northern European countries (as opposed to the asinine Free Market approach in the US, which simply involves asking farmers and doctors to behave better, and has been remarkably unsuccessful). But McKenna still sees antibiotics as the weapon, and bacteria as the enemy; she merely advocates a more judicious use of this weapon.

Her articles are largely based on interviews with allopathic doctors, who have, on the whole, viewed bacteria as evil beings to be crushed by the force of antibiotics. The downsides of this kind of ‘shock and awe’ approach to bacteria have become clearer in recent years. Of course, there is the overuse that McKenna rightly criticises. Further, the sheer, overwhelming power of antibiotics makes it possible to do things that, all things considered, may not be so wise: packing cattle into painfully tight spaces, say, or performing elective surgeries like liposuction.

A more nuanced approach to bacteria is emerging, which doesn’t see antibiotics as a cure-all. Antibiotics have long been criticised by countercultural health movements, and the Kambucha (fermented tea) craze in the United States shows the widespread popularity of probiotics. But this emphasis on the potential positives of bacteria, which used to be a fringe view, is now finding widespread acceptance within the Western medical community. As quote misattributed to Gandhi says, ‘First they ignore you, then they laugh at you, then they fight you, then you win.’ Top medical schools around the world are now conducting research meant to showcase bacteria’s complexity.

This more nuanced approach to bacteria takes a more historic view, or—more accurately—a prehistoric view. Bacteria is beyond primitive; this group of organisms is almost unimaginably old. Modern-day bacteria are close relatives of the very first organisms that came into existence: single-celled, nucleus-less creatures that emerged four billion years ago. Bacteria have survived and thrived in just about every place on earth: deep in the sea, in the soil, in hot springs, even in radioactive waste. And, of course, in human beings. Bacteria and humans have coexisted for as long as the human race has existed. In the human body, bacteria cells outnumber human cells by a ratio of ten to one. If all bacteria were just harmful germs, we would all be dead.

Instead, bacteria have had a largely symbiotic relationship with humans. Without bacteria, we wouldn’t be able to digest our food, or manufacture certain vitamins, or ward off various illnesses. In this more balanced view, bacteria like Salmonella enterica enteric should be treated as rogue operatives, not as representatives of their entire biological kingdom. (Side note: should we really still be using such patriarchal, authoritarian language for biological classifications?) There are about a hundred trillion bacteria within a single human body, and most of them are good guys, so to speak. Besides this, there’s the crucial work that bacteria do in soil, recycling nutrients and ensuring that the land is fertile. Humans depend on bacteria in more ways than one.

Researchers are just beginning to comprehend the fundamental role that bacteria play in human health. Some doctors now claim that, even more than our genes, it is our bacterial composition that determines our health. Scientists have a fancy name for all the bacteria that populate the body: the human microbiome. Understanding this microbiome is an complex task, akin to analysing a complex ecosystem. In fact, writers like Michael Pollan have urged us to view our own bodies in just this way—as diverse ecosystems in which bacteria may be the biggest player.

In this human ecosystem, bacteria have an impact not just on physical health, but also on our moods and mental dispositions. Studies have shown that intriguing things can happen when you transfer bacteria from one organism to another. In one especially surprising experiment, bacteria from the guts of adventurous mice were transferred into the guts of more timid mice. Lo and behold, these mice became bolder and more active.

Unsurprisingly, with the ever-growing use of antibiotics, the human microbiome has become considerably less diverse, much like the modern monocultures of industrial farming. Medical researchers speculate that this loss of diversity may be contributing to the rapid rise of chronic conditions like asthma, Type 1 diabetes, sinusitis and obesity. People in more isolated, less industrialised communities today still have a much more diverse microbiome than their urban, high-tech counterparts.

Already, doctors are trying to find a way to apply these findings. One microbiologist, a pioneer in the field, dreams of the day when we can give young children an implantation of bacteria to give their microbiomes the proper diversity, then give them antibiotics at a later age to cull the unnecessary bacteria. Perhaps, such internal ‘ecosystem services’ will one day be possible for the human body, but researchers and doctors should not make the mistake of their antibiotic-pushing predecessors. Modern science has often underestimated the complexity of ecosystems–both external and internal–and has acted with considerable hubris while destroying diversity in pursuit of its goals.

The answer is not neo-primitivism—abandoning antibiotics and other technologies that have had tremendous benefits for humankind. Rather, it is to recognise that these technologies have their dark sides. Relatively new scientific fields, including ecology and bacteriology, have demonstrated the remarkable complexity and interrelated nature of life on earth. Making changes to one part of an ecosystem, whether it is in a forest or in human guts, will likely have myriad unintended consequences. This calls for humility in dealing with organisms who have been around billions of years longer than us—not for bacteria’s sake, but for our own. If, as some environmentalists predict, humans cause catastrophic changes that result in the end of human existence, we can be sure that bacteria will survive the apocalypse.

As I type this, my nose is overflowing with mucous and a dry cough is distracting me from my work. I am suffering a common cold. But I am not taking antibiotics. I’ve learned too much about the trillions of friends living inside me, and I don’t want to unleash a cyclone on my inner ecosystem.