A Useless Quest for Deeper Meaning 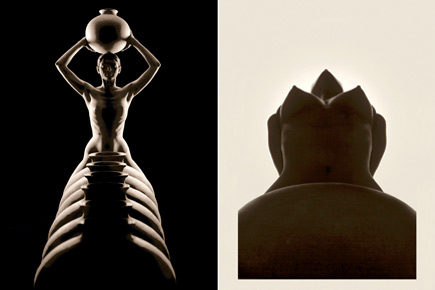 
Under normal circumstances, an art show featuring women and pots results in memories of teachers with big bindis explaining abstract concepts in the sort of stilted language that would earn them a ‘D’ from their peers in the English department. The first panel at Bandeep Singh’s photographic exhibition is, therefore, discouraging because it lays out, pretty thickly, what lies ahead. ‘Placing a pot on top of another revealed a primal shape,’ he writes. ‘It created a double helix which represented DNA…’ This is the basic shape of the vertebrae, he goes on, which is interesting because ‘the Kundalini which is coiled at the base of the spine unfolds along an 8-shaped intersecting path.’ 8, it turns out, also denotes infinity.

The jury is out on whether this kind of mystic free-association was written to educate you or test your will to live.

Which is strange, because, words aside, Singh’s exhibition of 33 stark photographs taken over eight years, called Gaia’s Song, is extraordinary. In one, six large earthen pots echo down from a woman’s pelvis as she carries a seventh on her head. Unfamiliar with the Deeper Meaning of it, here’s how I connected with it. At first, nothing. Then it looked like a lung. And then a spine. Life. Support. Oh. But it was my connection to make.

Carving light out of the darkness, Singh turns pots into a skeletal frame. He transforms a woman’s body, from head to toe, into a spine. He even conjures an animal out of a human body. His primary colours are brown and black. He’s fascinated by negative spaces, the nothingness that fills a frame’s empty spaces. This is particularly evident in a work titled Yantra 2008, which depicts an upturned pot trapped between a woman’s knees. This creates two triangles: one ending at her artfully unlit nether regions, the other between her heels. A panel explains: ‘I wanted to locate the form of the Sri Yantra within the human body. I tried doing it for years but couldn’t locate it… [But when] I was editing the images for [an exhibition] in 2008, I came across this image: two triangular shapes (upward and downward pointing) representing the Purusha (male principle) and Prakriti (feminine principle). If observed carefully, you will see that every space in the image also makes a triangle.’

Singh lives in the world of these concepts, and that’s what drives this enterprise forward. But concepts like this can be confounding in their abstraction, and if accepted, add a heaviness to works whose joy lies in the artist’s light touch. I tried skipping past those bits because they infused everything with meaning, and could have killed what I felt for Singh’s work. Take, for instance, The Lotus Sutra, in which Singh’s subject pushes her dark breasts and face to a light brown sky from above his camera. It’s the first thing your eye will go to on entering the gallery. In another, his model lies upside down with her head close to the camera, and Singh lights up her breasts and oiled collarbones, and softens her shoulders, chin, lips and nose. Every other part of her fades into black. Singh calls this Mythical Bull, and it takes a moment to see, but it’s certainly there, and it is gorgeous.

As I write this, Singh’s strolling around this gallery, his grey hair falling over his face as he explains his art to a modest group who mouth “beautiful” repeatedly. He explains these concepts to them, and they’re buying it; they see what he sees, and now they’re interested enough to return to a piece they had spent time with earlier.

But you don’t need the words, for you don’t need anyone’s words to see how wonderful Singh’s work is, how steady his eye, how hard-earned his craft. In seeing his work, you may not see what he does, but you will find joy.