A Rebuke from Rani 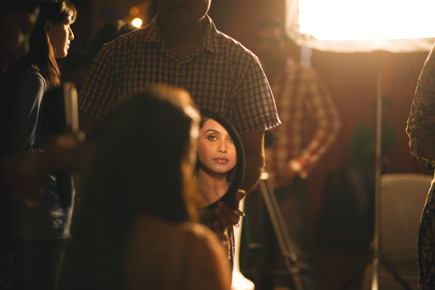 The actress talks about No One Killed Jessica and frets about journalists jumping to conclusions about the real-life inspiration for her TV-anchor role in the movie.


The actress talks about No One Killed Jessica and frets about journalists jumping to conclusions about the real-life inspiration for her TV-anchor role in the movie.

Rani Mukherjee taps a finger on her wrist and asks her colleague, “Time?”

“We have to go now,” her colleague says to me. I have been allotted five minutes to interview Rani after being promised 20. Now I am on my ninth minute. Besides, I have put Rani off a bit with a mention of journalist Barkha Dutt.

A perfunctory ‘last question’ later, Rani takes her tired feet off a chair, where they were placed on parole, and returns them to the confinement of a pair of beige stilettos. As she exits the sea-front patio of the Novotel in Juhu, Mumbai, her assistants walk along. They pass the banquet room, where Rani and Vidya Balan have done interviews the entire afternoon to promote their upcoming film, No One Killed Jessica, and repeatedly used the word kirdaar (role), which we hear only in film interviews. The room is now getting ready for what appears to be a children’s event. A model of a red demon is perched atop the entrance. A sign says, ‘Welcome to the Party.’

Rani, glancing at the festoons, says, “Party’s happening? How sweet.” She walks to another banquet room for another round of interviews.

At the start of my career, I enjoyed an entertaining stint with Star & Style. The perk was free copies of Debonair, our brother publication. On drives in a friend’s car, we would call out to truck drivers and show them the centrespreads. There were also hilarious assignments. Mahesh Anand, the villain, had recently separated from his wife. Hoping to garner sympathy, Mahesh told me that he would celebrate his upcoming birthday alone, with just “candles, me and Mustang (his Doberman).”  Over time, ‘Just me and Mustang’ became a cult phrase among my friends, for its amusing connotations as well as phonetic rhythm. Once, Govinda wanted to hit me for writing about his rumoured affair with Shilpa Shetty.

The chat with Rani is my first personal interaction with a major actor since my Star & Style days. I expect to see prima donna edges and airs. Rani’s patience does snap on occasion. During a television interview, while complimenting the film’s music by the talented Amit Trivedi, she forgets the titles of the songs. She turns to a man called Yogesh. “Yogesh, tell me the songs.” Yogesh is not paying attention. “Yogesh, tell me the songs!”

By and large, though, Rani and Vidya are informal and cooperative. A reporter from Mahua News, a Bhojpuri channel, twice struggles to remember the film’s title. She says, “Film ka naam hai…  No…” and stutters. Vidya says to her, “The next time, look at me. I will prompt you.” At the end of the interview, the two agree to record a personalised message for the channel, complete with its Bhojpuri slogan. The earnestness with which Vidya and Rani do the interviews validates the mantra of new Bollywood—marketing is everything. Their personal assistants never leave their side, fishing out mirrors, pins (to make excess fabric disappear in photographs) and nourishment. Vidya sips from a transparent red sipper. In the evening she has a Parle-G biscuit. Rani has a snack later.

From having up to five or six releases every year, Rani is down to just one release each in 2009 and 2010. As a result, her fans — her firebrand personality and maple syrup eyes have many admirers — eagerly await No One Killed Jessica. It will be on screens in January. The film is about the Jessica Lal murder of 1999. Vidya plays Sabrina Lal, Jessica’s sister. Rani plays Meera Bedi, a truth-seeking TV reporter who likes a smoke and is not averse to using colourful language. When a fellow passenger on a flight tells her he enjoyed her war coverage, she says, “Wahan hote na, to g**** phatke haath me aa jati (minus the untranslatable expletive, ‘Had you been there, you’d have known it was no joyride’).”

Rajkumar Gupta, the unassuming director of the film, whose earlier work Aamir earned plaudits, says of the two, “They have different approaches to acting. Vidya immerses herself in the character; Rani is spontaneous.”

I ask Rani if she dislikes journalists a little less now that she is familiar with the Jessica Lal case, where the media played a vital role in ensuring justice.

Rani says, “I think it’s a wrong statement to make because I have always been fond of the media.”

Most stars have a love-hate relationship with the media, I say. “I don’t know about them, but my experience with the media has always been great,” Rani says. “Critics have applauded me whenever I have done a good job. The media has helped people become aware of me and made me a star.”

There is awkward silence, followed by a rebuke. “Again your question is wrong. I’m so sorry. You being a journalist, you are asking me wrong question over wrong question… You are misquoting.”

“I’m not misquoting. I’m asking a question,” I say.

“But you are misquoting the question. What the director and I have maintained is that the character of Meera is not based on any one journalist. She is an amalgamation of the eight to ten journalists who worked on the story at the time. It would be very unfair on our part to just be inspired by one.”

‘Chatterjee, Banerjee, no energy’. This is how critics would deprecate Indian football in its dark ages. I’m reminded of this expression. Chatterjee and Banerjee are not here. Mukherjee is. And she has enough energy to debate an army.

Rani has a pertinent line in the movie. “Taaqat sirf taaqatwar logon ke pass hoti hai. Aam aadmi ke pass hoti hai sirf woh sehne ki aadat (Only the powerful have power; the common man only has the capacity to bear and endure).” Does she, a Bollywood star who lives a privileged life, see the irony of it?

“We lead privileged lives to the extent that we travel and we get looked after,” Rani says. “But we work as hard as anyone, at all times of the day and in varying conditions. To say that we don’t understand aspects of normal life is pushing the envelope too far. We have been born and brought up as normal people. We’ve gone to school and college as normal people. Only after we pursued this career did we get this (fame and fortune). But we are still with reality. Stories in films are stories taken from real life.” But if she’s in a difficult situation, she obviously has more influence than a common man.

“I don’t think today there is any divide between a normal person and a celebrity,” she says. “We have seen cases of celebrities not enjoying privileges. At least it’s not happened with me, so I don’t know which stars you are talking about.”