A Photo Speaks Many Words

How I rediscovered my father and the times we lived in when I decided to exhibit personal photographs from our archives. 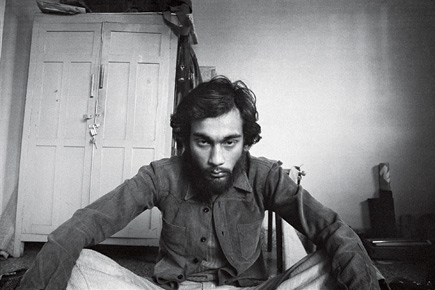 
During our time together, there were few words exchanged between my father and me. He never spoke much, and there were no sermons from him. In essence, my dialogue with him is happening now—through his photographs, and mine.

Photographs evoke memories, and this is naturally true for me where both of our works are concerned. Like me, I think more and more people are waking up and finally beginning to ‘read’ photography, interpreting images because of the associations they bring along with them.

That is one of the reasons I incorporated personal photographs in my exhibition Outside In: A Tale of Three Cities. The self-portrait, for instance, has been a method and device right from the time of the cave man; artists have always rendered themselves. In my case, too, they have been part of the narrative of my work. In the same way, images of my brother, father, mother and friends, they all come together to reflect elements of an era and time.

Outside In was first shown in 2007 at Arles in France, but it was shot four decades ago. Recently, there have been many other personal photography projects that have come to the attention of Indian audiences. Each of these works has it own importance in terms of the time and place it was shot, and the person who shot it. Space and time are important components of life, depending, of course, on what’s going on. So, in that sense, you could say that these works reinforce my belief in my work—as they, too, resonate personal journeys.

My parents did not take it well when I was thrown out of school at the age of 15, but they took it in their stride. For both, as educators, it must have been a personal sense of failure, but my father was practical about it. He sat me down and told me, “Look, the important thing is to be happy, and if you want to be a bricklayer and you are happy and contented, then it’s okay with us.” I think that had a great levelling effect on me. In school, I wanted to be a biochemist just because biology and chemistry always interested me. After leaving school, I just wanted to make a living.

In my childhood, I had a box camera. And I’d learnt to develop films and make prints by watching my father. As I already knew photography by the time I left school, I took up assignments covering theatrical performances, NGO documentation, assignments for the Red Cross, etcetera. I started my journalistic work only in 1983 and after that, I was represented by Gamma Liaison, an international news agency.

I would think my father was proud when I won the World Press Photo award at the age of 19. But he was very quiet about his feelings. He was the art critic for The Times of India then, and I remember he carried one of the photos from the series with him to the office. The next morning, we were both surprised to find it on the front page. I don’t think he had any leverage to have it placed as front-page news, but now that I look back, me, the fallen angel, had become the wonder kid!

In 2005, I went back into my archive of 35,000 negatives. A year later, I started to digitise my father’s work. On one occasion, while giving a talk at Chobi Mela in Dhaka in 2006, I randomly started showing these images off my computer. The response was fantastic. The next day, people told me that it was one of the most interesting talks they had heard and that whole evening had been truly magical.

Exhibiting my personal photographs was a process of self-discovery. In our house, we ate, slept and played with cameras all around us. So it was a part of our lives. Nowadays, with the intense media gaze, people tend to get tense about how their persona and image are presented; I guess it is a function of the times. During my youth, people were less self-conscious, and did not care about the camera.

As for my reasons for bringing out my father’s works, I feel it somehow reflects the ever-changing history of Indian photography. They are images of a certain era—in a context of what else was happening in the world then.

My father left Burma, his ancestral homeland, as a young boy, even as the Japanese war machinery was about to enter the country during the Second World War. India was kind to my father. To Richard, the young teenager, it gave a schooling, college education, free environment for thought, self-expression and creative growth that may not have been possible if he had chosen to return to his country after its independence. And that was true of many people of his generation. Photography was just one of many ways to express oneself during the process of nation-building in India in the 1950s and 1960s.

But my father never spoke of these times, or about his feelings of being a refugee, nor have I found any evidence of it in any of his writings. For all that he wrote, he was a man of few words within the family. Which is why I say that I feel I’m speaking to him now, through the photographs.

My memories are all in the photographs. That is what needs to be read. My words, for the most part, are pretty useless!

As told to Nilayan Dutta

Outside In: 70s and 80s, A Tale of Three Cities and A Critic’s Eye: Photographs by Richard Bartholomew from the 50s, 60s & 70s will show at The Harrington Street Arts Centre, Kolkata, till 26 September