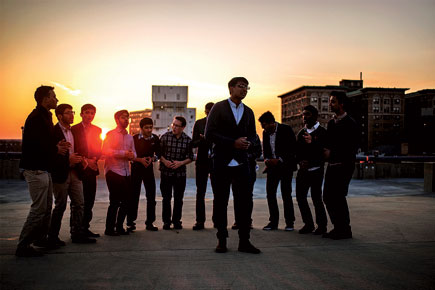 The year was 2001 and the movie was American Desi—a clichéd hotchpotch about a second-generation Indian ashamed of his Indianness. But what rescued the movie from mediocrity was its a cappella score, done by a little- known bunch of Ivy League students. We know them now as the popular South Asian fusion band, Penn Masala. Their version of Biddu’s Aap Jaisa Koi (Qurbani)—which began with a refreshing ‘dum-ta-dum-dum’ complete with an ‘oh yeah’—was splendid, and earned the band instant fame and recognition. That was the first time, perhaps, when a cappella made its way into the Indian musical consciousness. And while Penn Masala has been around for almost two decades, it’s now among the first bands we think of when we hear ‘a cappella’: music that uses only human sounds.

Earlier this month, Penn Masala released its latest video—clearly the hippest looking mash-up to date— with professional dancers in full gear. A fusion of Dilliwali Girlfriend/ Tonight I’m Loving You—you can’t help but give in to the vocal charm of Dilip Rajan and Prashant Ramesh. The video has garnered over 1.5 million hits on YouTube since its release. Penn Masala also features in Pitch Perfect 2—a franchise movie on a cappella bands in the US. In an email interview, they speak about the move to make a professional video, where they collaborated with fellow Penn group, Strictly Funk. ‘They’re a great dance company, and working with them on this video was both fun and eye-opening. Videos in general are an increasingly important content stream for us with the rise of YouTube and other social media channels. We’re always trying to improve the quality and experience of our videos.’

Formed in 1996 at University of Pennsylvania, Penn Masala was the world’s first premier ‘all-male South Asian a cappella band’, and its members have kept on changing— given that the men (aged 18–21) do graduate from college and one needs to be a current student in order to perform in the band. Last year, the band released the hugely successful Evolution of Bollywood Music, a fusion video of 39 songs—beginning with Suhaani Raat Dhal Chuki (Dulari), and ending with Badtameez Dil (Yeh Jawaani Hai Deewani). The band performs regularly across the US, and is synonymous with the genre it helped spawn, South Asian a cappella on American campuses (which sounds like a mouthful). Apart from Penn Masala, many other a cappella bands were formed in various colleges, all of them South Asian, and all fusing popular English music with Hindi and other Indian regional languages. These include bands like Chai-Town, Dhamakapella, Stanford Raagapella, Spartan Sur, Maize Mirchi, among others.

Perhaps this was their way of connecting to their country of origin, or expressing their unanimous love of Bollywood. In his paper ‘Collegiate a Cappella: Emulation and Originality’, Joshua S Duchan writes, ‘Collegiate a cappella balances emulation—a desire to sound like its recorded models—with an aspiration for originality… Although emulation and originality have an inherent tension and sometimes contradict each other, both pervade the practice of a cappella’. And that’s what you’ll notice in every a cappella composition. Yes, in a way they’re all cover versions, yet their originality cannot be questioned. The band members are the musical instruments themselves, blending and fusing English, Hindi, Tamil, Punjabi and Telugu songs.

There’s even an annual a cappella competition called Gathe Raho— prestigious on its own accord—where college bands compete to win the coveted crown. Two-time winner of this title, Dhamakapella, belongs to Case Western Reserve University, Cleveland, Ohio. It recently released its first music video, titled Radioactive/Dil Se, with an entire storyline. There’s a female ninja-like character out to save and revive music. The video, which opens with the deafening headline of a newspaper—‘Music is dead, announces government’—was shot over a weekend by a band member. The arrangement fuses Imagine Dragons’ Radioactive with Jiya Jale, Chaiyya Chaiyya, Thaiyya Thaiyya, and Ae Ajnabi from Dil Se. Dhamakapella’s second video is still in the works.

In a Skype chat, co-music director of the group Shaunak Roy, who voices the piano, talks about how he got interested in a cappella only after he came to college. He admits to being a huge fan of Bollywood music. The 14-member group was formed in 2005, when Komal Patel, the university’s Indian Student Association (ISA) president, decided that the annual cultural show needed some new flavour. Patel approached a member of the ISA board, Mayank Prasad, about putting together an a cappella act. Prasad envisioned a kind of music that would weave the best elements of both American and Indian music. With the help of Raksha Soora and Manoj Nair, he organised auditions, wrote two arrangements and directed a group of 11 members towards not only performing at the cultural show, but also gaining recognition as a student group on campus. Soon enough, the band made a name for itself, and currently has four non- South Asian members as well. “As long as you can sing and share our passion, you can be part of Dhamakapella,” says Roy.

But how does such a large group agree on songs that ought to be performed? Aren’t there several trips to the drawing board? While Penn Masala entrusts its music director with ‘overseeing our mixes and choosing which songs we perform live’, the members of Dhamakapella look for similarity in the meaning of the lyrics between the songs. “We don’t have a hard and fast rule that the songs have to fuse English and Hindi, we are very open to the idea of branching out to other Indian languages. However, since most of the group predominantly listens to Western songs and Bollywood, these are the languages that are reflected in our musical arrangements,” says Roy.

Chai-Town, another popular band, has been around for 16 years and is said to be the second most popular South Asian a cappella group in the US (after Penn Masala). From its album Fresh Brewed, the song Choli Ke Peechhe/My Kinda Girl is a standout. They sing in other languages too. The band’s version of Pachchai Nirame from Alaipayuthey, for example, is a soothing a cappella cover. Milan Shah, president of the band, talks about the genre: “A cappella is unlike any other type of music. Every sound, beat, harmony and emotion is derived from our voices and bodies. There is no feeling more uniting in our group [than] being able to all sing and create songs that usually have multiple instruments.”

Another popular a cappella band hails from Michigan State University, interestingly named Spartan Sur, formed in 2009. Its Facebook page describes its formation thus, ‘The group was created after each of its members all happened to eat a brand of chemical “X” filled pani puris. They had an adverse effect and created their addiction to harmonies! Singers by day and crime fighters by night, the singers of Sur are committed to the causes of peace… and pani puri’. One of its popular numbers is a mash-up of Uff Teri Ada (Karthik Calling Karthik)/ We Found Love (Rihanna and Calvin Harris). Here, the chorus in particular, takes on a different musical tangent. However, the band’s version of Tujhe Bhula Diya (Anjaana Anjaani) and Young and Beautiful (Lana Del Roy), begins on a patchy note, picking up momentum only as the song ends. That’s the thing with a cappella numbers. Performers need to gain momentum right from the start, or the audience is lost. Which is why a pre-performance ‘Dos and Donts’ routine is sometimes important. What you eat, drink, how much sleep you get, all of it has an impact on practice sessions too. But it is fun to note this routine. “Oh, we refrain from dairy products, chocolate and, yes, spicy food too,” Roy says. “Dairy products tend to build mucous in your throat, which doesn’t allow you to perform properly,” he explains.

But Rohit Prasanna of the all-male Stanford Raagapella doesn’t agree. He laughs at the idea of any dietary restrictions. “I just avoid coffee,” he says. His band stands out for its blend of voices, as opposed to just voice imitations of instruments. It has attempted Carnatic music as well, having performed the devotional track Chandrachooda Shivashankara set in raaga Hamsanandi and Aadi taalam. The a cappella version gives it an entirely different spin without any loss of devotional emotion. “A cappella has become popular in the last decade-and-a-half. The thing about it is that it’s very amenable to modern music, and we pride ourselves in the fact that we sing in seven different languages,” Prasanna says. Many a Sunday morning was spent watching BR Chopra’s Mahabharat, with Mahendra Kapoor’s sonorous voice ringing in our ears. But do lend the Raagapella version of the title track an ear. The karmanye vadhikaraste in the beginning sounds like a gospel choir, and is something you’d want to listen to on loop. This band has even performed with AR Rahman, and its first album—Raags to Riches—includes what has become a staple of its repertoire, an arrangement of AR Rahman’s Vande Mataram (Maa Tujhe Salaam). Its second album, Raag Time, has just been released.

Other a cappella bands that deserve mention are Maize Mirchi, New York Masti (an all-girl a cappella band), Berkeley Dil Se, Columbia Sur and Yale Sur-et-Vertaal. While all of these bands have a strong social media presence— they’re on YouTube, SoundCloud, Facebook, Twitter, iTunes—something that’s crucial to make an impact, each has a desire to go beyond. Bands like Penn Masala and Chai-Town have been able to manage that to an extent.

“That’s something we need to focus on—publicity,” says Prasanna. But that’s something he says he’s going to focus and build on when he becomes president of the band next year. Until then, Stanford Ragapella can multiply its fanbase on social media.