A Brush with Fame

Suresh lives on the streets of Mumbai. He also likes to draw. What does he think of our great artists on display at the NGMA? 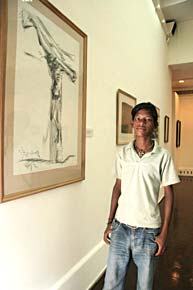 Suresh lives on the streets of Mumbai. He also likes to draw. What does he think of our great artists?


Suresh is thin, sallow and lives with his extended family on the footpath at the corner of Fashion Street in Mumbai. He studies in the fourth standard, and for someone who’s “13 or 14” also earns his way through life after school hours. He used to sell colouring books at traffic signals during the nights. But recently, an anda bhurji (scrambled eggs) stall owner asked him to be his assistant. He has promised to pay Suresh Rs 100 daily, to work five days a week. “I can work for about five weeks, earn Rs 2,500. Some of it will go in getting my mother’s pawned ornaments from the Marwari. The rest I’ll save.”

Suresh also likes to draw. Nothing fancy, since he has no oils or canvases. Just crayons and pencils, using which he makes mountains, houses, rivers and roads. This interest was one of the reasons why we decided to take him to the National Gallery of Modern Art. He had never been to an art gallery before and we thought it would be interesting to find out how he would react to pieces by India’s great artists.

As soon as Suresh entered, what immediately got his attention across an array of paintings was an enamel on canvas titled Orphan & The Kite, by Prabhakar Barwe. On a backdrop of light blue were disjointed structures—houses, a rock, a water tap and, at the centre of it, a boy with a slate. Suresh stood before the painting for a while. He liked the colours, but it was obvious that he identified with the subject.

In fact, most of the works which he evaluated as good were those that he could identify with. It also gave us some insights into his life. Especially when it came to the next work, which held him spellbound. It was a conte on paper called Christ on the Cross by Jatin Gandhi. We asked him why he liked it. “This is God. Hum usse mante hain (we believe in Him),” he said. He explained that for a while, he and his extended family had lived on the streets outside Mount Mary Church in Bandra. He often went to the church.

Suresh spent little time on esoteric works, but an SH Raza gouache on paper called Place of Worship, which is a rich medley of colours, had him tracing the lines of a temple and its walls. When we moved to the second floor, he moved animatedly to a large canvas towards the left of the staircase. It was a Meera Devidayal oil on canvas titled Haji Malang Darbar, a reproduction of the shrine of a Muslim mystic in Kalyan. “I’ve been there. This is beautiful,” Suresh said.

Though Suresh lives on Mumbai’s streets, he does have an address. In Solapur, there’s a village where his family has a room, their only shelter. During the rains, Suresh and his family move there. Village, therefore, finds strong resonance in him. Which is perhaps why he liked a 1950 Chitto Prasad oil pastel on paper showing a rustic landscape. “That’s sugarcane,” he said pointing to a swirl of line at the edge of a field. For the roof of the houses in the canvas, he thought that yellow would have worked just as well as the brown used.

A Gieve Patel acrylic on canvas, Langra Mangoes, which has a boy eating a mango in front of a cart piled with the fruit, as a man watches nearby, fired his imagination. “The boy is the seller and the man is asking him how much the mangoes are for,” he said.

On the topmost floor, there was a Vasudeo Kamat oil on canvas, Agni Tatwa, in which a face outlined in yellow lightning streaks has fingers outstretched downwards and below which there is a fire. To Suresh, the figure was a bhoot (ghost) burning the grass.

Next to this work was an Anil Naik black and white oil on canvas titled Portrait of MF Husain. Suresh didn’t recognise Husain, but he noted that the artist was working on a colour painting.

“How did you figure that out?” we asked.

We were impressed. Perhaps, it takes a child’s imagination to see colour in a black and white painting. n