The rarefied world of the Carnatic mandolin, orphaned after the untimely death of its pioneering exponent U Shrinivas, faces an existential crisis 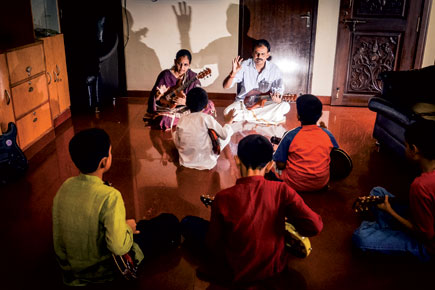 The rarefied world of the Carnatic mandolin, orphaned after the untimely death of its pioneering exponent U Shrinivas, faces an existential crisis

In an ivory kurta, his long hair parted like curtains to frame a warm smile, U Rajesh bears a striking likeness to his brother, Mandolin Shrinivas, who died prematurely on 19 September this year, shocking a legion of fans. On a Sunday evening at a small venue in Bangalore, Rajesh takes the stage with celebrated chitravina exponent N Ravikiran to play his first formal tribute to the prodigy who had startled the world of Carnatic classical music with his gorgeously introspective art and his technical mastery over a new instrument. The concert starts off with a classic invocation to Ganesha, and closes with a jugalbandi in raga keeravani, a beloved staple from Shrinivas’ repertoire, with several solos in between. This last piece is tumultuous, the brisk movements of the mandolin segueing imperceptibly into Ravikiran’s melodic flourish, and both sounds disappearing like a mirage into deep, lingering notes as though the two musicians were contemplating a world without Shrinivas. But this is not an elegy. Nor is it an impersonation. “I want this concert to be a celebration of his music,” Rajesh tells the audience. “Because there was, and there will be, only one U Shrinivas.”

In the conservative tradition of Carnatic music, where the voice reigns supreme, instruments are fragile commodities, dependent on the patronage of history or the succour of a disruptive genius to keep afloat. Unlike the violin, which was assimilated into the kutcheri format as a worthy accompaniment, or the veena, venerated as Saraswati incarnate, exotics such as the saxophone and the guitar have relied on indomitable personalities to vault them into the classical mainstream. In the early 1980s, one such instrument from the lute family with origins in Italy was redeemed by a boy of five who wanted to play classical music on it. Undeterred by its ‘foreign’ sound, he perfected Carnatic gamakas (ornamental phrases) on a special, five-stringed electric mandolin and began playing to rave reviews. “When Shrinivas started performing at such a young age, listeners and critics fell under his spell. They did not seem to mind that he used a guitar’s pickup and that the sound was electric. His brilliance won him acceptance among peers, and just like that, the mandolin became a Carnatic instrument,” says TM Krishna, a leading vocalist.

A Columbus on the high seas of classical music, Shrinivas charted a new course and dozens of others have since signed up for the voyage. Rajesh was among the first to make the journey, even if reluctantly. “I am an incidental musician. At the age of eight, I was inclined to be a pilot when my brother took me under his wing,” he says, with a humility one associates with his brother. A self-taught musician, Shrinivas expected his protégé to practise scrupulously as he himself did, but Rajesh, being nine years younger, remained playful. “I have played with him for two decades and it was always extremely challenging to be on stage together. He was such a genius,” he says. Though firmly rooted in the Carnatic style, Rajesh, a musician in his own right, flits between genres, experimenting with the sound of the instrument. “That is what hurts me now. I was never as serious a musician as he wanted me to be,” Rajesh says. Incidentally, the last time they performed together, in August this year, was at the Shakti Ganapati temple in Vadapalani, Chennai, where Shrinivas had played one of the first concerts of his musical career. The two also recorded an album, titled Timeless, that is up for release later this month.

Of course, Shrinivas had never planned for any of this to happen— his own precocity, the life of celebrity and global acclaim or the blind date with death. Happy to play a staccato instrument in a system that valued the lengthy note, he did not chase some grand, illusive virtuosity. “I wanted to make music. Things just happened naturally,” he once told the misinformed hosts of a Tamil TV talk show who kept calling him ‘Srinivasan’. But one wonders if he could have done more. Besides Rajesh, to whom he bequeathed much of his technical prowess, the maestro taught the mandolin to about 40 students, most of them in their teens, at his home in Vadapalani. “There are another 40-50 students, scattered across the world,” says Rajesh, adding that his priority now is to teach more. A few of Shrinivas’ students perform solo concerts, but whether any of them was able to fathom the depth of his repertoire is anybody’s guess. “A guru inspires his students, but it is also the other way round,” says Chitravina Ravikiran, whose name, like Shrinivas’, is synonymous with the instrument he wields. “With Shrinivas, though he had students, I don’t think anyone with the right wavelength came along to inspire him to share everything.”

But genius is a wonderful thing, tempting and teasing you to emulate it, Ravikiran points out. At the cusp of a busy concert season in Chennai, Sreeusha and Sireesha, 20-somethings who perform together as the Mandolin Sisters, talk about how they took up the instrument. “As children, when our father went to work, we would play with his guitar, but we soon realised it was too big for us. He introduced to us the mandolin, which had already seen a star in Shrinivas sir, and we started learning music in earnest,” says Sreeusha. The sisters wear matching outfits, share the same circle of friends and even play as one, their fingers sliding in perfect unison over their fretboards. “Sometimes when we play back recordings of our concerts, I am not sure if I played a particular alap or she did,” Sireesha says, pausing in the midst of a much- rehearsed piece in raga kedaram in the living room of their apartment in Vadapalani. Studying music under a vocalist who told them to treat the instrument as an extension of the voice, they have been touring and playing concerts for a decade, but it is impossible for a mandolinist not to be aware of the weight of time and of Shrinivas’ legacy. “He will remain the touchstone, the gold standard. Children learning the instrument are under serious pressure to match his talent at a very young age. If you have crossed 20, you are already too old to be a genius,” says Aravind Radhakrishnan, a parent from New Orleans whose 12-year-old son Pranik is a “casual player” of the Carnatic mandolin, coached by a violinist.

Can this generation of mandolinists, playing under duress to a cynical audience, guarantee a future for the instrument in the Carnatic ecosystem? “You may as well ask what will happen to the saxophone if Kadri Gopalnath stopped playing,” says Ravikiran. “Such instruments have few practitioners, and certainly none to rival the star status of these pioneers.”

All their lives, Shrinivas’ second cousin UP Raju and his wife Nagamani were seen as playing second fiddle to his genius. Accomplished players who independently mastered the nuances of the instrument, they struggled, on the one hand, to emerge from Shrinivas’ aura, and on the other against the relative obscurity of the instrument. “If there is a Tendulkar in the team, no one looks at a Kumble or an Azharuddin,” says Raju, who came to Chennai in the late 1980s to learn music, mentoring Nagamani in turn. Now they play as a duo, mostly because there aren’t enough slots at Chennai’s concert houses for two mandolin solos, Nagamani says. “At wedding concerts, people still walk up to us and ask about this strange instrument. So we have started talking about it and bringing out DVDs to introduce it to potential learners,” she says. When they are not touring, the couple dedicate a chunk of their time to coaching 25-30 students, including their 10-year-old son, at their house in Valasaravakkam, a suburb of Chennai.

Playing a concert on the mandolin is equivalent to playing several on a guitar, says Raju, whose first mandolin, in 1989, was an 800-rupee appurtenance that left his fingers sore. “The mandolin is an instrument with flair. In the classical style, one must learn to play it with restraint,” he says. Playing a chauka kala kriti—a slow, lingering composition that delves into the secrets of a raga—on the mandolin is one of the tests of a true master. “It took me a decade to hone my skills, but the learning never stops. We are trying to pass on this knowledge to the next generation and hope they do something magical with it.”

Real magic can happen when you have talent, direction and the luxury of time, says Ravikiran. “I was homeschooled till the age of nine. Mandolin Shrinivas never went to school. If you look at the lives of eminent musicians— Pandit Ravi Shankar, flautist Shashank Subramanyam—none of them went to school and got normalised. They had the whole day to explore music. That is the level of commitment that takes you to international levels. Unfortunately, few parents are willing to take this plunge today,” he says.

It took a century and the pioneering work of three stalwarts—Baluswami Dikshitar, the brother of Muthuswami Dikshitar, Varahappa Iyer, a minister in the Thanjavur court, and Vadivelu, of the Thanjavur Quarter—to adapt the violin, a Western instrument, for the Carnatic paradigm. The mandolin is still young, and it now finds itself at a critical juncture. Rajesh, Shrinivas’ sole confidant and the custodian of his musical legacy, knows he has a role to play. “There is tremendous responsibility on my shoulders,” he says,feeling like someone asked to write a book with a long-dead author. “On theconcert front, I am taking it slow. I do not want to spoil my brother’s name.” As Shrinivas’ life and work continue to pluck at heartstrings, other mandolinists must rise above poor imitation and do what he did best: enjoy making music.