The Most Beautiful Women 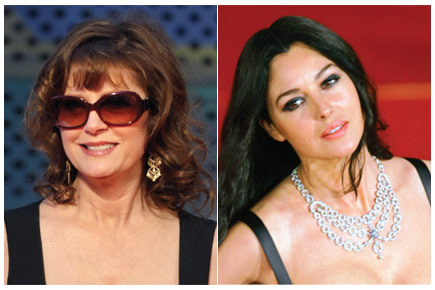 
Since the new Miss Universe has now been chosen, to extreme worldwide apathy, it’s time to ask the hard question. Who are the most beautiful women in the world, really? A friend and I were discussing this very important issue the other day. This was the list we came up with (with names in no particular order). Don’t laugh. It’s just that we are getting middle-aged.

Dame Judi Dench. Every line on her face spells character. The face glows with honesty, courage and strength. The grey-blue eyes speak of a person who has seen a lot, yet not lost a bit of compassion for any fellow human being. There is something in her that makes you want to hug her, yet be afraid to be on the wrong side of her. All the roles she has played on screen, whether it’s the life-loving diabetic grandmother in Chocolat, the stately Queen Elizabeth I in Shakespeare in Love, or M in the Bond films, are women of grit, spirit and determination. Naturally.

Meryl Streep. Perhaps the only film star of her generation who has not undergone cosmetic surgery to keep age away, and kept getting more beautiful and graceful as she grew older. Maybe true beauty can only be judged when a woman ages and loses none of it. Really beautiful women become even more stunning when their faces get wrinkled. Meryl Streep does not dress up, her eyes radiate some inner luminescence. When she smiles, it’s incandescent. Again, like Dench’s, her face seems to embody a rare goodness and honesty. Even as the hell-hound boss in The Devil Wears Prada, you can’t help but love her.

Susan Sarandon. A face that contains so much tragedy and empathy embedded in every pore. As Sister Helen Prejean in Dead Man Walking, the film directed by her actor-husband Tim Robbins, she embodies the Christian virtues of charity and forgiveness as she battles to save the soul of death row inmate Sean Penn. Her eyes, with its long lashes, are possibly the most beautiful in the world. And she is sexy.

Helen Mirren. Her acting talent and stellar performances went unrewarded for far too long before she won the Oscar for playing Queen Elizabeth II in The Queen, a film on the seven days after Princess Diana’s death. Mirren has only herself to blame for this neglect. Quite simply, she appeared nude in too many films early in her career to be taken seriously. In Peter Greenaway’s The Cook, The Thief, His Wife and Her Lover, I think she spent a straight hour or so in the raw. But her delicate Russian beauty is enchanting. The moment in The Queen when Elizabeth sees the majestic stag’s head in its killer’s hunting lodge—the expression on her face, the sadness, the humanity—is unforgettable. Whenever The Queen has come up in any conversation I have had, someone has mentioned that scene and that look. Last year, there was a picture in the newspapers of Mirren holidaying on a beach, wearing a bikini. No other 64-year-old in the world, I think, has such an incredible body.

So what is beauty? The list my friend and I came up with seems to have less to do with physical looks, and more with what we perceive in their faces, with the sort of person who sits behind the face, our perception of that person. Frankly, I didn’t find Miss Venezuela, who was crowned Miss Universe last week, beautiful at all. To me, she just looked like a dumb, grinning woman. But then again, I am attributing something to her without hearing her speak and knowing nothing about her. This is unfair, but then, all lists are unfair to some extent or the other. What to do, we are like this only.

But can’t there be anyone on our list who is below 50? Times can’t be that bad, and we can’t be that old, my friend and I thought. So another round of brainstorming. And two names instantly came to mind. Halle Berry and Monica Bellucci. These two ladies are visions of perfection, and Halle Berry’s smile is possibly the most lovely in the world. So.

Please write in with your set of beauties to sandipan@openmedianetwork.in.