The Zen of Weightlifting

Why it is more about the mind than body 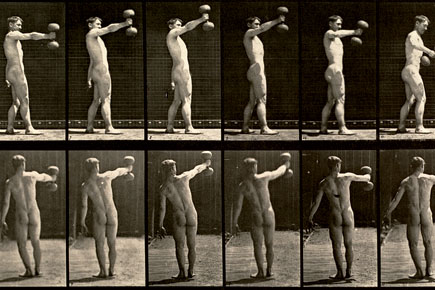 Why it is more about the mind than body


Weightlifting: brute hulking strength; the crude deployment of power; the triumph of sheer exertion over subtlety. Such are the common conceptions of one of the oldest forms of human activity. They are incomplete and misleading. Weightlifting is an acute form of meditative physical exertion, one which in its mind-and-body- transformative aspects rivals yoga. A meditative experience is one that displaces the quotidian, enabling a single- minded focus not available elsewhere in one’s life; all else falls away, leaving a clear mind.

To enable this departure from the daily, the rituals of weightlifting are exercises in meditation, ones performed with heavy weights. Weightlifting begins with simplicity and moves to complexity. There are three primary movements: pick up a weight; raise a weight over your head; squat down and stand up with a weight on your back. All lifts are variants, no matter how exotic, of these basic movements.

Most people associate weightlifting with muscular jocks bench-pressing or performing bicep curls with dumbbells. But weightlifting is richer than that. It can be split, roughly, into two broad categories: powerlifting, which includes the squat, deadlift, military (or shoulder) press and the bench press; and Olympic lifting, which includes the clean-and- jerk and the snatch. The average person will have seen Olympic lifting on television and perhaps done some bench pressing. Actual practitioners of the power and Olympic lifts are rarer.

The fundamental problem with weights is that they are heavy. Heaviness speaks to resistance, to impediments to the natural motion and liberty of our body. We seek lightness and fluidity in our motion; the weights of the barbell and plate interfere with that aspiration. Overcoming these barriers, experiencing a painful constriction for a brief wrenching moment before transcending it, moving from restriction to freedom—this is where the joy of weightlifting lies.

Clichés abound in the world of weightlifting, but one is undoubtedly true: that real lifting happens in the head. The brain cannot be dismissed; brawn cannot be glorified at its expense. Body and mind must come together as one to enable the act of weight displacement. The lifter must believe in a new law of gravity: whatever goes down—or is at floor or shoulder height—must come up. So the first means by which weightlifting induces a meditative mood in the weightlifter is concentration on the task. This is achieved in the theatre of the mind via visualisation, often by way of mental imagery that features the weightlifter triumphant. Sometimes the lifter imagines having already lifted the weight successfully and sometimes the barbell as a foe that must be vanquished.

The physical particulars of weightlifting enable the creation of a ritualised space. Its rituals enable the creation of habits, which, if cultivated assiduously, as William James pointed out, have the power to transform the lifter into a new person. The barbell must be in the right position; the weights must be correct; a good lifter conducts a full external check and calculates the payload of his lift. The warm-ups before the main lifts demand close adherence to a sequence. Idle chatter with fellow lifters ceases. The mind focuses on the bar, on the task to be completed. The clever lifter lets these details absorb him. The more the lifter immerses himself in ritual, the more lifting becomes a habit and the better he becomes.

Regimes of meditation ask us to place our bodies in comfortable spaces where we may reside alone with ourselves; they ask us to rely on visual, aural and respiratory cues. Lifters go to the weightlifting platform or rack to grasp a barbell and begin a different kind of meditation. They too must concentrate on breathing, for every lift has its own particular breathing cue. (The cue for a successful squat is to take a big enough breath to get a ‘Buddha belly’ and to hold it on the way down). Lifters use visual cues as well: a common one for squatting and deadlifting is to stare at a point on the floor a few feet away so the weightlifter is not looking straight up but slightly downwards. These body adjustments place the lifter in the right physical mode for the task.

All coaches advise their wards that lifts begin earlier than they might imagine, well before the weight starts moving. Grasping the bar—literally, coming to grips with the challenge—is when the lift begins. Then, hands on the bar, body and mind in ‘place’, the lifter sets off.

It is the weight that focuses the lifter’s mind, what enables concentration on the task at hand. It is the lodestar, the singular point of invariance. The weight will not change, its fidelity is assured. It is what centres the lifter’s attention. Thinking of something else? I’m here. Thinking of going somewhere? Still here. With that fact assured, the lifter turns to physical movement and exertion.

Lifts are short, but during their execution, time slows down and distinct stages emerge, each with its own duration, each with its own distinct imprint and familiar visions. In the squat, the lifter stands erect, bar on shoulders, knees locked out, and takes a big breath, readies oneself and descends. This moment, as he heads down to the ‘hole’, requires its own trajectory and pace; too slow, and you fatigue yourself unnecessarily, too fast and you lose the tightness of the bodyframe required to squat. Once in the ‘hole’, the lifter must ‘bounce out’ quickly and head back up. This descent includes a stage where gravity suddenly asserts itself; the moment of truth is at hand. The struggle that follows is what makes it all worthwhile: the lifter discovers mental and physical fortitude. Or not.

But it is not the mere movement of the weight that demands effort. The serious weightlifter is acutely conscious of form, of a lift executed properly. It is not enough that the weight be displaced; it must be done along a proper path. Failure invariably adds injury to the insult of an ugly lift. Adherence to proper form is thus infected with a peculiar apprehension, one that clarifies the mind.

Learning to lift is a tedious process precisely because the proper form that protects injury and produces a beautiful lift alike takes so long to realise. Beginner lifters are warned by good coaches that years—not days or weeks or months—of practice and thousands of repetitions lie ahead. This can work as consolation during a difficult lifting session or turn into a millstone around one’s neck. The yoga beginner learns that pretzel-like twists of the body lie far away in the future; similarly, the novice lifter finds that the smooth incredulity-inducing movement of the barbell over the head that the expert snatcher pulls off requires much diligence and training.

The successful completion of a lift in good form induces euphoria, unsurprisingly. It is why we lift. Changes in one’s body come later, but at the moment of completion, one has the feeling of a barrier transcended, an obstacle overcome, and of an accomplishment that delivers its own aesthetic satisfaction.

The promise of weightlifting, in sum, operates at two levels. At one, it speaks to our physical transformation, to the replacement of flab with muscle, to the larvae- to-butterfly transformation of a weakling into an Atlas. But at another, it assures the metamorphosis of the scattered, confused, dilettantish and lazy mind into one that is disciplined, methodical, patient and focused.

In a world that bombards us with invitations to distraction, the weightlifting platform offers us a space within which to shut ourselves off and concentrate. Scientologists waste too much time seeking the mumbo-jumbo of a ‘clear’ life; a far healthier and more useful approach is available without having to get esoteric. At a gym close to you.

Samir Chopra is a professor of philosophy at Brooklyn College and blogs at samirchopra.com