The Return of Rafa 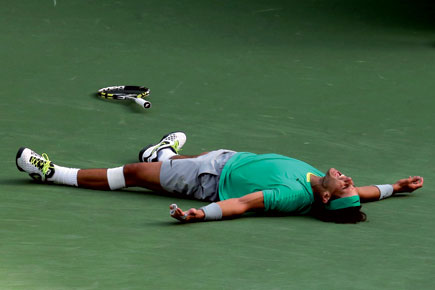 
Last year, Rafael Nadal signed up with PokerStars, a leading poker website. In a promotional stunt, Nadal pretended to be a golf course receptionist named Tony. He wore red glasses and messed his hair up a bit. The disguise was feeble. People instantly recognised the tennis star. But Nadal’s challenge was to maintain the bluff. He didn’t give in. He admitted to the puzzled guests that he did look like Nadal. But he was Tony.

Nadal’s opponents would be wishing he had remained Tony. No more rapacious groundstrokes to face. No more dealing with a force that chases down every ball thrown at it. No more awkward lefty angles and spins. But sorry guys, Tony is Rafa again. One of the great conundrums in sports—a boy-man scared of dogs and darkness but a ferocious competitor on court—is back to his trophy biting ways after a seven month lay-off due to a gimpy knee.

Clay is Nadal’s territory. Clay is where he was born as a tennis player. And clay is where he played his first three events upon returning to action. But clinching proof that he was back at his best came on hard courts—a surface that has never been his friend. Against all expectations, Nadal won the Masters Series tournament in Indian Wells, defeating players he was not expected to so soon, at least not on this surface. It was a typical Nadal display, full of long inspiring points, scampering moves around the court, the finishing blows coming from heavily topspun shots. It is true that Nadal did not have to face the world’s two best players, Novak Djokovic and Andy Murray, in Indian Wells. But opponents like Tomas Berdych and Juan Martin Del Potro were stern enough tests. (Nadal also defeated Roger Federer, but Federer was incapacitated and out of sorts.)

What makes Nadal so hard to beat? For one, he has exemplary fighting spirit, the kind that would have appealed to Ernest Hemingway. Hemingway valued the manly arts, and to him a hero was one who muscled down adversity. There are athletes who love the game. And there are athletes who love to compete. Nadal is in the latter category. He has often said it himself. If Federer is peerless in the way he hits the ball, Nadal is the ultimate warrior. If a contemporary song had to be selected for Nadal, it would be Titanium. (I’m bulletproof, nothing to lose, Fire away, fire away) Nadal is primarily a defensive player whose biggest strength is chasing every ball. By nature retrievers are boring. But that is not the case with Nadal. The intensity with which he plays, the impossible retrievals he makes and his swaggering celebrations ignite tennis arenas. If Federer plays tennis of the heavens, then Nadal plays tennis of the people.

Adequate acknowledgement has been bestowed upon Nadal’s grit and the fierceness of his shots. But there are two things he is not given enough credit for: his serve and his feel for the ball. Nadal’s serve is one of the most improved parts of his game. At the start of his career his average first serve speed was around 100 mph. Now it is around 115 mph, and sometimes around 120 mph too. This, coupled with his mental strength that kicks in when he has to save breakpoints, makes it very hard to take games off his serve. And his feel for the ball allows him to execute one of the most important shots in his arsenal: the defensive lob. There are several occasions when opponents corner Nadal and move towards the net, expecting a weak return. The return is indeed defensive, but it is not weak. It is a carefully calibrated reply that floats right back onto the baseline. Too high or deep to volley, the opponent has no option but to pedal back to the baseline. And the rally is back on equal terms. The slower courts of today and near miraculous properties of contemporary tennis strings no doubt help Nadal. But he wouldn’t be able to exploit these advantages without his oncourt agility and strategic nous.

The return of Nadal has added sizzle to this year’s tennis season. His rivalry with world No 1 Djokovic, while not as evocative and thrilling as the one with Federer, is bigger in terms of matches. They have played 33 times in all, five times more than Nadal and Federer. Their rivalry has risen to a higher plane the last two years. In 2011 and early 2012, Djokovic dominated Nadal, defeating him seven times in a row. But Nadal cracked the puzzle, beating Djokovic three consecutive times in his beloved clay court season last year, till he was forced into a leave of absence. It will be interesting to see how things between the two shape up now. At the French Open at least, Nadal will be the favourite.

Though Djokovic is Nadal’s chief rival, many followers of tennis are more curious to see how the ‘new’ Andy Murray fares against the Spaniard. Last year was Murray’s breakthrough year. He has the biggest serve and is capable of more variety in his game than Nadal and Djokovic. Mentally, however, he is more fragile. But considering that he won his first Grand Slam last year and is more confident of himself, it will be interesting to see how he competes against Nadal.

Then there is Federer and the GOAT debate (Greatest of All Time). Nadal’s 19th win over Federer from 29 matches gave more ammunition to Nadal fans for their argument against Federer’s unofficial status as the GOAT. And it is clear that with his 32nd birthday just four months away, Federer will lose more often than win against his chief rivals. It is also unlikely he will win any more Slams. But with due respect to Nadal, Federer remains the greater player as of now. He has 17 Grand Slams, at least half of them in the Nadal-Djokovic era. Besides, he has a more even set of Grand Slams than Nadal (seven Wimbledons, five US Opens, four Australian Opens, and one French Open. In comparison, seven of Nadal’s eleven Slams are French Opens).

An unquantifiable but significant factor is the beauty of Federer’s game. All considered, most agree that he is still king. But if Nadal matches his tally of Slams and proves himself on other surfaces, then he has an equally strong, if not stronger, argument for GOATness. And it is possible he will do that. Rafael Nadal is one player you can never write off.