Making sense of the hype over Tendulkar’s last Test 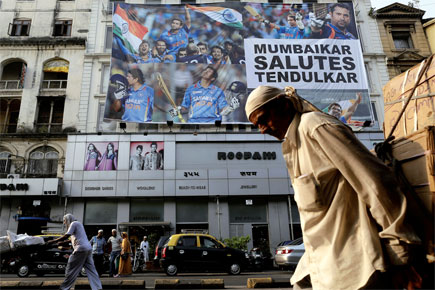 Making sense of the hype over Tendulkar’s last Test

On Friday night, outside the Experimental Theatre at NCPA (National Centre for the Performing Arts), the venue of the Tata Literature Live festival, a middle- aged woman introduced herself as a banker to an audience of two. She was soon crowing about how she was once invited to a dinner that included Sachin Tendulkar and some other cricketers. But she didn’t go because she didn’t understand cricket. “Why make a fool of myself?” she reasoned. Tendulkar had just got out that day in the last Test of his life, and in the subtle and not so subtle conventions of human interaction, she was using him to affirm something about herself. Sometime later, the door opened and everyone walked in. The talk was on an anecdotal history of Indian cricket by Boria Majumdar. He is a forceful speaker and, as the official biographer of Tendulkar, it was no surprise his talk was peppered with Tendulkar’s name.

Majumdar began with a fascinating story of the politics behind the England tour of 1932. The Maharaja of Patiala outmanoeuvred and outspent the Maharaja of Vizianagram to become captain and then promptly gave it up. Majumdar says it was just as well because he couldn’t hold a bat. In his stead, went the Maharaja of Porbandar, who had a batting average of 0.66. He also sensibly turned over charge to CK Nayudu once in England. For the 1936 tour, there was another bout of such absurdities, which saw their star batsman, Lala Amarnath, being asked to return home after abusing the captain, the Maharaja of Vizianagram (who came to the tour with 200 suitcases). Majumdar goes from decade to decade. He touches on Sunil Gavaskar bringing to the team the idea of victory, when he returned an average of 154.20 on his debut tour of West Indies. He talks about the BCCI’s remarkable rise from an institution with a deficit of Rs 62,62,000 in its accounts in 1992 to its current value of $3.4 billion. “It is actually a 20-year story,” says Majumdar.

A few things can be inferred from the talk about the conditions that created a Tendulkar. There is the fact that he was from Mumbai, the heart of Indian cricket then. Genius was spotted early by the greats of the game in Mumbai, like Gavaskar, and Tendulkar didn’t have to negotiate the politics of selection. Also, BCCI’s emergence as the powerhouse of cricket coincided with India’s economic liberalisation. It was also not coincidentally the time Tendulkar’s international career was taking off.

Liberalisation opened the doors to enormous consumption, which meant enormous efforts of marketing, and marketers need symbols, preferably those with genius and integrity. The Indian skies were also opening up to private television channels, and the living image was getting into every drawing room. The pool of those who would be part of a Tendulkar cult multiplied by tens of millions. Tendulkar in 1970 would still have been a superstar like Gavaskar, but no one would have given him epithets like ‘god’. Extraordinary talent may have been a necessary condition but would not have been sufficient; the dynamics of the society around him created the icon.

During the World Cup final, cricket was palpable in the air in Mumbai. The streets were so empty it looked like the Shiv Sena had called a bandh. For Tendulkar’s last Test, traffic crawled in the morning outside the stadium when the match opened but that was about it. The media, like Majumdar, allowed itself to believe the world had come to a stop because, for them, it was a seminal event. But you just have to look at the photo features across those days to understand how newspapers were trying to find the occasion’s colour across town and coming short. They had little to show mass hysteria. Images of curly haired children holding bats was the most they could do.

There are reasons for this. The World Cup final was on one day and, all said and done, it was about the game and the tensions and associations that come with it. This Test was going to be a five-day affair in which you couldn’t predict when Tendulkar would play. No one has the time or inclination to watch Tests anymore, especially when the result is already known. Tendulkar has a connect with India that no sportsman has had, but that still does not extend to people keeping their lives on hold for five days. To portray it in such a manner, as the media did, was to delude oneself. Of course, many felt emotionally adrift for a while but time did not stand still.

The afternoon that Tendulkar batted, the crowd outside Wankhede would not have been more than you could count. On the opposite side of the street, on Marine Drive, there were television crews desperately looking for stuff to keep it interesting. And that is why Prakash Phand, with roller skates under him, was sitting with his back to the sea giving bytes to a Hindi news channel.

The afternoon sun is beating down hard and Phand looks spent. Nearby there is a banner that says ‘Skating Star of India’. Between 2005 and 2007, over 735 days, he claims to have skated 122,407 kilometres all over India. I ask him if he is there to watch the Test. He says ‘no’. He is just here to convey a message to ‘Brother Sachin’ about coaching orphans after his retirement so that he can change their lives.

Phand is obviously here to use the last Test for some mileage. But it is no more than what the bold and beautiful with direct access to Tendulkar are doing. Aamir Khan, for example, who came in early morning to be in time to see the first ball bowled. And then left midway when the West Indies started batting only to return when they collapsed and India started its first innings. Journalists immediately started to receive a message from a PR company that an event to promote Dhoom 3 had been postponed because of this. You also read elsewhere that Aamir was going to dedicate a song from the movie to Tendulkar at the event. What Phand is doing is what Aamir Khan and Yash Raj Productions are doing—using Tendulkar to add some flavour to their show. And there is no reason to doubt either Phand or Aamir’s fondness of Tendulkar. Only Phand is a poor young man making the best of what is available to him. It says something about human industry that a not-so-well-off man can roller-skate across the country to make a name for himself, and then try some ambush marketing to build on it some more.

On the morning of the Test, when the crowds were lined up to enter the stadium, a small market had come into being.

There were flags on sale, whose staffs were taken out by securitymen at the gate. Urchins roamed around shouting ‘Paint Paint’ to colour the faces of people with the name ‘Sachin’. There were also budding entrepreneurs like Parth Kapadia, who stood holding a spoof Beatles T-shirt with Tendulkar and other Indian cricketers on it. He is part of a start-up that designs T-shirts for college students.

“We were just waiting for Sachin to announce his retirement so we could launch these T-shirts,” he said. The T-shirts nearly sold out that day. Outside Vinoo Mankad Gate, a BJP politician named Vinod Tawde had set up a banner of Tendulkar with his own photo to the right of the cricketer. All the main VIPs, including every Congressman from the Chief Minister to the Union law minister, entered through that gate.

Predictably, the banner was pulled down, but in a true reflection of government efficiency, the man charged with the job managed to tear off half of Tendulkar’s face. If you were someone looking for parallels, you would see in this a testament to politicians who have been trying to leech off Tendulkar.

Outside Gate 4 of Wankhede stadium, water bottles and bags are steadily piling up. Two municipal cleaners, Anushaya and Vijaya, are on the job. They look irritated. “Don’t they know they can’t bring these items? How many times do they have to be told? They don’t understand,” says Anushaya. She is quite unexcited about the jamboree.

She has seen it before, and cricket really does not interest her. It is just a day that she has to work harder.

But her irritation lasts only a couple of hours. Once everyone has entered, life returns to normal. A few men are still shouting ‘Paint Paint’ but no one’s buying. There are some people standing in clusters in the vague hope that something might happen. A hundred steps away, Mumbai hums along like any other day.

An interesting moment in Majumdar’s talk is the anecdote he starts with. He speaks about watching the Mumbai Test with Tendulkar’s family and later when they are leaving, there is a massive throng. As the cricketer’s mother is led into the car, Majumdar says, “Several politicians and VIPs came out at the same time. There was Aamir Khan, Ashutosh Gowariker, Raj Thackeray and a host of others. The moment this elderly woman came out—she is no celebrity herself—everyone moved to one corner, forming a kind of human chain and giving her a guard of honour. For me, an anecdotal history of human cricket starts from there.” For him, this scene embodied the decency and values cricket and Tendulkar stand for.

There is, however, another way of looking at it. Because the image also shows this—common folk kept at bay by a wall of VIPs, a club of the elite, who have co-opted Tendulkar. These are also the celebrities who just picked up a phone and got a ticket to the Test match while the rest of India had to count on a lottery for the fraction of seats reserved for the general public. The men who make up this queue are also the ones who have been asked over the past few days to relentlessly comment on Tendulkar as he bids farewell. The ones who, through their unending superlatives, give the appearance that the world has come to a standstill for the Test. They will now felicitate Tendulkar at different events. The politicians among them would have pointed out to the Government how much goodwill it will generate to give Tendulkar a Bharat Ratna, like a Rajya Sabha seat did earlier. They are the ones who, a day before the Test, held an event to name the press box at Wankhede after Bal Thackeray, a man who made his foot soldiers dig up the pitch here. This is the cream of India’s rulers who have embraced Tendulkar because his success rubs off on them. Contrast their exaggerations with the emotional balance that makes Tendulkar what he is. In his press conference, he talked about his coach Ramakant Achrekar never saying ‘well played’ to him, lest the praise go to his head. These VIPs stand at the other extreme. And people know. Which is why during the farewell ceremony, when Ravi Shastri introduced the hangers-on and politicians, they got booed.