Off-spinner Anisa Mohammed believes she has Indian roots. But she is more interested in taking wickets and listening to Celine Dion 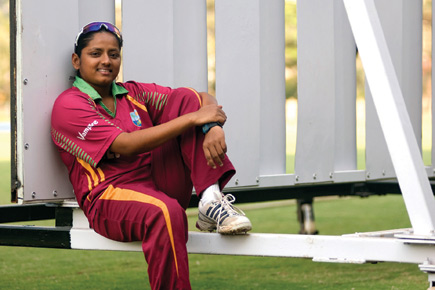 Off-spinner Anisa Mohammed believes she has Indian roots. But she is more interested in taking wickets and listening to Celine Dion.


In women’s cricket, your first career wicket might be against an unlikely sounding cricketer called Ritsuko Hiroto. It is a world where the press conference with a West Indies team is over after four questions. But if it does not have the scale of the men’s game, it has the same routines. There is net practice. Interviews are only granted “after the game.” It is also true that the standard of women’s cricket has picked up. Jhulan Goswami, the Indian captain and fast bowler, bowls at 120 kmph, matching Australia’s Cathryn Fitzpatrick, the woman rated the fastest ever. Better fitness and playing conditions mean that a batswoman forced on the backfoot by pace and bounce is not a rare sight.

The West Indies women’s squad is in India to play five ODIs and three T20 games. Their net practice is nearing conclusion one evening at the Mumbai Cricket Association’s new facility at the Bandra-Kurla Complex; only the pick-up-and-throw drill is left. Old white balls are placed in receptacles near the edge of the 15-yard circle. The fielder has to sprint to each of these, pick up and throw at a stump, run back to start position, off to the next receptacle for the next throw.

Off-spinner and multiple record-holder Anisa Mohammed, 22, finishes the drill. She hauls her huge, maroon kit bag up the white stairs of the clubhouse. A member of the team support staff, sitting in the clubhouse, chides her. Something about everyone looking exhausted climbing up those steps. The exact words are hard to decipher due to the heavy Caribbean accent, where syllables pitch and sway to create a lilting singsong.

Anisa, the one who started her career with the priceless wicket of Hiroto, is easy to spot among her teammates. She is the only player in the squad with South Asian origins. Which country exactly? That she is unsure of. But it is likely India. That much is known.

“Maybe I have ancestors here,” the Trinidadian says. “Perhaps my great great great grandparents were from India. But I can’t be too sure. Since my parents were born and brought up in Trinidad, they too do not know for certain where we are from.” In any case, it is not something that concerns her much. There is no identity angst. She has heard of VS Naipaul. She makes a writing motion with her right hand when the name is mentioned. She has not read him.

Despite the vagueness about her antecedents, Anisa looks Indian. Besides, she possesses the other great Indian talent—the art of spin. As much as women’s fast bowling has improved, it is spin through which fatal blows are often dealt. “Spin is important in women’s cricket,” says Sherwin Campbell, former West Indies player who is now coaching the women’s team. Anisa says, “The pacers do their part, but there are a lot of players who find it challenging to play spin.”

Anisa’s deliveries can be as difficult to pick as her words. She took four for 27 from eight overs in the first ODI in Mumbai, helping restrict the home team to a modest 161. Stafanie Taylor, the team’s star batswoman along with Deandra Dottin, scored 85 to complete the Caribbean victory.

“Anisa and Stafanie have delivered for us before, and again today, they showed that they are world-class players,” coach Campbell says. “Anisa bowled really well, and from the start of her spell, she was looking confident and posed problems for the Indians.”

The Mumbai spell adds to Anisa’s impressive resumé. “I hold five T20 records,” she says when asked about her career highlights. “Most career wickets (36). Most four-wicket hauls (four). Only person with consecutive four-wicket hauls. Most wickets in a calendar year (20 in 2010) and best figures by a captain (four for nine against Sri Lanka).”

She has done well against Sri Lanka. In Twenty20 as well as ODIs, Anisa has found wickets against a country that is home to the game’s most successful bowler, who also happens to be an off-spinner. Muttiah Muralitharan is someone she looks up to. Harbhajan Singh too.

“They think when they are bowling. They are always trying to outthink the batsman,” she says of the two.

The ball is relatively new when she comes on for her spell, especially in Twenty20. She says this does not come in the way of turn. “The white ball loses shine quickly,” she says. She is a short girl but her small hands are not a deterrent.

Anisa’s parents were cricketers. “Both were all-rounders and played club cricket in Trinidad,” she says. Club cricket is a thriving, year-round activity in some parts of the West Indies. That is how Anisa got interested in the game. In fact, she has a twin sister, Alisa, who also bowls off-spin. Alisa also plays club cricket in Trinidad but has yet to make it to the national team.

Brian Lara and Shivnarine Chanderpaul are the West Indian cricketers Anisa admires most. Away from cricket, she enjoys music and spending time with family. “You won’t find me in clubs,” she says. Her love of music is as obsessive as Sachin Tendulkar’s. Like the Indian icon, music is integral to her cricketing well-being. “Before a game, after a game, I listen to music. [If] I don’t listen to music before a game, I don’t perform to the best of my abilities,” she says. Slow rock is her genre of choice. “Celine Dion and stuff like that,” she says, “Love songs.” The number of songs on her iPod: “Just over a hundred.”

Anisa started playing at 15. At 22, she is a sort of veteran. The West Indies board recently rewarded her with a central contract, if only a ‘B’ category. She was one of just six selected for a central contract. As with many questions, Anisa’s first response, when asked about the deal, is laughter. “This is my ninth year playing for the West Indies. So it is nice to be recognised. I’m glad the board is looking after women’s cricket. I hope it is motivation for others to take up the sport.”