The Gods Must Be Racy

Indian roads are a nightmare, smuggled superbikes a menace. But the Gods (Group of Delhi Superbikers) are ever ready to beguile us for their sport 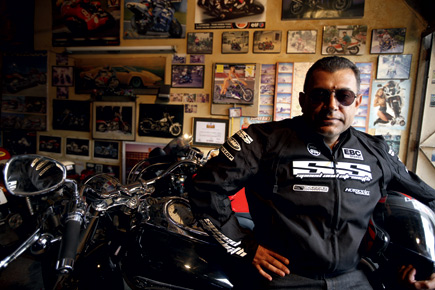 Indian roads are a nightmare, smuggled superbikes a menace. But the Gods (Group of Delhi Superbikers) are ever ready to beguile us for their sport

So goes a customary prayer that bikers say before they hit the road on their 1,000 cc plus superbikes. ‘Super’ because these are two-wheeled road-scorchers that push power, handling and braking to their limits of performance. Available in India at prices ranging from Rs 6 lakh to Rs 35 lakh under such brands as Ducati, Honda, Yamaha and Hayabusa, even Harley-Davidson, these are signifiers of daredevilry for more reasons than their engineering, though. Given the general riding conditions in the country, with fast and slow vehicles jostling for lane space, constant human and animal intervention, and driving habits—of others, of course—worthy of a circus act, the dangers come frequent and unannounced.

Superbikes, which can attain a speed of 100 kmph in three seconds flat, can spell disaster on Indian roads. One such disaster recently struck India’s former cricket captain Mohammad Azharuddin’s 19-year-old younger son Ayazuddin, who sped his brand new Suzuki GSX R1000 to death last month on Hyderabad’s Outer Ring Road. He was reportedly touching 200 kmph, and died in hospital a few days after he crashed the bike. His cousin Ajmal-ur-Rahman, 16, riding pillion, died on the spot.

The news made life awkward for Bittu Sondhi, India’s largest dealer of superbikes. He was the one who had sold Azharuddin the bike as a gift for his son, who, along with his elder brother Asaduddin and an uncle, was at Bittu’s shop in Lajpat Nagar, Delhi, just a couple of days before the mishap. Bittu had

advised them how to operate the bike and flagged the dangers of speeding too much too early. Ayazuddin had also tried on biking jackets and trousers, but refused to buy the riding gear as he found it “too heavy”.

Bittu is tightlipped about the episode, but admits it has left him disturbed. “It was a personal loss to me,” he says. The bike was purchased for Rs 14 lakh, inclusive of import duty, in the name of a Hyderabad-based footwear trader Syed Athar Ali (why is still under investigation and Azharuddin has issued no clarification on the matter). “The transaction was absolutely legal,” avers Bittu, however, “or else I would be in jail.”

Fewer bikes are being smuggled into India now that almost all top-end models are available in the country, and at prices lower than what it costs to import one directly yourself. But this has not killed the grey market, since a smuggled bike still costs half of what a legally imported one would after duty is paid on it.

The deterrent these days is the tough stance taken by the Department of Revenue Intelligence (DRI), which led a massive crackdown on illegal imports in Mumbai in 2008 and Delhi in 2009. In its raids, the DRI found several superbikes with the same registration number. Some were registered in the names of petty farmers in Punjab, while many others had non-existent registration addresses supported by fake documents. It also clamped down on two notorious dealers of illegal bikes in Delhi: Gurinder Singh based in Mansarovar Garden and one Rishi of Charmswood Village, Faridabad.

All this is part of an elaborate racket, and the DRI knows how it works. According to a ‘show cause’ notice of DRI issued in August 2010, smugglers usually operate by importing bikes in ‘parts’ and then using forged ‘bills of entry’ to have them registered for road use. According to DRI sources, India could have as many as 3,000 superbikes that were sneaked in.

On a raid conducted on Rishi Sood, a Delhi-based exporter, the DRI found that he had smuggled a Ducati 1098 and Harley-Davidson Night Rod 1250, worth some Rs 7.5 lakh apiece, with the help of an agent called Nadir Ali based in Bandra, Mumbai. According to DRI sources, despite all the documentary proof on the racket in the department’s possession, the case was not pursued to its conclusion as the name of a member of an influential political family surfaced in the course of investigations for having acquired a smuggled bike.

Of course, there are law-abiding hobbyist bikers too, and to highlight the difference, they are coming together to form clubs of their own. Dr Arun Thareja, 51, is one of them. An ear-nose-throat specialist, in 1999 he founded the Group Of Delhi Superbikers (Gods), a close-knit group of some 50 bikers in the city. “I am not a loner when it comes to biking,” he says, “I was always in search of like-minded, passionate bikers to do it as a group sport.”

Thareja is a veteran. So much so that it is a ritual, an initiation ceremony of sorts, for new bikers to visit him for riding tips. It is, to him, “the oxygen of my life”, and he owns three superbikes: a Kawasaki Ninja ZX 12R, Honda CDR 1000RR and Yamaha Road Star 1700, worth Rs 14 lakh, Rs 13 lakh and Rs 15 lakh, respectively. Apart from these, he still has his first bike, a 27-year-old Yamaha RD 350, in good enough condition to roar down a highway. His garage is a biker’s delight, with hundreds of toy models of superbikes displayed on shelves, giving it the air of a museum, and plenty of posters of topless models astride bikes plastered on walls, raising the glamour quotient.

He and other Gods do weekly trips down highways on the city’s outskirts: NH 8, NH 24, the Noida-Greater Noida expressway are favourites. The motorcade is led by an experienced rider who regulates the speed—vrooming up to 120 kmph on stretches—with a ‘sweeper’ at the tail-end whose job is to alert the rest in case of a mishap or tumble. Newcomers must ride with the sweeper for their first ten group outings. Safety gear—helmet, jackets and boots—is a must too, and pillion riders have lately been disallowed (not safe enough).

To keep ‘rogues’ out, information on riding expeditions and routes is kept under tight control. Rogues are ‘commuter bikers’ who try to race them or outdo them in other ways. Angad Singh, a 31-year-old lawyer, elaborates: “They do stunts, hover around, and race ahead to make the point that they are better riders and it does not really matter much what bikes you ride.” These are people, Gods surmise, who are in such awe of superbikes that they feel compelled to measure themselves against these hefty machines. They are, of course, irritants. “They do not have any respect for the sport,” says an agitated Thareja.

The fastest bikes made in India—such as the Hero Honda Karizma ZMR, as also the Kawasaki Ninja, a 250 cc six-gear bike with a top speed of 175 kmph, and the 220 cc version of the Bajaj Pulsar—all sell in the range of Rs 1 lakh. (This is about Rs 50,000 less than locally made cruise bikes, such as Royal Enfield’s Classic Battle Green and Classic Desert Storm, which form a distinct category of bikes.) Whatever owners of these local machines say, they are not a patch on superbikes, which have engine capacities of over 1,000 cc (and thus more power than even 600-1,000 cc sports bikes) and have bikers paying lakhs for them.

Monty, an investment banker in his early thirties who runs an Australian fund in Delhi, bought a Honda CBR 1000RR this year for about Rs 12 lakh. “I am passionate about superbikes because they are fast and exclusive,” he says. But, he cautions, you must “spend time with the machine and grow with it”. Any distraction while riding could prove dangerous. And one cannot be slipshod; he once returned home because he was not wearing proper biking trousers.

Superbikes, it seems, command extraordinary codes of behaviour. Of these, the safety-oriented are fine, but the thrill-oriented are worrisome. Rajat Mitra, a Delhi-based clinical psychologist, calls them ‘monster machines’. Speed is a ‘hit’ for many, he observes, but the problem is that for some it is the only ‘hit’ in their life. And about 20-25 per cent of those in the age group of 18-25, he adds, just cannot temper their need to speed with reason.

The statistics are revealing. About 30 per cent of all bikes that turn up for repairs at Bittu’s service facility in Okhla, South Delhi, are accident cases. “Stray cattle on the street accounts for most falls,” says Bittu, who has just assessed a Suzuki Hayabusa that has arrived from Kolkata for repairs after a dog-hit. Thareja confirms this peculiarly Indian menace; he has suffered three falls in his entire biking life of 27 years, all courtesy stray animals.

Superbiking, Thareja makes clear, demands discipline. “Greater power brings greater responsibility,” he says, “this is applicable to biking too.” Safe biking is an attitude that families can inculcate, he feels. Parents should ensure that kids do not get these bikes too early or too easily. They should graduate to high-power bikes only once they get enough riding experience. “Ayazuddin’s accident is unfortunate,” he says, “but we should draw the right lessons from it.” Superbike marketers need to do their bit as well, offering proper training to all prospective buyers before selling such machines.

Also, stricter licensing could help. Angad, a veteran biker of 13 years, is alarmed that there is still no special licensing for sports/superbikes in India. In the US and Europe, getting the permission to ride these is much harder than usual. “It takes about a year-and-a-half to get a licence to drive a 1,000 cc plus bike in the US. The authorities ensure that riders have done enough biking before they graduate to riding superbikes.” Angad supports special licences for bikes above 600 cc, backed by a network of training schools.

Bittu refuses to name politicians and industrialists who are his clients, but confirms that they have taken a fancy to owning superbikes, if not riding them. “I brief them how to use a bike safely,” he says, “Riding a superbike inebriated, for example, is suicidal.” He recounts an incident of a politician calling him recently to thank him for saving his life. The man was about to ride back home from a party on his Suzuki Hayabusa under the influence of alcohol, but remembered Bittu’s words in good time and took a cab home instead.

Bittu has no inhibitions naming cricketers, though. The superbike craze among them began with MS Dhoni, when Bittu supplied him his first 600 cc Suzuki bike way back in 2005. Since then, the Indian captain has bought several superbikes, and now owns a Harley-Davidson, Yamaha XS650 and Kawasaki Ninja. India’s younger cricketers are equally avid bikers, it seems. Bittu recently sold Hayabusas to Shikhar Dhawan and Ravindra Jadeja. Sourabh Tewary will own one shortly.

Cinema celebrities have only enhanced the cult appeal of superbikes. John Abraham is a famously passionate biker. Like Dhoni, he is among those who “understand the machine” and have the mental tenacity to ride at high speed “with responsibility”, in Thareja’s words. While Katrina Kaif was featured in a recent film riding a bike with dramatic determination, Bollywood’s only female rider of substance is Gul Panag, an actress who rode a Royal Enfield with a sidecar to a hotel with her husband Gurshwinder Singh Attari, a commercial pilot, after their marriage in May.

Among other famous hobbyist bikers, the best known are businessmen Navin Ansal and Robert Vadra, and politician Rahul Gandhi. They do not do group biking, however. They ride in twos and threes, prefer late nights to early mornings, and do not venture very far. “They do it for fun,” says Thareja, “We [Gods] do it for passion.