The Curious Case of Sudhir Gautam

Here’s the fabled Indian cricket fan. He has his own following, and is now the subject of a film 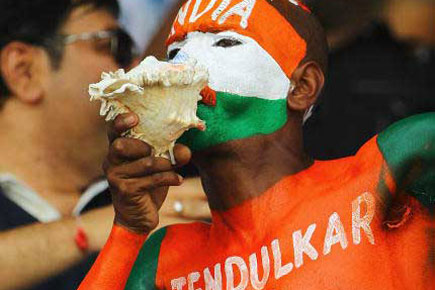 Here’s the fabled Indian cricket fan. He has his own following, and is now the subject of a film


The day India meet Ireland, the first person to turn down a photograph request at the Chinnaswamy stadium is not Sachin Tendulkar. It is his fan, Sudhir Kumar Gautam.

“Let the team bus come first,” Sudhir says to the young man who wants a picture with him at a median near the stadium gate.

Being in position when the Indian team bus arrives is important for Sudhir, a 30-year-old from Muzzaffarpur, Bihar. It is the muhurat shot of his day, a small but important formality. So he is ready — after four hours at the painter’s—and focused. His forehead has a thick coat of saffron. The eyes, nose and mouth are white. The bridge of his nose bears a blue Ashok Chakra. The chin is green. Dried white paint coats his eyelids and a bit of his eyelashes, making him look like a mime artist.

The pale blue pants of an earlier India uniform hang off his wiry body. He does not bother with the shirt. His head is tonsured, except for an island of hair on the top front. It is in the shape of the Indian map. This too is dabbed saffron, white and green. Low at the back he has a braid. His moustache, again, is tricoloured. So is his back. The word ‘Tendulkar’ and number ‘10’ are painted on his back in white against saffron. Fastened on top of his head is a model of the World Cup. In his hands he carries a large, silken India flag and a conch shell. A policeman in a slouch hat stares at him. He is not the only one. Sushrut Jain, a filmmaker from Los Angeles, is shooting Sudhir for a documentary on the Indian passion for cricket. Jain has put up Sudhir in a hotel in Bangalore.

“He accepts help in kind, but he doesn’t make money,” says Jain. “Sudhir looks genuine to me.” The film aims to portray the phenomenal following of Indian cricket through four characters, including Sudhir.

“He could have been a fraud, but he is not,” says Jain. “I realised this when we ran into his acquaintances from Bihar. They wanted to squeeze us for some money. They got Sudhir to stay with them. When we called to set up the interview, they said, “Woh hamare kabze me hai. Aapko hamein kuchh dena padega.” (He is with us. You’ll have to cough up some to get him) Luckily, Sudhir got away, called me and explained the situation.”

Sudhir does occasionally ask people for money. A day earlier he requested a journalist for Rs 500. But he seems to do it only when he is helpless.
The India bus arrives around 1 pm, preceded by the ceremonial siren of an escort vehicle. The police whistles are frantic. Sudhir faces the bus and vigorously waves the flag with his left hand, cutting semicircles in the air. With his right, he blows the conch shell. After this ceremonial invocation, he briskly walks away to find his seat. Sudhir’s bare torso, sunken stomach, shaven head and moustache make him look a bit like the young Mahatma Gandhi. And now he strides with the same energy too. His hard sinewy body hints at a god-given fitness.

“I have strength,” he says. “I have not eaten anything since morning.” He has no need for comfort. He travels ticketless and sleeps anywhere. Jain says, “When we found him, he was planning to sleep in a park.”

Despite Sudhir’s overexposure,  he remains an interesting character. He says he has told off Sharad Pawar. He has cycled from Bihar to Bangladesh to watch India’s World Cup opener and claimed to have parked the bike at Sourav Ganguly’s house in Kolkata. He has also cycled to Pakistan. He has attended almost every match India have played at home since November 2003, which is when his remarkable story began.

That the pedal of Gautam’s life revolves around cricket frustrates his family. He has two brothers.

He does not foresee a change. He is a willing supplicant to the cricketers, chiefly Tendulkar. He calls his relationship with Tendulkar “Bhakt aur Bhagwan ka naata.” (the relationship between God and a devotee) But even when Tendulkar retires, his dedication to Indian cricket will remain, he affirms, adding for dramatic effect, “Jab tak iss shareer mein jaan hai, hum Team India ke liye jiyenge” (As long as there is life in this body of mine, I’ll live for Team India.) Marriage does not interest him. “How will I travel?” he says. “I have made cricket my life partner.”

He admits he does not earn a regular living and does not intend to. When he needs money, he asks for help or does odd jobs. In the past, he has done stints in a milk factory and taught in a school. But there are only so many days you can go to work wearing a shirt.

Whatever his motivations, the depth of Sudhir’s involvement with cricket is not in doubt. Without the passion, it would be impossible to do what he does. Another proof of his commitment is his knowledge of facts—scores, match dates, statistics and suchlike.

He first watched a match live on 1 November 2003. It was India versus Australia at the Wankhede Stadium in Mumbai. He first met Tendulkar on 28 October 2003 at Nariman Point.

“He was a chief guest at a function and I somehow met him,” Sudhir says. “He asked me to come to his home the next morning. I went, got a photograph taken with him. He gave me a ticket for the match. That is how it started.”

Harbhajan Singh is his other benefactor. When Tendulkar or Harbhajan do well, Sudhir rejoices, or genuflects, even more. He has run onto the pitch to touch their feet on occasion, angering security. He says he has gifted two conch shells to Sachin and Harbhajan. Asked where he got the shells from, he says, “Chennai. You get them on Marina beach.”

How long will such an existence continue? Filmmaker Jain, who spent a few days with him in Bangalore, says, “He doesn’t have a plan.” But he does have an ideal. Chacha, the famous fan of Pakistan cricket. “I stayed with Chacha when I went to Pakistan. Just as he is Chacha for them, I want to be Brother for Indian cricket followers,” Sudhir says.

A touch of vanity now: “When India play outside Asia, they don’t do so well. Meri kami mehsoos hoti hai (They miss me). I wish the BCCI would send me to matches outside the Subcontinent on their expense. I don’t want food and shelter.

It was on this point that Sharad Pawar and I had a fight.”