Not a Pawn In Anyone’s Game 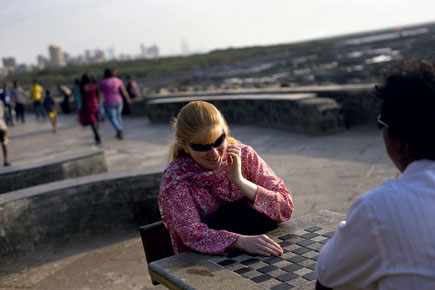 
If neither chess player gets the decisive advantage, it is tradition to shake hands over a draw and head for the snack stand or something. Not, though, when one of the players feels certain of victory. Not in the final of the Nationals. And certainly not when you enjoy stomping on all comers, as does Vaishali Salavkar, the 2012 National women’s champion (visually challenged).

But when it’s your younger sister across the board, you may find yourself saying “Sarita, agreeable to a draw?” in the hope that she accepts the offer so that you can share the trophy as joint National champions.

But Sarita turns it down. Is it pride? Or adrenaline? She plays aggressively, riskily. In the melee of the mid-game, Vaishali attacks one of Sarita’s black pawns. This is a trap. Sarita brings in her queen to bolster the pawn. Voila, Vaishali’s waiting knight springs into action, ‘forking’ the queen and the rook standing nearby. Tough! Choose, dear sister, between losing your queen or rook. Either way, the army is decisively weakened. The jig is up. Caught between conceding the game now and a certain defeat later, Sarita chooses the less painful option. In this way, Vaishali Salavkar, 39, holds off her sister to become champion for the sixth time. No amount of prior winning, though, could have prepared her for the sheer weirdness of playing her sibling.

“Sisterhood does not count in a chess game,” says Vaishali of the psyche of the chess player. “Except that it does, and she is my sister.” Weeks after the championship, the sisters have yet to talk to each other. It will happen, but only when it happens.

Vaishali Salavkar, Mumbaiite, chess champ, mother, professional masseuse, is no stranger to getting pulled in opposite directions by chess and family ties. In 1999, when she was starting out in the game, she and her husband of three years had a baby daughter, Tanvi. The birth brought along a few existential questions for Vaishali. Would she be able to juggle motherhood with chess? More fundamentally, she wondered, can a blind mother care for a child? The obvious answer was, why not? But she was in an irrational funk at the time. To decide the matter, Vaishali went AWOL from her mother’s home, where she was visiting, to play a chess tournament with her two-month-old baby in her arms and with her sister Sarita in tow. Vaishali’s husband, Narendra, who is also blind, had phoned her that day; “I’ll be at my uncle’s,” she had said, “there’s been a death in his house, and I am visiting him.” But she had landed up in Alandi instead, the temple town near Pune that was hosting the tournament.

In Alandi, Vaishali played with her baby in her lap. “Please don’t cry now,” she pleaded with Tanvi as the pieces were lined up. If the infant began crying to be nursed, she might have had to adjourn the battle. Between matches, she would whisper soft nothings to Tanvi, surrounded by other players who came to cootchie-coo and bless the little bundle. Tenderness! But the scene would turn surreal within minutes. Once the break was over, everyone would get back to the carnage over the chequered board, the kamikaze gambits, the flank strikes, the half-premeditated traps, and the delightful spectacle of the King Hunt in the endgame, where the orphaned king gets kicked around the board by a bloodthirsty lynch mob.

At club level, that happens often. At the Grandmaster level, you don’t see bloodbaths—great players calculate as many as 12 moves in their heads, and nimbly sidestep the more bloody lines of play, barring the few overly aggressive Grandmasters still alive. At club level, though, players can only see maybe two or three moves ahead, and mistakes are legion, and you can still see the odd demented donnybrook. If Grandmaster-level chess is near-telepathic kung fu, local chess is a wild streetfight by comparison.

And so the club-level tournament at Alandi left Vaishali’s nerves frazzled. She ended with a negative score, one she was too zapped to remember exactly. It had been a brave move for Vaishali just to show up there. But this was back in 1999, when she was too much of a tyro. She returned home to her worried mother Nutan, her concerned husband Narendra, and, as it turned out, the onset of a mental meltdown.

“I lay in bed and kept crying,” she remembers impassively. She was in clinical depression, and she kept telling herself she was an awful mother, the baby was suffering ill-health under her neglect, and if there was any justice in the world, it would be because she herself was about to die. Though a doctor could have challenged her self-diagnosis, and the government-run JJ Hospital in nearby South Mumbai did, Vaishali made her sister and fellow chess player Sarita promise to marry her husband—“after I am dead, but not right now, okay?”

She laughs at the episode today, but was serious back then. Though hale if not hearty, the future champ remained bedridden and weepy for six months, right until February 2000, when her husband played the gambit that bounced her back from the blues. Narendra, 48 today, was a TV technician whose eyes had progressively weakened to the point of total blindness. Using his tech skills, he had rigged the home phone up with a tape recorder. The recorder would switch on whenever Vaishali called and invite her to “leave a message, because I’m not available”. Fifteen days of this treatment, and she was worried enough to rush back to her husband’s house to check on him. It was a gambit that could have gone either way. But Vaishali’s blues never returned. Her mood swung the other way, and to this day, she is an extrovert—at least on the surface.

In the years since, Vaishali learnt to switch off everything but the chessboard in the tournament room. She would, of course, worry herself sick about her daughter, now a happy 12-year-old, every now and then. But she learnt that this was normal. This was not a word she would have associated with herself—’normal’. After all, she’d grown up an awkward child, struggling to find place in society. Born with a condition known as albinism, Vaishali is not only partially sighted but also melanin-deficient. Her skin and even her eyebrows are white. The right eye is sightless, and the left can discern outlines, not faces, unless they are six inches away.

For her, chess is both her identity and a social calling card. Her trophy closet has no fewer than ten trophies. It is chess that gives her a sense of worth. Her career as a champion has also brought with it a sobering realisation of her limitations. In 2005, the All India Chess Federation for the Blind sponsored her attendance at the Feminine World Championship for the Blind in Athens, Greece, where her record was two wins, six draws and a loss. Vaishali began chess a little late, and it showed in Athens. She had learnt to play only during her higher senior secondary years of school, taught by one of her teachers as an extracurricular course. She had managed to beat him, which sparked her interest in the game, and was fortunate enough to have the kindness of several subsequent coaches who wanted to see her perform even better.

Today, Vaishali is famous within the close-knit community of visually-challenged chess players across the country. She has her showing in national tournaments to thank for that. “The blind have a good grapevine,” she says. “It takes two hours for news to spread across the city.”

Among the sighted, though, this national champ’s fame is pretty much local. “Folk see my photograph in the local papers and say, ‘Hey, look, you’re in the news!’” But Vaishali is partially-sighted, and poor at identifying faces. “They say to me, ‘Hey, you passed by me and didn’t recognise me!’ But I can’t.” She smiles.

In contrast to her life, though, she prefers fairly undramatic chess play. “Some players are flashy. They’ll come up with a move out of nowhere, and ‘checkmate’. I am a tortoise. Take a pawn here, another pawn there. If the opponent attacks, I become defensive,” says Vaishali. Her favourite opening strategies are the Guioco Piano (‘The Quiet Game’) and Scotch Opening, which has volatile possibilities. Playing with black pieces, Vaishali avoids the aggressive Sicilian Opening, preferring the various King’s Knight formations, where both players’ kingside knights hop over the pawn phalanxes to exert pressure on the central squares.

To square off with sighted players, Vaishali plans to take advanced coaching. Attaining a decent Elo (a chess rating system) score is something she is working on, having beaten a few players rated 1800 Elo, which is near the top of club class but way below Candidate Master level (2200 Elo wins the title of Candidate Master). “Six months of coaching,” she says, “and I know I can do it.”