Kho-Kho in the Time of IPL

In the shadow of cricket’s glamour, an age-old sport is experiencing a quiet renaissance 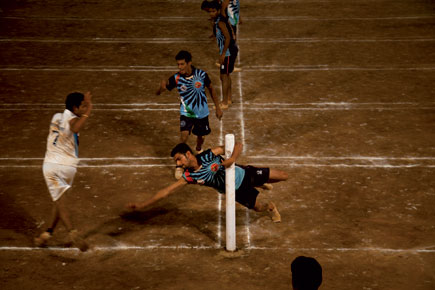 In the shadow of cricket’s glamour, an age-old sport is experiencing a quiet renaissance


MUMBAI ~ On a quiet Sunday afternoon, Lalit Sawant and Vinit Chavan, former kho-kho players and now organisers, stand at the entrance of CKP Hall in Dadar, Central Mumbai. They reminisce about their playing days, and laugh at the memory of some of the prizes they received.

“A set of Promise toothpaste and brushes,” Sawant says.

That was in the 1980s. Things have improved, but they need to get even better. So Sawant, Chavan and seven other ex- players (Ejaz Shaikh, Sandeep Bagwe, Datta Nandoskar, Shrikant Gaikwad, Manoj Choudhari, Vikas Kuskar and Dalesh Desai) formed the Gunta Group. Last weekend in Mumbai, they organised the inaugural Kho-Kho Premier League. Or just KKPL.

In the old days, aspiring actors would take on the surname ‘Kumar’ to improve their chances of making it in the film world. Now sports events call themselves some ‘Premier League’ or the other. Many believe that blindly aping cricket’s loud, glittering circus and expecting results is naïve. But that is an elitist view. At the ground level, it works, at least to some extent. Sponsors part with a few more pennies. Players get excited that their humble sport has also acquired a patina of glamour. Spectators get curious too. The event simply becomes more saleable.

This is evident at the KKPL. Hosted in the south-western corner of Shivaji Park, the event attracts at least 1,000 people every day. Film and political personalities well-known in Maharashtra attend as chief guests. Importantly, the players get incentives. The winning team, Thane Thunders, received Rs 65,000. Ahmednagar Heroes captain Amol Jadhav, named ‘player of the tournament’, received a 32 inch LCD television and a 2 gm gold coin. Runners-up Mumbai Riders got Rs 55,000. All teams and individual award winners go home with something other than clothes caked with Shivaji Park soil. The sums quoted above may seem ordinary to the upper- middle-class, but are significant for young men with a monthly income of Rs 15,000-20,000. Most of them have small jobs, typically with banks, Railways, or the Maharashtra State Electricity Board. Player of the Tournament Jadhav, for example, is a junior clerk with Western Railway at Mumbai’s Mahalaxmi station.

The CKP Hall in Dadar is where almost 50 players and officials involved in the tournament stay, in two dormitory-style rooms with about six toilets and bathrooms. It is not exactly the Oberoi Trident, the home of IPL teams when they are in Mumbai. There are no gleaming pianos in the lobby, no white Mercedes Benz bus waiting to take the players to Shivaji Park. CKP Hall is a crumbling old building. But there are also festive elements to it, as it is a multipurpose venue used for weddings and celebrations. There is a yellow and pink stage curtain, which may not be grand but is intended to be. Garlands of fairy lights stretch across a wall, switched on even in daylight. The players nap on mattresses right below the lights. It is a fascinating sight. In another corner of the floor, some of the officials sit cross-legged on mattresses and play cards, perhaps wondering when kho-kho will rise in the hierarchy of sports and attain the level of king or ace. A man wipes washed plastic bowls and spoons used for lunch.

Though it is quiet at CKP Hall, there is a sense of anticipation. It is the evening of the final, after all. Nanasaheb Zambre and Yusuf Pathan, former players and now coaches and referees, are about to get ready to leave for the venue. They speak about the event and the sport.

“This is the first time we have tried a format like this. Players from different regions are playing for a franchise. They haven’t had time to gel. So we have had mixed results,” says Zambre, leaning against a wall. He is from Pune, with a fair complexion and receding hairline. He speaks in chaste Marathi and seems the kind of man who, when asked his name, would say it in full.

Pathan is dark and has a thick moustache. He is from Aurangabad and speaks fluent Marathi. He has done a PhD in kho-kho from Dr Babasaheb Ambedkar University. A man of many facets, he is also known for his skills as a compére. He has hosted functions featuring Ajit Pawar, the currently disgraced Deputy Chief Minister of Maharashtra who is also president of the state kho-kho body. In the coming days, Pathan will conduct an opening ceremony in Bidkin village near Aurangabad, where RR Patil will be chief guest.

The players are in repose now, but in a few minutes they will explode into action. Kho-kho is a frenetic sport, demanding pace, stamina, an ability to dive and change direction. A match has four innings, each lasting a maximum of nine minutes. There is a break of five minutes after each innings. The half-time break is nine minutes. In all, a match lasts around an hour. An hour over which the players will sprint, stop suddenly, twist and lunge over a 29×16 metre field. And all they wear are ankle and knee caps, sometimes not even those. Vinit Chavan, the former player and organiser, says, “Most kho-kho players have scars at the toe, elbows and hip bone.”

Unless you are unfortunate enough to have grown up in South Mumbai, or its equivalent areas in other parts of India, you must have played some kho-kho. If not, here’s a basic description of how it is played. There are nine players a side. One team chases, the other defends. One chaser runs after a batch of three defenders, with eight other chasers kneeling along a line, each of whom faces the opposite direction of his teammates on either side. If the chaser who is chasing gets tired or feels a kneeling teammate has a better chance of tagging a defender, he touches him on the back and says ‘kho’. The teammate renews the battle while the earlier chaser squats in his place. The team that tags all opposition players in the shortest time wins. Conversely, the defenders’ job is to dodge chasers as long as possible. At the KKPL, player of the tournament Jadhav clocked 26 minutes in seven matches, an average of almost four minutes per match. Considering that staying ‘not out’ even for two minutes is an achievement, an average of almost four is phenomenal. Jadhav also racked up 13 victims while chasing.

The toe and the front of the foot suffer damage because, while giving the ‘kho’, the chaser’s foot has to be planted in a marked area even when he is running at full speed. Imagine Dale Steyn steaming in and having to stop suddenly at the crease. The elbows and hip bone bear the brunt of the falls. Often, chasers leap at defenders like goalkeepers at a ball, landing on their torso and arms. This is why almost all players carry a large smear of mud on their chests.

Watching the contest between chaser and defender is thrilling, and would not be out of place on National Geographic. When the chaser rises from his sitting position he spends the first few moments crouched, watching the defender’s feet, because once the chaser chooses a direction, he is not allowed to change it. Decision made, he takes off after his man. In the meantime the defender is also watching the chaser’s feet, so that he can hoodwink him at the last moment. In a wildlife chase, there is no physical parity between predator and prey. Panic and futility mark the flight of the hunted. Kho-kho, on the other hand, is purely sport. There is a sense of catch-me- if-you-can as the twinkle-toed defender, looking over his shoulder, taunting and teasing the chaser, runs figures of eight through the line of kneeling chasers. Naturally, there are disputes with umpires. Chasers often claim they touched the defender and vice versa. The umpire must be alert all the time to catch the slightest contact between chaser and defender. He does not have the benefit of a third umpire.

There is a quiet confidence about the brooding, ebony-hued Amol Jadhav. The 26-year-old and his brother, Yuvraj, are stars of the kho-kho world. They hail from one of the nurseries of the sport— the village of Kavathe Piran in Sangli. Kavathe Piran was also the home of Maruti Mane, the famous wrestler of days past who was an Asian Games gold medallist and an Olympian. While Amol led the Ahmednagar Heroes in the KKPL, Yuvraj captained the Sangli Smashers. In a sport where even a few thousand is a big amount, Amol claims to have earned over Rs 2 lakh from prizes in one year. Yuvraj received a Tata Nano for being named ‘Best Player’ at the State Championship in Aurangabad recently. That is slightly better than a Promise dental kit and 5 kg pack of Shine It.