In the Line of Fire 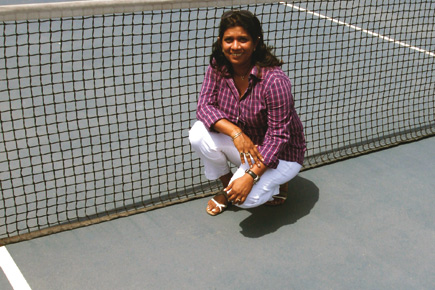 
Juan Martin del Potro of Argentina was playing Carlos Moya of Spain in the 2006 ATP Kingfisher Open in Mumbai. Del Potro hammered in a serve from the ad court. Moya thought it was a fault. Shreeram Gokhale, the service line umpire, thought the serve was fine. So did the chair umpire.

Moya, in red sleeveless vest and red bandana, did not like it. Six feet three inches of Spanish rage walked up to the Made in Pune Gokhale and asked, “Can you see?” All that was missing was the sword of Zorro. Gokhale did what umpires and linesmen are supposed to do. Stay cool.

“You have to show you are in control,” says Gokhale, a sports reporter with Pune’s Sakaal Times who does tennis officiating part-time. “If you appear unsure of your own decisions, the player will question more calls.”

Tennis umpiring, like umpiring in all sports, is an unconventional and draining job. You cannot lose concentration (on-court tennis officials have to test their eyes every year and send the report to the International Tennis Federation). A lot hinges on a call. Players can get abusive and the travel is tiring. But there are perks. There is the satisfaction of discharging an important responsibility in a sport you love. There is the excitement of working in some of the world’s greatest tournaments.

“Travelling around the world, being around tennis and working in shorts, what better life can there be?”says senior tennis umpire Norm Chryst, who took up the profession after fighting in the Vietnam War and a stint in the corporate world. Chryst proudly says that his suits from his days in the world of business are wrapped up in plastic.

Gokhale is no Chryst yet, but he is doing alright. Having paid his dues officiating in places like Kazakhstan and the far corners of India, he is now an ITF White Badge official (white is where you start in the hierarchy of tennis officials, followed by bronze, silver and gold).  He is a fairly regular feature at the Grand Slams. Last year, he was a linesman at the Australian Open, where he worked in matches involving Novak Djokovic, Gael Monfils and John Isner. Last year, he also officiated in the Wimbledon qualifiers. This year, he has graduated to the main tournament. He has sent his measurements for the uniform blazer, shirts, trousers and shoes.

“It’s all Ralph Lauren, so it’s unlikely I’d have bought it on my own,” Gokhale says as he prepares for the trip.

The umpiring staff can broadly be divided into three types—line umpires, chair umpires and referees. The linespersons and the chair umpire are on court. The referee is not. He makes an appearance if the situation warrants it.

Iyer, an Indian and a mother of one, is in a sport known for wild characters and liberal use of profanity. Though the terror of John McEnroe is long gone, there are plenty loose cannons around to test an umpire’s tolerance. Marat Safin once called Chryst “fucked up in the head”. Andy Roddick once asked umpire Jorge Diaz, “Are you an absolute moron?” Serena Williams, of course, is guilty of the most disturbing outburst against an official. When a lineswoman called a footfault against her at a crucial point in the 2009 US Open semifinal, Serena reportedly said to her, “If I could, I’d shove this ball down your throat and kill you.”

Iyer says cases like McEnroe or Serena are rare. “No one has given me a tough time,” she says. “Players from the US or Australia, however, tend to have an attitude towards officials from developing countries. You have to let them know you know the game and the job.”

For Iyer, the language is not a culture shock either. She comes from a tennis family and has played competitive tennis herself. In fact, abusive language sometimes leads to amusing missions, like trying to decipher when players are cursing in languages other than English.

“I’m familiar with some Russian expressions,” Iyer says. “Local officials bring you up to date. When you catch the players, they are surprised. At times they are amused. Sometimes they try to give an excuse and spin a tale.”

Things get funnier, Iyer says, when you try to repeat the local phrase but the pronunciation sounds funny.

Despite the more volatile nature of male players, Iyer prefers them to women. “From a referee’s point of view, it is perhaps easier to do men’s matches,” she says. “With men, the problems are only on court. Women can get upset by several small things. Besides, at a women’s tournament, you are more susceptible to certain situations. As a referee, you have to be on your guard.” Occasionally, political factors add to the pressure. Iyer mentions a Fed Cup tie between Israel and Ukraine she officiated. “The tie was played in a closed stadium in Ukraine. There was a rigid security procedure. My job at the tie was not just to ensure fair competition but also the players’ safety.”

Gokhale suggests that it is not very difficult to know when a player is cursing. “Whatever the language of the outburst, it is likely to contain the F-word,” he says.

He too has been fortunate enough to avoid real troublemakers on the court. “Except for one occasion in India, when a player’s brother ran on court and pushed a linesman, because he did not like a call.” It was a grave offence that warranted the stiffest penalty—the player was defaulted and his opponent won the match.

The surface of a court makes an umpire’s job harder or easier. Clay is easier because the ball leaves a mark after bouncing. As seen during the recent French Open, players can request the umpire to check the ball mark. However, this means getting off the tricky high chair and back every now and then. Grass too provides some clues to umpires—the chalk rises when the ball kisses the lines. However, things can get hazy after a few days during a grass tournament. Patches of the turf wear off, making it harder to see the lines. The appearance of a hard court, on the other hand, stays constant. But the ball does not leave a clear imprint on it.

An umpire or a referee’s daily routine is tailored to fit the demands of his job. Sometimes this means sacrificing the small pleasures of everyday life. French umpire Pascal Maria, given the honour of chairing the 2008 Wimbledon final between Roger Federer and Rafael Nadal, gave his customary double espresso a miss that morning. The previous day, he urinated 10 times. This was to ensure he would not have to take a loo break in a match expected to go the distance. It ended up being a five-set classic, with rain breaks, with Nadal triumphing in near darkness.

Having spent a dozen years in a sometimes chaotic career, there is one thing Iyer insists on.  “Earlier, I would be irritable after a couple of long days at a tournament. So I started doing pranayam in the mornings.”