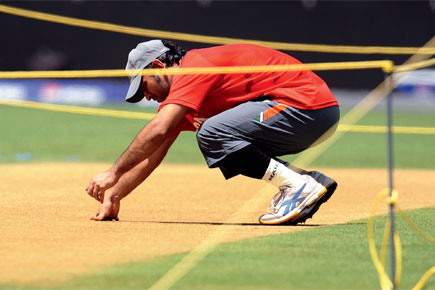 
The setting was the post-match press conference after the Adelaide Test between India and Australia. The press meet hadn’t yet started, and I was having an informal conversation with a senior Cricket Australia (CA) official. He asked me if there was outrage back home at India’s abject capitulation. On being told that fans were losing patience, he asked me a pertinent second question, “Who are you playing next and how many Tests are you playing at home over the next year?” I told him India were playing New Zealand at home next, and this series will be followed by visits from England and Australia. In all, India are playing the next eleven Tests home. Having heard India’s schedule for 2012- 13, he suggested rather seriously that “by this time next year you will once again be on the verge of becoming the number one Test side in the world”.

He is right. Play at home and win, that’s the mantra of Test-playing nations. As the Aussies crushed the Indians at home, Pakistan made a mockery of Andrew Strauss’ famed world number one team in Abu Dhabi. England collapsed to a dismal 72 all out in the second innings of the second Test, losing 0-2 in the process.

The issue of home advantage came up yet again in Virender Sehwag’s post match press conference in Adelaide. In trying to put up a spirited counter, Sehwag suggested that the Australians too had lost 0-2 when they had travelled to India last in October 2010. In fact, they were beaten 2-0 in 2008 and again in 2010. Gautam Gambhir too had brought up the issue of home advantage on the eve of the Adelaide Test. Commenting on being exposed on fast bouncy pitches in England and Australia, Gambhir was quick to suggest that we should prepare rank turners at home when foreign teams visit India.

“There is nothing wrong in it. Every country prepares pitches according to their strength,” Gambhir said. “We too should do that. When Australia, South Africa and England tour India, we should also prepare rank turners on which their temperament and technique would be tested. We shouldn’t be afraid to prepare turners against England or Australia. Only then will we know if they are mentally strong. It will also be interesting to see if they still chit-chat and question our techniques then.”

To a large extent, Gambhir is right. All you get in England and Australia are swinging, fast pitches made to suit the home team’s strengths. For example, the Sydney track, which aided spin till a few years earlier, has been redone and is now fundamentally different from what it was four years ago. It is also important to acknowledge that there is no accepted definition of a sporting pitch. There is no way that an Australian or English pitch can qualify as a ‘sporting’ pitch while an Indian pitch is decreed a ‘turner’. And so there is no shame in playing to our

Just as the Aussies crushed the Indians at home, Pakistan made a mockery of Andrew Strauss’ famed world number one team in Abu Dhabi strength at home.

The moot problem, however, is different. It is not about winning back home. It is about the changing world of Test cricket where every decent team wins with home advantage but is unable to cope with alien overseas conditions. It is about how newer forms of the game, T20 domestic leagues to be precise, have affected batting techniques, making batsmen who could adapt to all conditions a rare and disappearing species. It is about the game turning lopsided, with home advantage becoming the single most critical factor in dictating results.

Home advantage, it must be acknowledged, was always a significant factor in cricket. However, it wasn’t the only factor till a few years ago. Steve Waugh and later Ricky Ponting’s Australians were considered two of the best Test teams of all time because they had mastered the art of winning overseas. This included a decisive Test series victory in India in 2004-05. Applying the same yardstick made Clive Lloyd’s West Indians the best team to have ever played Test cricket. They could come to the Subcontinent and win Test matches convincingly. The Indian team of the last decade too could make such adjustments and be competitive overseas. This explains India’s 1-0 series win in the Caribbean in 2006, 1-0 win in England in 2007, 1-2 loss in Australia in 2008, 1-0 win in New Zealand in 2009, 1-1 draw in Sri Lanka in 2010 and 1-1 draw in South Africa in December 2010. India, across all countries and all conditions, was competitive. This was a period when India’s famed batting quartet, Tendulkar, Dravid, Laxman and Ganguly, with Sehwag at the top of the order, dominated Test cricket. They were men who had scored in all conditions and could adjust to all situations and circumstances. More importantly, they were at their prime.

Things, however, have changed dramatically over the last couple of years. And the transformation has gone hand in hand with T20 cricket gaining momentum. The Indian Premier League (IPL) and Australian Big Bash are now the top drawers in these two countries. These T20 leagues have killed what used to be cricket’s off-season. Importantly for the global game, great players used the off season to train for alien conditions. Ganguly, for example, went to Australia during the off season to train for the 2003- 4 Test series Down Under. The result was the amazing 144 in Brisbane in the first Test of the series, which set up India’s best ever Test series performance in Australia. Though the series ended 1-1, it was one in which the Indians dominated most of the time. Zaheer Khan credits his stint with Worcestershire in 2006 for having mastered the art of reverse swing and becoming a better Test bowler. Sachin Tendulkar too went and played a bit of cricket for Lashings when he was recuperating from his tennis elbow, which helped him make the greatest of comebacks.

Such opportunities are lost to the new crop of Test batsmen. With cash-rich T20 leagues eating into their already cramped calendar, preparing for overseas series is no longer priority. In the little time they get away from the game, it is imperative they rest their already overstretched bodies. Acquiring new skill-sets is no longer feasible in contemporary Test cricket, making the game almost wholly dependent on home advantage.

More than an Indian series loss in Australia or an English drubbing at the hands of Pakistan in Abu Dhabi, it is important for the health of Test cricket in the future that administrators take notice of this trend. And in doing so, freeing up cricketers’ schedules has to be the starting point. A very senior BCCI official, speaking on condition of anonymity, put it aptly, “The most important reason for the failure is that our batsmen looked amateurish against the pace and bounce of the Australian pitches. It was the same in England, where they weren’t able to negotiate the swing. With our weather it is impossible to replicate these tracks or conditions. Ideally, we should start using Dharamshala, for it offers conditions like those overseas. We should set up an academy in [that Himachal town], and free up the players’ schedules so that they can train there for at least a month every year.”

It is indeed a refreshing thought and is likely to be taken up in the next BCCI meeting on 13 February. It is important for the BCCI to demonstrate that it cares. That it is concerned about India’s declining stock in Test cricket. Rahul Dravid, in an interview to Channel 9 before returning home, said, “India needs to be a strong Test cricket playing nation for the sake of world cricket. There are not too many countries playing cricket and if India is competitive in Test cricket, it does make a difference. There are areas we need to improve, especially in these challenging times, but I am hopeful.”

Indian fans, however, need convincing that there is hope round the corner. Eight straight overseas Test losses are indicative of a systemic failure and point to a long rooted malady. They prove that India has gone back to the early 1990s, when we were a great Test team at home but minnows overseas. Fortunately for world cricket, India were an exception then and felt a real urge to improve. Now we are no longer the exception—for, Australia, England and South Africa, the three best teams going, are equally vulnerable in overseas conditions.

Cricket is facing a crisis. The India- Australia and England-Pakistan series have shown that. The game is under threat of becoming dull and predictable. The element of uncertainty, essential to the well being of Test cricket, is disappearing. We need corrective measures. But is anyone listening? If yes, who’ll bell the cat? This is a problem because the ‘cats’ (read profitable T20 leagues like IPL and Big Bash) are controlling the games’ finances and are the real draw for spectators. Crowd support for the Big Bash was proof that T20 is here to stay. What does this mean for the future of Test cricket? Is the shorter format the future of world cricket? I don’t have an answer. What I do know is that cricket is fast becoming like tennis, with its own version of clay, grass and hard court specialists. Indians and Pakistanis excel on turners, the English in swing-and-seam- friendly conditions, and the Australians and South Africans on pitches that offer pace and bounce. With little versatility left, God save Test cricket.