With the Indian team and the cricket media, the more things change, the more they remain the same 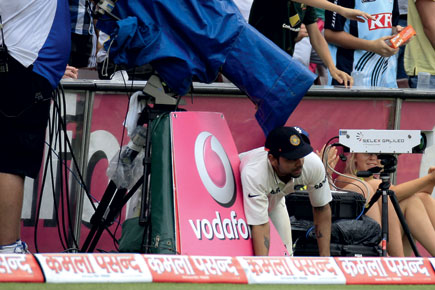 With the Indian team and the cricket media, the more things change, the more they remain the same


PERTH ~ It started as one of the many run-of-the-mill conversations that you have in an elevator, but soon turned more serious. I was on my way up to the 20th floor of the Inter Continental Hotel in Adelaide. In the elevator was present a very senior Indian middle-order batsman, the media manager of the Indian team, GS Walia, and another Indian journalist, Harini Rana. Walia started the discussion with a lament, “How can the Indian media write things like the players have visited a vineyard and indulged in wine tasting when nothing of the like happened? We were all in the hotel and only a few of us went out to the RM Williams leather store to buy shoes and jackets. These comments will only provoke fans further back home.”

The senior cricketer in the lift hadn’t said a word till Walia finished his rant and left for his room on the 7th floor. Rather, he was looking exasperated and somewhat stunned after hearing what had been reported back home. But as the elevator door opened on the 20th floor and he walked out, he muttered in annoyance, “One day there will be a landmark judgment passed against the Indian media and then….” His voice trailed off.

It wasn’t difficult to understand his angst. At the time this exchange took place, India had suffered three straight losses in Australia, and prior to that, four in England. That’s seven straight Test defeats overseas. The eight-day gap between the Perth and Adelaide Tests added to the agony. Players had to remain cloistered in their hotel rooms, for, anywhere they went, it was interpreted as distraction from the job at hand. There are journalists stationed in the lobby of the team hotel and players are being monitored 24/7.

Bristling at the injustice of it all, a relatively young member of the Indian team, on his way to the team bus, said, “It is a bizarre situation. We have lost cricket matches, not indulged in any criminal activity.” Another senior cricketer, when told about the wine-tasting report, said, “We are gradually getting to a situation when there will be no contact whatsoever between the players and the media. If the media decides on writing fiction, we will also not entertain them. Why are they intent on humiliating us?”

He hadn’t finished yet. “When England lost the Ashes in 2006-07, Freddie Flintoff, the captain, was found drunk in the lobby of this very hotel at 5 in the morning. He was sleeping on the concierge desk. He was so drunk that he had little recollection of where he was or what he was doing. Yet no English journalist filed a report on the incident. In fact, the entire English media had come together in defending the honour of the team and the player. We know we haven’t played well and we are trying our best to turn the tables. We need the media to back us, not stifle us.”

These reactions need to be placed in context to be understood better. There was some needless outrage in India when the media reported that the Indian players had chosen a go-karting trip over practice in Perth. The reality, however, was different. Or at least, it had layers. Firstly, there were seven days between the Sydney and Perth Tests. Second, the team went go-karting at 5 pm. Under normal circumstances, neither the Australians nor Indians practise after 4 pm. Third, the Indians practised the next three days before going into the Test on 13 January. Yet, go-karting was singled out as evidence that the players weren’t serious enough. In fact, I was criticised for voicing a moderate view on television that there’s nothing wrong in going go-karting or cycling with seven days to go for a Test match and that such a move might have the desired effect

of helping the team bond. Before the Perth Test in 2007-08, Gary Kirsten, who had just taken over as coach of India, had taken the team out for a two-hour cycling session. It proved helpful and the team played fantastic cricket at the WACA. This time, however, they were outplayed by the Australians. But that doesn’t mean that go-karting was responsible for the Indian defeat or that the players weren’t serious.

Why does our televisual media cover cricket the way it does? Why was go-karting a national headline on Aaj Tak, India’s leading Hindi satellite channel? Samip Rajguru, Aaj Tak’s senior special correspondent who’s covering this tour, says, “We try to reflect the voice of the people, give vent to their feelings. It was a story that is indicative of the sentiment of the people. We also report the achievements of the players as our lead headline. So it is not as if we are only intent on doing negative stories.”

Things are different in Australia, but even their journalists and players have tense phases. Senior Australian cricket writer Gideon Haigh says, “The fundamental difference is that we don’t have the commercial pressures of the Indian media here in Australia.” Haigh adds, “In Australia, the Australian cricket team is sports news and is confined to the sports pages of newspapers. In India the cricket team is national news and is fodder for the entire population. In Australia when the going is good, the players and the media have excellent synergy. [But] Things do turn ugly when the team isn’t performing. The reason behind this is the non-presence of many former cricketers in the news media space, which isn’t very well paid in Australia, preventing many former players from gravitating to this space. So the players tend to feel that the media doesn’t always understand their challenges and problems.”

Whatever the Indian media’s compulsions, the reasons for India’s failure have to do with issues that have been highlighted in this magazine over the past few weeks. The moot questions are, does India consider Test cricket its top priority? Secondly, will the BCCI stop criticising the media for rightly blaming inconsequential tournaments like the Champions League as the real cause behind player fatigue and injury? Finally, will the BCCI ensure Indian players get enough rest?

It is the duty of the media to highlight these issues and to put pressure on the BCCI to take correctives. The BCCI cannot begrudge them that. However, unreasonable stories like the go-karting or winery excursions will not help our cricket. Nor will such stories enhance the anyway dubious reputation of the media. Instead, these stories will divide the team and the touring media who need to feed off each other at times of crisis.

Perhaps, the wedge has already been created. But while the media is partially responsible for this, so is the team management. First, India does not have a suitable media manager. GS Walia, a perfect gentleman and senior BCCI official, is struggling to fulfil the demands of the job on this tour. If the BCCI wants to send GS Walia to Australia as a perk, it can do so. But it should also send a professional media manager who can deal with the pressures of the job. It is unfair to expect Walia to live up to the needs of the 24/7 media. Some of India’s press conferences on this tour were a cause of much amusement. Journalists were asked to translate answers for their Australian colleagues and the Indian players have been more than an hour late for the press conference on more than one occasion. Wridhhiman Saha’s press conference in Adelaide was a classic example of how a media session should not be conducted. First, it was scheduled for 12.30 pm, just half an hour before a press conference with the Adelaide Oval curator. There was no sign of Saha. At 1.20 pm, the local media officer, Rebekah Rosser, suggested to waiting journalists that perhaps the curator could be spoken to first. It was disgraceful. Saha turned up at 1.45 pm and was hardly the best choice to handle a press conference. He understood little of the questions asked, and most of the critical questions were left unanswered. He did try answering in Hindi, which was translated into English. But the difference between the question asked and the answer provided was like chalk and chocolate.

Umesh Yadav’s press conference in Perth was no better. When Yadav was asked about India’s stand on the DRS, he could do little but smile. Understandably, he did not want to say a thing about the BCCI and no one came to his rescue. Finally, we had to move on to the next question without being able to solicit an answer from Umesh, one of India’s few successes on this tour.

In Sydney, the situation was so bad that the Australian media manager, Philip Pope, once had to stand in to conduct an Indian media session.

I must finish this report by touching upon the media’s handling of Sachin’s son, Arjun, in Mumbai. Arjun is just 12 and has just about started playing organised cricket. He hasn’t done anything yet to deserve regular media coverage. Yet, there are four or more OB vans outside every match that he plays. Unfortunately, the boy has little choice and has to bear a high level of intrusion into his young life. In one of our casual conversations, Sachin said, “I don’t know why this is being done. In fact, I have called a few journalists and told them that the only outcome of this is Arjun will start hating them from an early age.”

It is time for us in the media, as well as the  BCCI, to look in the mirror and ask this fundamental question: ‘Are we fulfilling our responsibilities towards each other with integrity and honesty?’ From the evidence at hand in Australia, we are not. We are heading towards a collapse of trust. One can only hope that the issues raised during this tour trigger the desired measures.